In Prison and Desperate, But Not Alone 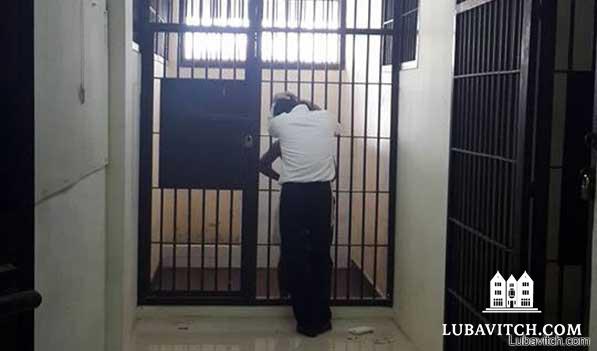 An emotional embrace in a Thailand prison was captured in this photo
Photo Credit: Nati Hadad

The photo of a rabbi reaching through the prison bars embracing the inmate on the other side, begs for background.

Nati Hadad, who captured the image that soon went viral, says it was a heartbreaking moment. He had gone with the Chabad rabbi to bring food to the young Israeli prisoner whose desperation was driving him to the brink.

“You do not want to find yourself in a prison in Thailand, where there are no beds or bathrooms, just a small pipe with water and a hole to relieve yourself, Hadad said. “Just from seeing these prison cells you could become sick.” Hadad runs a local business and knows the lay of the land well enough so that he’s begun helping foreigners stay out of trouble.

Some 50,000 Jewish tourists a year come to Koh Samui, an exotic Island where foreigners sometimes get into trouble. “While it is not often, it happens from time to time that we have to attend to prisoners, mostly from Israel,” said Rabbi Mendy Goldshmid.

As the local address for everything Jewish, Goldshmid and his wife Sara field calls from many tourists who need assistance “with doctors, the police or prison wardens.”

Hadad waited when the prisoner asked to pray with the rabbi. Goldshmid leaned forward and prayed with him. The inmate reached through the bars for the rabbi’s kippah, placing it on his head before reciting the Shema prayer.

As Goldshmid, now covering his head with his sleeve, and the prisoner, prayed, Hadad heard their quiet sobs. “Tremors went up my spine during those emotional moments in the prison wall,” Hadad says. “They were the most heartbreaking moments in my life and I began to cry like a small child.”

Hadad said that since he and the rabbi have taken the time to educate visitors about local law, what to be careful of and how to relate to locals, there has been then a fifty-percent drop in these kinds of issues.

“I have the greatest admiration, which I cannot describe in words, for all that the rabbi does here in Koh Samui,” says Hadad.

Goldshmid deflects the compliment. “Isn’t this what I am here for?” He says, pointing to Hadad’s generosity for always willing to give up his time to help another.

Together they hope to educate tourists even before they arrive to the country and further lower the risk of such problems.

Related Articles
View All
Yeshiva-in-Prison Brings Meaning, Spiritual Growth to Jewish Inmates
Gordon M., 36, is an inmate at a Virginia prison where he recently participated...
A First for Jewish Inmates in a Texas Prison: High Holy Days Plus Sukkot
While religious books are being purged from federal prison libraries, a Texas state prison hosted a prayer service, complete with two Chabad rabbis and a…
In Russia, Prison Attitudes Change to Accommodate Religious Practice
(lubavitch.com/LNS) Sergey K., whose last name is withheld for legal purposes, is a 48 year-old inmate serving a long sentence in a Russian penitentiary near…
Light Behind Bars
MIAMI, FL–For Kenneth N., the loneliness and despair of life behind bars has no parallel. “It was a denial of my essential humanity,” he says,…
Aleph Institute Lowers Recidivism Rate, Says Chief Justice
Decrying the high rate of recidivism among ex-offenders, Judge Joy Flowers Conti, speaking at the recent Pittsburgh Chaplains Conference, underscored the importance of community support…
Get Inspiration to your inbox!
Newsletter
Join our weekly newsletter for inspiration and updates
Donate
Find Your Local Chabad Center
Subscribe
|
Log In
Chabad
About Chabad-Lubavitch
About Chabad Lubavitch
The Rebbe
Headquarters
Magazine
Magazine
News
News & Updates
In The Media
Impact
Social and Humanitarian
Social and Humanitarian
Education
Education
Community
Community