Helicopters, Firetrucks, and Menorahs – Oh My! 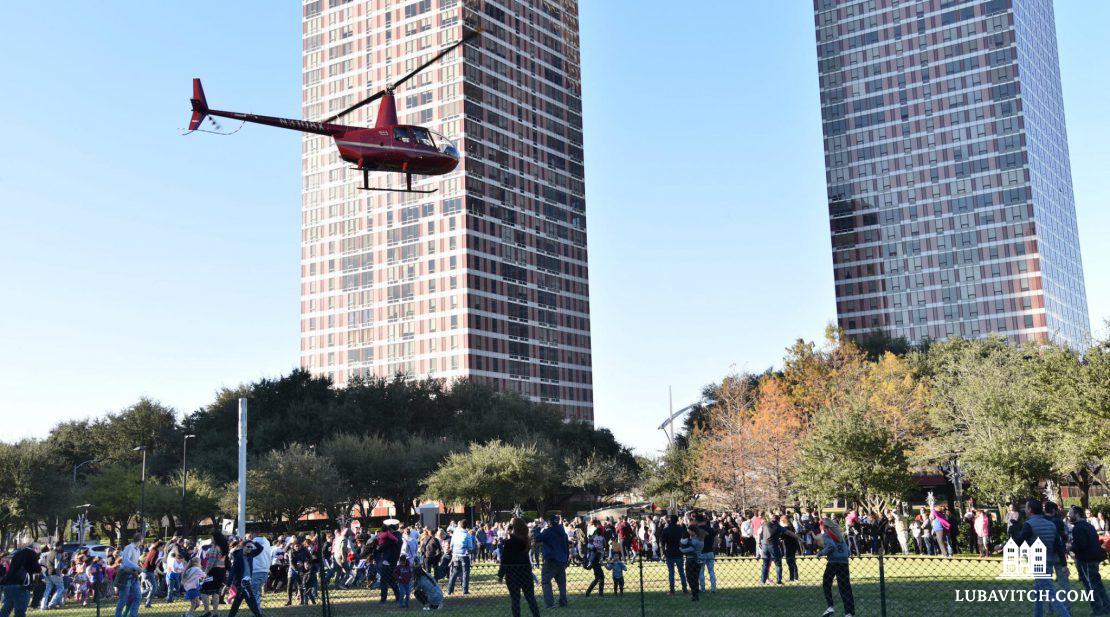 Like thousands of her fellow Chabad emissaries, Rebbetzin Sarah Barash holds a public Menorah Lighting event each year for her community in Jupiter, Florida. Alongside her husband Rabbi Berel Barash, she serves up latkes, doughnuts, music, and of course, the fanfare of lighting a giant menorah to publicize the miracle of Chanukah.

Always looking for innovative ways to make Chanukah events exciting and memorable for children, in 2012, she stumbled on the idea of raining bucket loads of chocolate “Chanukah Gelt” from a hovering helicopter. It happened when she heard of a little-known fundraising gimmick. “I don’t know how I ended up hearing about golf ball drops,” she laughs, “but something clicked.” She called up a helicopter rental company. After securing the necessary approvals, Chabad of Jupiter witnessed the first “Chanukah Gelt Drop.”

“Children love helicopters,” she says, describing the magic children report experiencing. “It’s exciting and noisy, the wind is blowing everywhere, and then chocolate starts falling from the sky!” The thrilled kids collected the coins into bags they had decorated themselves for the occasion.

It wasn’t long before other Chabad emissaries caught wind of the spectacle. Rebbetzin Chana Burston, a longtime friend of Mrs. Barash and director of Chabad of Orange County, New York, says she immediately saw the appeal. “I contacted the police and fire departments here,” she recalls, “but it became obvious that local restrictions ruled out using a helicopter.” But once she was talking to the Fire Department, they said they’d be delighted to help. Together they came up with the idea of a “Firetruck Gelt Drop,” a more practical way of making the same splash.

At Chabad of Orange County’s Menorah Lighting that year, Rebbitzen Burston and her husband Rabbi Pesach Burston gave Monroe Fire Chief Daniel Bennet the honor of lighting the menorah. The community looked on as a fireman clambered up a firetruck’s extended boom to shower the audience with thousands of chocolate coins. The children excitedly ran to scoop up the coins into fireman’s hats they had been given for this purpose.

Rabbi Burston found a certain symbolism in the fire chief’s participation. “A fireman’s job is to put out the negative kind of fires,” he said. “Here, we ignite a flame of positivity because the best way to fight negative fires is with one more positive flame.”

Over the years, the Gelt Drops in Orange County took on a life of their own. Rebbetzin Burston started mixing coins with gold colored wrappers amongst the thousands of silver-wrapped coins. She recalls seeing one young boy holding one of rare gold-wrapped chocolates he picked up from the drop, which entitled him to a prize. “This is the greatest moment of my life!” he exclaimed with a delighted grin.

As the years progressed, dozens of Chabad centers across the nation have mixed a Gelt Drop into their Chanukah programming. A small cottage industry has even sprung up manufacturing Gelt Drop specific products like chocolate dreidels and menorahs with miniature parachutes attached.

Raining chocolate coins from the sky is not only great fun for the children, but also presents  a powerful opportunity to educate them about the age-old custom of giving gelt on Chanukah. “The idea behind Chanukah gelt was originally to educate children about the importance of charity.” Mrs.  Burston tells me. Throughout the centuries, the Jewish poor often struggled to scrape together enough money to afford to light a menorah. The custom of giving gelt on Chanukah developed, in part, to share the light of the holiday with those who would otherwise not afford it.

Rebbetzin Barash tells me that the custom also signified a way to give children positive reinforcement for exemplary behavior, especially as a reward for charity. For her, making a magical spectacle that kids love serves the same purpose. “It creates powerful memories that get children excited about Chanukah each year.” She says. “I get calls months before Chanukah, excitedly asking ‘When is the Gelt Drop?!’”

Related Articles
View All
Chanukah
Chanukah Lights Go Up At Sunday Night Football
Millions Exposed to Holiday’s Message via the NFL
Chanukah
Kindling Faith With The Chanukah Lights
Do miracles get in the way of your faith? Do you find them an obstacle to making a deeper commitment to Judaism? Many people find…
Chanukah
Is This Chanukah Story Too Violent For Children?
“Chanah and Her Seven Sons” is a classic Chanukah tale. It is a story of faith, courage, and resilience. But is also a story of…
Chanukah
How To Chanukah
The Menorah On each of the eight nights of Chanukah, this year beginning November 28 through December 6, we light the menorah. Here, in a…
Get Inspiration to your inbox!
Newsletter
Join our weekly newsletter for inspiration and updates
Donate
Find Your Local Chabad Center
Subscribe
|
Log In
Chabad
About Chabad-Lubavitch
About Chabad Lubavitch
The Rebbe
Headquarters
Magazine
Magazine
News
News & Updates
In The Media
Impact
Social and Humanitarian
Social and Humanitarian
Education
Education
Community
Community