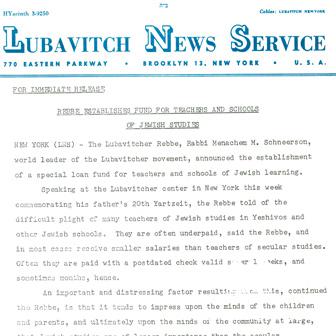 All News
New York
Jewish education is organic to Chabad-Lubavitch, and factors into all of its activities. In this week's flashback, we've uncovered an interesting press release by our news service, dated 1964, in which "the Rebbe called for an increase in salaries for teachers of Jewish studies so that they at least equal that paid for secular teaching," and established a loan fund to help schools better finance their payrolls.

REBBE ESTABLISHES FUND FOR TEACHERS AND SCHOOLS OF JEWISH STUDIES

NEW YORK (LNS) – The Lubavitcher Rebbe, Rabbi Menachem M. Schneerson,world leader of the Lubavitcher movement, announced the establishment of a special loan fund for teachers and schools of Jewish learning.

Speaking at the Lubavitcher center in New York this week commemorating his father's 20th Yartzeit, the Rebbe told of the difficult plight of many teachers of Jewish studies in Yeshivos and other Jewish schools. They are often underpaid, said the Rebbe, and in most cases receive smaller salaries than teachers of secular studies. Often they are paid with a postdated check valid several weeks, and sometimes months, hence.

Even Yeshivos, in many instances, will publicize and exalt those who excel in their secular studies and will take pride in having produced such able students, but they will not feel at all elated when attaining success in religious studies Another phenomena resulting, in part, from these implications, the Rebbe continued, is that secular institutions have many financial supporters, some of which contribute huge sums towards their advancement, whereas Jewish religious institutions have fewer supporters, and even in these cases, more assistance is rendered to the secular departments.

The Rebbe called for an increase in salaries for teachers of Jewish studies so that they at least equal that paid for secular teaching.

The Rebbe announced that he was establishing a loan fund where teachers receiving postdated checks would be able to redeem them immediately.

As an incentive for Jewish schools to expand their religious studies facilities the Rebbe said that the new fund would offer loans to such schools for such expansion.

The Rebbe noted that these loans would be administered on an equal basis for the benefit of Jewish studies departments of all Jewish schools, and would not be restricted to Lubavitcher or other institutions.

Years passed and then, quite unexpectedly, she received a check for the five thousand dollars in the mail. She felt that the best thing to do would be to give it the Rebbe's charity fund.

The Rebbe expressed his admiration for this gesture stating that he knew that the person was one of only moderate income, and that there were several young children in the family. These five thousand dollars, the Rebbe said, he would earmark towards the new fund. In honor of his father's 20th Yartzeit the fund would be called Keren Levi Yitzchak.

The Rebbe's father Rabbi Levi Yitzchak Schneerson gained renown at an early age as an outstanding Talmudic and Kabbalistic scholar, he was the Rabbi of Yekatrinislav, Russia, and was an active Jewish communal leader. He was instrumental in the defense and the ultimate exoneration of the historic Beilas blood libel case. Because of his activities in spreading Judaism he was deported by the communists to a prison in Alma Ata, in the province of Kazakstan, in central Asia. This brought his ill health and while in exile he passed away on the 20th of Av, twenty years ago. He left many Kabbalistic and Halachik manuscripts.

The Rebbe's mother who valiantly stood at her husband's side even during his prison confinement, now resides in New York.