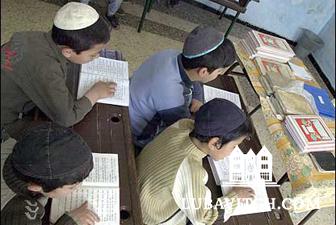 Tunisian children study at a Jewish school on the resort island of Djerba (Photo: AFP)

There's much that American Jews today take for granted, making the Jewish experience a comfortable and familiar one. It wasn't always this way.

In this feature, Lubavitch.com brings readers a look at some of the early press releases issued by Lubavitch News Service on behalf of the Lubavitcher Rebbe. Many of the press releases announce the launching of a new educational initiative or a mitzvah campaign that offer a glimpse into a different milieu, and help us appreciate just how far the Jewish American experience has progressed.

NEW YORK (LNS) – “If we really want to cultivate in our Jewish children the proper regard for the sanctity of the Divine Torah and its value as being ‘our very life and the length of our days,’ educators must cease teaching them from a mutilated Chumash (bible), one that has been ‘cut to size’ by an ‘educator’ who himself lacked the proper attitude and feeling toward the Torah and its Mitzvoth, or who was utterly misguided,” said the Lubavitcher Rebbe, Rabbi Menachem M. Schneerson, in a statement issued this week at Lubavitch world headquarters in New York.

In a strong appeal to Jewish educators at the approach of the new school term, the Rebbe in his statement criticized the use of the ‘Kitzur Chumash’ (abridged bible) in Jewish schools. “It is anachronous to use a Kitzur Chumash in teaching children in our day and age,” the statement says.

“It was introduced many years ago by individuals who rebelled against everything traditional in Jewish life who did not hesitate to use as extreme an encroachment upon Jewish tradition as the abridged Chumash constitutes. But that era is happily over and there is no longer a conscious attempt to undermine Jewish tradition.”

“Moreover,” the statement reads, “even the proponents of the Kitzur Chumash themselves did not envisage the terrible consequences of tampering with the Chumash, as it later became evident that children who were taught from the Kitzur Chumash and raised in that spirit lacked the authentic feeling for the sanctity of the Torah and Mitzvoth, not only for the so-called ‘light Mitzvoth’ but even toward the fulfillment of some of the basic and stringent Mitzvoth, and who in many many cases turned toward complete assimilation.”

“I need hardly add,” the Rebbe said, “that every minute detail in matters of education is of utmost importance, as the slight defect in a seed or seedling assumes enormous proportions when it grows into a tree. Children accept things at face value. Therefore, when a child, who knows that the Chumash is actually large and voluminous, is given in the classroom a Kitzur Chumash where entire sections of the Torah have been thrown out and various sections have been changed at the will and fancy of a human being, the child draws the obvious conclusion that the Chumash could not be Divine and inviolable, for otherwise no one would dare tamper with it.”

“Actual experience has shown that the vast majority of those who begin the study of Chumash out of a Kitzur do not attain the higher grades and background to study the Torah fully in its original form, and it is not on the basis of a few exceptions that one can build a proper educational theory. It is not an issue which has yet to be verified by experience,” the Rebbe’s statement continues, “for it already has a long and, unfortunately, a very sad history behind it, one which is irrefutable.”

“Common sense brings to the conclusion that if we really want to raise our children to lead a true Jewish life, the use of the Chumash in its complete and unadulterated form must be reinstituted in all Jewish schools,” the statement concludes.