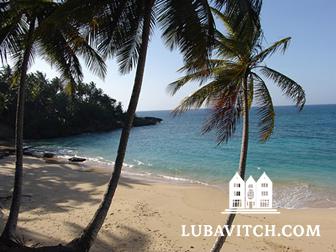 Jewish vacationers, travelers and tourists, will find their experience enhanced by unexpected encounters with Chabad. In far-out communities as well, where few Jews live without the benefit of a full Jewish community infrastructure, Chabad rabbis will spend time visiting, teaching and helping the locals establish certain much needed Jewish services. Often, these visits result in the decision to establish a full time Chabad presence.

The following is a news release issued by Lubavitch Headquarters in 1961.

Today, Chabad has installed full time representatives in the Caribbean Islands, where they have contributed to a Jewish infrastructure, including Shabbat services, kosher food availability, and more—for, accommodating both local and visiting Jews.

NEW YORK (LNS ) – A small Caribbean island* was the scene of a Jewish spiritual revival this week, as a result of a visit there by two young Rabbis on an educational tour,  part of a summer educational program sponsored by the Merkos L'Inyonei Chinuch, the Lubavitcher Central Organization for Jewish Education.

The two Rabbis, Shmuel Bogomilsky from Brooklyn, and Chaim Sweid from Buenos Aires, Argentina, arrived on the island by plane several days ago. Soon after arrival many Jewish residents disclosed to them that due to the lack of a Mohel in the entire region their children were never circumcised, but they still wish that they be circumcised and educated to live as Jews.

The young Rabbis cabled the Lubavitcher Rebbe, Rabbi Menachem M. Schneerson, whose Jewish welfare organization, Machne Israel, soon had a Mohel, and a Rabbi to supervise the procedure, on their way to the island.

Meanwhile word came from the island that the Torah scrolls there were no longer qualified for use, and that being that no Schochet ever lived there, there wasn't a morsel of kosher meat around, despite the fact that many Jewish families there would like to keep kosher homes. Within hours a Torah scroll and a shipment of kosher meat was dispatched, via plane, by the Machne Israel.

The two Rabbis had originally intended to stop on the island for a day or two, as a stepping stone on their way down to South America where they were to carry out their educational program, but it now seems that it will take at least two weeks for them to set up the "new" Jewish community on the island.

The Rebbe's office announced the receipt of a cable from the leader of the Jewish community on the island, wishing the Rebbe Mazel Tov for 18 circumcisions.

The trip of these two young men is part of a unique educational program introduced 13 years ago by the Merkos L'Inyonei Chinuch, which is headed by the Rebbe, which sponsors summer educational tours for senior Rabbinical students of the Lubavitcher Yeshiva in New York, who visit various Jewish communities throughout the Western Hemisphere as well as parts of Europe, in order to raise the standard of Jewish education in these communities.

*for obvious reasons the name of the island is withheld