Flashback 1950s: A Meeting With the Rebbe 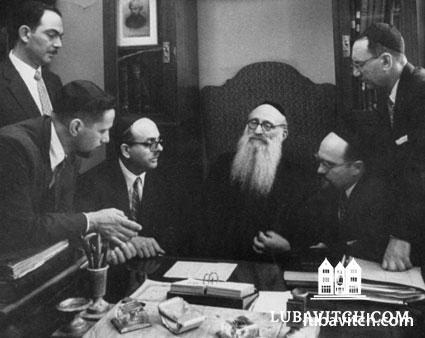 (lubavitch.com) Since the passing of the Lubavitcher Rebbe in 1994, a treasure trove of literature has been uncovered and continues to grow, illustrating the breadth and depth of his involvement and influence in Jewish life and Jewish leadership.

Few however, may know that this activist for Judaism and social justice who worked vigorously on numerous commissions on the state level to advance civil rights, fair housing and care for mentally retarded children, and led the first delegation of Rabbis to Communist Russia in 1956, had a rewarding association with the Rebbe.

Proud father of four, Rabbi Adelman died suddenly in 1966, at the early age of 50. But this prolific writer lived a remarkably accomplished life, and his eloquence continues to inspire those who remember him, and those who chance upon his writings.

10 Shvat, corresponding this year to Wednesday, February 4, recalls a transitional moment in the history of Chabad-Lubavitch when the reins of leadership passed from Rabbi Joseph I. Schneersohn, to his son-in-law, Rabbi Menachem Mendel.

Apropos this date, Lubavitch.com publishes a message by Rabbi Adelman (courtesy of his daughter, Mrs. Shulamith Adelman Schwartz) to his congregation, as it appeared in the B.M.H. Bulletin, dated September 20, 1960.

In the summer of 1956, after our return from the Soviet Union, I made a visit to Rabbi Menachem Mendel Schneirson, better known as the Lubavitcher Rabbi.

The purpose of my visit was more than idle curiosity. Somehow, as a result of what we had seen in Russia, I felt that I could find the answer to a most perplexing problem—how to captivate the hearts and hands of our people for God and His Torah—how to cause commitment to His Truth.

But why the Lubavitcher Rabbi? For this I will have to go back to our visit in the Soviet Union.

It would be trite to repeat the oft-heard story of spiritual decay in this hell-on-earth—where Satan rules and the god of materialism holds sway.

Yet it was in the midst of this modern Egypt and its forty-nine degrees of spiritual uncleanliness that my colleagues and I discovered the only meaningful resistance among our people. For, to our amazement, we found scattered groups of Lubavitcher Chassidim that had somehow managed, not only to survive, but to continue to find strength and to transmit it to their children.
Upon my return to America, I hastened to 770 Eastern Parkway in Brooklyn, expecting to find an imposing building as would befit this gigantic challenge to Russian Communism and the god of Moloch. I looked for severe security measures—secret chambers—and a hard dynamic leader of international movement.

I suppose that I was a little disappointed to find, instead, a ramshackle old building, badly in need of paint and repair, the lusty voices of young men hard at a folio of Talmud—and a soft spoken and gentle middle aged rabbi, who seemed hardly to be a match for the Kruschev I had met in Moscow.

But that was until I started to speak to Rabbi Schneirson and looked into his eyes.
Slowly, it began to dawn on me why we had met Lubavitcher Chassidim in Russia, even after they had been cut off from their source of strength for over thirty years. The former Lubavitcher Rabbi had been expelled in the mid-twenties—but more importantly, I began to see the answer to many questions that had been giving me no peace. For here I saw strength of a different kind—the strength of spirit.

The answer was obvious. To overcome material giganticism, one does not have to meet it on its own level. Synagogues need not be turned into a kind of religious night club or replica of Las Vegas to draw on the hearts of its people.

The simple answer to material giganticism is in being spiritually gigantic. No more—no less.

The power of truth is overwhelming—and its obvious asset is that it is Truth.
This is the great discovery that is beginning to turn American Jews back to the synagogue. We are beginning to realize, in the words of the Lubavitcher Rabbi:

“Far dem emes muzen alle fahlen!“
“Before the truth, all most prostrate themselves.”