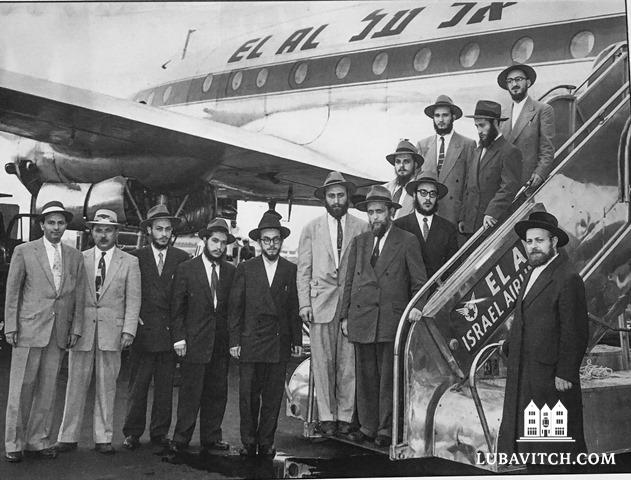 On a recent visit to Italy, I was reminded of the first time I traveled there. It was the summer of 1956.

I was a rabbinical student then, and traveling with me were nine of my fellow students. The Rebbe had sent us on a mission to bring moral support to the Jews of Israel, specifically to those living in Kfar Chabad, near Tel Aviv. Earlier that spring, fedayeen terrorists stole into a vocational school in the fledgling rural Chabad village and murdered five students and their teacher during their afternoon prayers.

The residents of Kfar Chabad were nearly all Holocaust survivors who were hoping to build their lives anew. This tragedy was too much for them to bear, and many thought of leaving for different places where they hoped they would be safer. But the Rebbe encouraged the residents to remain and continue building Kfar Chabad. In that process, he wrote to them, “you will find consolation.” And he sent us, ten senior rabbinic students from the central Chabad yeshiva in New York to spend four weeks with the residents, to live with them, to encourage and console them. It would prove to be a successful mission, for not one person left Kfar Chabad.

Our whirlwind itinerary called for a two-week detour, a visit to five countries—England, Belgium, France, Switzerland and Italy—on our way to Israel. At every stop we visited Jewish centers and leaders of major communities.

In Italy we visited the Jewish communities of Milan and Rome. Today, sixty years later, there are Chabad institutions in both cities, as well as in Florence, Venice, Trieste and Turin. The first shluchim appointed by the Rebbe to Italy were Rabbi and Rebbetzin Gershon Mendel and Basia Garelik. They settled in Milan in 1958. Later, in 1976, the Rebbe appointed Rabbi and Rebbetzin Yitzchak and Sarah Hazan to Rome.

In both cases these shluchim were newlyweds. As their families grew and more shluchim were recruited to Italy, the Jewish landscape matured. Local Jewish leaders I met with now confided that originally they were skeptical, if not resistant to Chabad, unsure that its services were needed in Italy. Today, they are enamored of the Rebbe’s shluchim, respectful and grateful for what they’ve done and continue to do to enrich and enhance Jewish life in their respective cities and communities.

This past June I visited the Ghetto area in Rome on Sunday morning. It was teeming with Jewish tourists. Near the crowded kosher restaurants and the magnificent Great Synagogue of Rome, men were waiting in line for their turn to bind tefillin with Chabad students. Rabbi Shalom Hazan gave us a tour of the local Jewish school where he is on the faculty. It counts more than 1,000 Jewish students. So much has changed for the better in Jewish Italy since my visit there sixty years ago.

In 1973, I received a call from the family of my personal friends, the world famous sculptor Jacques Lipchitz and his wife Yulla. They wanted to gift their villa, located in Camaiore, a small town in Tuscany, to Lubavitch. The property was dedicated for a summer camp: one month for girls and one month for boys, and for use during the year as needed.

Despite several visits to Italy in the intervening years, this would be my first opportunity to visit the site in Camaiore. The villa sits perched on a mountain top overlooking verdant rolling hills with vineyards and olive trees. Camp was in session with about 100 Jewish—mostly Italian—girls. I spoke to them briefly, telling them (through a translator) how fortunate they were to spend their summer enjoying an immersive experience of yiddishkeit in this magnificent setting.

As I spoke to them, I thought about the Rebbe’s lifelong investment in the education of Jewish children and the joy he would have if he could join us in Camaiore and see their happy faces. I told them that the Rebbe would surely encourage them to take what they’ve learned at camp and share it back home with their families and neighbors. He would speak to them of the women’s mitzvah of lighting Shabbat candles and its blessings of light and warmth. He would tell them that our future, the future of our people, depends on them.

Rabbi Yehuda Krinsky is Chairman of Merkos L’Inyonei Chinuch and Machne Israel, the educational and social services arms of the Lubavitch movement