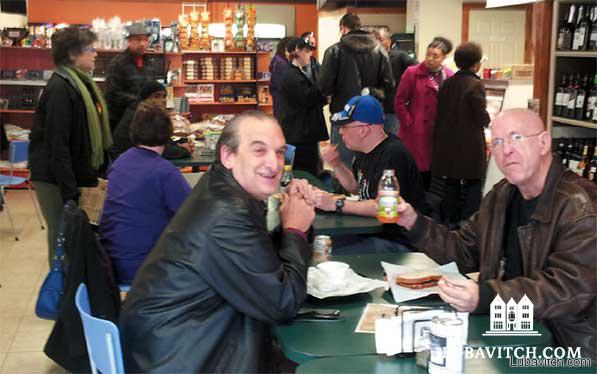 Enjoying a pastrami sandwich at the Maccabees Kosher Deli. Below: A study group at the eatery, a sandwich and Rabbi Jacobson helping a patron put on Tefillin.

I was with my dad when his cardiologist told him he’d have to follow a low sodium diet. Dad was concerned. Could he cheat at least once a month and have a corned beef sandwich and cup of that amazing chicken soup at his favorite deli, thick golden broth with carrots and matzo ball floating on top, he asked the doctor—with urgency. More than a good meal, he needed this fix to nurture something in his soul.

But dad’s deli of choice was kosher-style, as are so many these days. A true kosher deli is a rarity, especially outside of major Jewish nesting spots like New York, LA or Miami. At the height of the Great Depression there were more than 1,500 kosher delis in New York, according to Ted Merwin, author of Pastrami on Rye: An Overstuffed History of the Jewish Deli. They were a primary gathering place for the Jewish community, a place to schmooze and connect. They combined that ubiquitous American food, the sandwich, and pickled European meats, serving as a bridge between Jewish and American cultures.

Though the 21st century finds a dwindling number of Jewish delis, there is one that offers patrons a bridge in the other direction, back to their roots, their holidays, traditions and wisdom, once over easy, with a generous side of cole slaw.

Rabbi Yossi Jacobson, keeping pace with the needs of his community, has found a winning recipe: delicious eats, a warm and inviting atmosphere, spiced just right with an infusion of Jewish wisdom. And it’s not in New York, not even close: one would not expect to see this city among those on the 2014 list of Top Ten Kosher Delis: Des Moines, Iowa.

Des Moines, Iowa? Maccabee Glatt Kosher Deli, in the rolling plains of mid-America, stomping ground of presi-dential hopefuls, seems so out of place to most passers-by, it has lured many an unusual customer through its front door.

She recalls the one about the group of musicians who were passing through. They were headed to a café around the corner when they happened to see the sign for a glatt kosher deli. They had to come in and check it out. Tattooed, sport-ing long hair and leather jackets, some on motorcycles, they parked themselves at a table and Yossi got a schmooze going. Turns out two of them were Jewish. After their meal, they took Yossi up on his offer to wrap tefillin. For one, it was a first, for the other, the second time since his bar mitzvah.

How did the Yossi and Chani get into the restaurant business, where long intensive days are the rule?

“When we first came here, over twenty years ago, kosher was one of the observances that people were hanging on-to. We started a kosher food co-op to help them, providing meat and grocery supplies. One thing led to another, and the deli slowly developed. We never realized how big it would become,” Chani recalls.

Des Moines has a small Jewish community of about 3,000 Jews in a general population of 300-400, 000. But the deli is now a by-word in Des Moines and the surround-ing area. All kinds of people come from hours away to get brisket, gefilte fish, Passover supplies, and some warm inspiration. Someone might come in once every five years, because he just needs to have a kugel like Bubby’s.

“We are widely known as the best deli in town. Hundreds come in each week, and we’ve probably served 20-30,000 people by now. Our food is good, our place is sparkling clean, but what we really do is farbreng all day,” Rabbi Yossi offers.

“People come in hungry, and good kosher food brings everyone together. When they’re fed and feeling good, they often ask questions, sometimes questions they wouldn’t even ask their own rabbi. But all the town rabbis come in too. In this relaxed atmosphere, we can share a good word, a new idea. This is our way to strengthen our ties to each other and to Torah. It’s an oasis of yiddishkeit that brings everyone together. It feels like home.

Jews and non-Jews enjoy our food and feel the warmth. Many public officials and well-known figure come through, especially during election season. Being kosher doesn’t hurt. It has become a place where people unite and show tolerance for each other. Rick Perry came here; his campaign called us. We met the news crew that accompanied him. Some were Jewish and had never put on tefillin.”

All kinds of vehicles might grace the lot, including 15-wheelers. Joe, a trucker, frequents the place. “One day I was in the mood for a good pastrami sandwich and I figured I couldn’t go wrong visiting a kosher deli. When I walked in I was immediately greeted by Rabbi Jacobson with a hearty “Shalom!” Not being of Jewish background I responded back with a wave and a hello. Now we’re buddies. I love the food and philosophizing. The rabbi really cares and takes a minute to make a personal connection. I stop in most every time I’m passing through the city.”

Yossi lives by the maxim that “words from the heart enter the heart.” “We try to be there, with an open mind and heart, to sense what people need,” he says.

“A young couple came in recently. They thought they came for a meal, but I could see they really came in to talk. I went over and said, ‘Is everything ok? I see something’s troubling you, I’m a rabbi, in case you feel like talking.’ Their pain and tension was almost tangible.

“They bared their broken hearts and told me how they had lost a young child in a tragic accident only several months earlier. The tragedy was magnified because the father had buckled the child in her car seat incorrectly. The wife blamed him, and just couldn’t forgive him; could barely stand him.

What can I say when G-d sends us such a situation? I try to find an idea, a perspective from the Rebbe, to help the people reframe the situation in the midst of the terrible pain. At one point in our intense discussion, the man cried out with deep regret and anguish. It was a cry from the heart. His wife had not heard him express this before. She needed to hear his soul bared. When they walked out of the deli they were in a different space, united, accepting of each other and ready to start to move on, together. People leave with hope, more grounded in who they are. We do in-reach—we bring out the joy that’s within them. You never know what affect your words will have. Sometimes someone will say, ‘Oh, rabbi, I’m still living with what you told me five years ago.’ We try to share the Rebbe’s message of love and tolerance for everyone. “

Stuart Oxer, the Executive Director of the Jewish Federation of Des Moines, is a regular. “Yossi and Chani and their deli are a blessing for our community. For some the deli may be the only Jewish place they will go, but they’ll always be welcomed and made to feel comfortable.”

One community member thinks the place, where so much discussion and conversation takes place, should be re-named Hillel vs. Shammai Deli in honor of the great Talmudic debating partners.

What if someone just wants a sandwich, without all the interaction?

“Well,” Stuart says smilingly. “No one will bother you. But it’s pretty hard to get out of there in fifteen minutes. It’s not really just a meal. It’s an experience.”

Related Articles
View All
In Some Cities, Chabad House-Cum-Restaurant Draws People In
(lubavitch.com/LNS) Frantic financial types can unwind with café con leche and medialunes pastries while restoring their spirit with Jewish thought and prayer in downtown Buenos…
Tokyo, Japan, Gets Its First Kosher Restaurant
In a country where baba ghanoush, a Middle-Eastern favorite made of eggplant and mayonnaise or tahini is hard to come by, Chabad of Tokyo is…
Thawing Out in Winnipeg’s New Kosher Café
It is well below freezing outside, but inside BerMax Caffé + Bistro, patrons are sipping hot soup and lattes, enjoying a rare Winnipeg experience: kosher…
Popular St. Petersburg Restaurant Goes Kosher
Mikhail Mirilashvili of St. Petersburg sponsored the switch-over from non-kosher to strictly kosher, of the city’s popular 7:40 restaurant.According to the restaurant’s proprietor, Abram Israelashvili,…
Bloom’s Kosher Deli: Open On Shabbos . . . With Chabad
Bloom's famous kosher eatery is to London’s Jews what the 2nd Avenue Deli was to New York Jews. At its different locations, the popular eatery…
Chabad Center in Ho Chi Minh Moves to Larger Facility
Chabad's new, three-story, 3,800 square foot location stands on a busy street in District 1, the most populous section of the city.
Features
Remembering The Struggle for Russian Jewry
Ninety-three years ago today, Rabbi Joseph I. Schneersohn, sixth Lubavitcher Rebbe, was freed from Soviet-imposed exile.
Features
Wordsmith: Tamim
The tamim is unflappable. He does not sway with the winds of change, nor bend to meet the expectations of others. He is a simple…
Features
Remembering Rebbetzin Chana: Jewish Feminine Role Model
Rebbetzin Chana Schneerson, a feminine role model of Jewish activism and proponent of Jewish scholarship, mother of the Lubavitcher Rebbe and wife of Rabbi Levi…
Features
Defying Religious Stereotypes on Israel’s College Campuses
By the time Zehavit Mohager, a psychology student, began her studies at the University of Haifa at age 23, she had already completed her army…
Get Inspiration to your inbox!
Newsletter
Join our weekly newsletter for inspiration and updates
Donate
Find Your Local Chabad Center
Chabad
About Chabad-Lubavitch
About Chabad Lubavitch
The Rebbe
Headquarters
Magazine
Magazine
News
News & Updates
In The Media
Impact
Social and Humanitarian
Social and Humanitarian
Education
Education
Community
Community