In Some Cities, Chabad House-Cum-Restaurant Draws People In 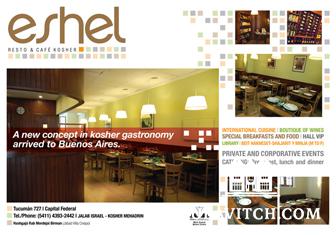 In Buenos Aires, Nice, Des Moines, and other cities, Chabad representatives are opening much needed kosher restaurants. But at the end of the day, these entrepreneurs factor in a spiritual component to their bottom line that gives soul food a whole new meaning. Part III in a Lubavitch.com series on the rise in kosher awareness.

(lubavitch.com/LNS) Frantic financial types can unwind with café con leche and medialunes pastries while restoring their spirit with Jewish thought and prayer in downtown Buenos Aires’s new and only kosher restaurant.

“We are like an oasis in the middle of the business district. Other restaurants in this area speed people in and out. Here it is another world,” said Rabbi Mordechai Jalusi who opened the restaurant in December.

Set among canyons of hi-rises and upscale retail stores, Eshel looks every bit a modern café. Sun streams in through its plate glass window. Its color palette is fresh. Piano music tinkles soothingly in the background, a Jewish video beams on a sleek flat screen in the front.

The early crowd files in when doors open at 8 am. Patrons of all types – Jewish and non-Jewish – sip coffee and flip through Eshel’s self-published magazine. Glossy and well designed, the magazine contains articles on Judaism and professional life. An article on finding spirituality in the cutthroat business world seems to be getting a close reading by several diners.

Opening Eshel cafe has been Rabbi Jalusi’s dream since he started his Chabad center downtown five and half years ago. He feels a special kinship with pressured businesspeople because he was one himself.  An entrepreneur with a successful business, then 31-year-old Rabbi Jalusi followed his brother to an all night Torah study session on the holiday of Shavuout.

“If the Jewish people were able to accept the Torah and say ‘we will do it and we will learn it,’” he recalled, “then I should too. Am I not one small part of those very same Jewish people?”

By age 40, Rabbi Jalusi became a full time student in yeshiva. Back in Buenos Aires, he found himself wishing for more opportunities to teach and convinced Rabbi Tzvi Grunblatt, senior Chabad representative to Argentina, to let him start a Chabad center downtown. Drawing a growing crowd to services and classes, Rabbi Jalusi laid the groundwork was laid for Eshel’s grand opening.

Chabad in Nice, France, doesn’t claim to have originated the trend, but their 20 years in business demonstrate that when Jews come to eat, they’re hungry for more than pizza.  LeChem Chamaym serves up sushi, pizza, pasta to a crowd of lunch and dinner regulars with a courtyard that adjoins Chabad’s offices.

As amiable Avi Nidam, the heart and soul of the restaurant, shmoozes with diners he tells them about Chabad’s upcoming activities. He has a reputation as a good listener and a proactive booster of Jewish education. “Ten children signed up for school this year because of the restaurant,” said Chabad of Nice’s representative Shterna Sara Pinson. Proximity to the Chabad center helps. One mother who had long objected to day school education changed her mind and Nidam called Mrs. Pinson. She left a pot of soup boiling on her home stove to bring registration papers to the restaurant and conducted an interview as the dinner dishes were cleared.

Young Jewish children are few in number in Glasgow, Scotland. The country’s Jewish population stands at 5,500, with many seniors and a few Israeli imports. When Rabbi Chaim and Sora Jacobs opened L’Chaim’s Gourmet Kosher Restaurant four months ago, they had adult palates in mind. Their traditional Jewish menu with salt beef, known in the US as corned beef, and latkes draws out diners nostalgic for the foods their mothers served.

“Rather than going out and knocking on people’s doors, the restaurant gives people an opportunity to come to us,” said Rabbi Jacobs. “We see people who would otherwise not come.”

Breaking bread in the restaurant does not have to be a religious experience, but eating kosher comfort food with a Mrs. Jacobs minding the front of the house has a ripple effect. One L’Chaim’s guest emailed his compliments to the Jacobs after a fine meal and closed with a request for the rabbi to call. Though he avoided Chabad’s overtures in the past, the restaurant meal broke the ice.

L’Chaim Restaurant is also warming up Jewish tourists to visiting Glasgow. Golfers, whiskey aficionados, doctors and touring groups have booked spots at the restaurant and to-go meals during their stay. On January 25, the birthday of Scottish poet Robert Burns, L’Chaim served up a Burns Night supper, minus the haggis.

“It’s a night everyone goes out, and the restaurant lets them enjoy the secular cultural event in a kosher setting,” said Rabbi Jacobs.

The very first mix of spice and spirit goes all the way back to Abraham, forefather of the Jewish people. That Abraham offered weary desert travelers hospitality and taught them about monotheism is alluded to in Genesis (21:33) with the word “Eshel.”

In Nice, Glasgow and Buenos Aires, the tradition of Eshel continues with fresh pasta, coffee and a kind word, an island of calm in a chaotic world.

Related Articles
View All
As Kosher Awareness Grows, More Make the Switch Even When Eating Out
(Lubavitch.com/LNS) When Leslie Paskoff of Minnetonka, Minnesota, recently invited some friends to her kitchen table, it was a “going kosher” party. Guests peeled stickers off…
Good for the Palate, Good for the Soul: Kosher Cuisine Grows Up
(lubavitch.com/LNS) “I came to Iowa to campaign for Barak Obama, and ended up putting on tefillin for the first time.” Rabbi Yossi Jacobson recounts this…
Get Inspiration to your inbox!
Newsletter
Join our weekly newsletter for inspiration and updates
Donate
Find Your Local Chabad Center
Subscribe
|
Log In
Chabad
About Chabad-Lubavitch
About Chabad Lubavitch
The Rebbe
Headquarters
Magazine
Magazine
News
News & Updates
In The Media
Impact
Social and Humanitarian
Social and Humanitarian
Education
Education
Community
Community