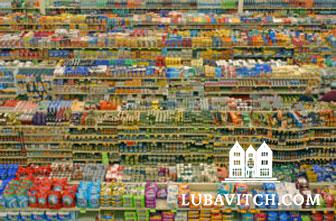 Twenty five years ago, kosher staples on supermarket shelves were boring and basic. Keeping kosher meant few choices for take-out, fewer still for eating out. It's a whole different world out there for kosher consumers today. In this two-part series, Lubavitch.com looks at the dramatic change in attitude that has made kosher consumption popular with an upscale, discriminating market.

(lubavitch.com/LNS) “I came to Iowa to campaign for Barak Obama, and ended up putting on tefillin for the first time.”

Rabbi Yossi Jacobson recounts this Obama staffer’s experience at Maccabee’s Deli, his Chabad House in Des Moines, Iowa. The specialty at this kosher deli is corned beef on New York Rye, but customers have a choice of sides, ranging from Kiddush cups, kosher cookbooks, and yes, tefillin.

Between bites of a pastrami sandwich, Rabbi Jacobson’s customers listen to timely words of Torah, ask advice, and do mitzvot. The sparks of holiness in kosher food, he says, are powerful enough to purify the soul and open it to further holy experiences. Over his six years in business, Rabbi Jacobson has noted a correlation between his customers’ spirituality and their growing interest in kosher meat.
Menachem Lubinsky, CEO of Lubicom Marketing Consulting and editor-in-chief of KosherToday.com, agrees that demand for kosher is rising. A recent study from a leading food and beverage research firm, Mintel, found that the most common food label this past year was the kosher label.

The last 12 months saw new kosher certification on 3,984 food products and 728 beverages. More than half of all American supermarkets have significant kosher sections showcasing these new items. Mr. Lubinsky says that for many Jewish consumers, kosher is now a trendy way to connect to their heritage.

In such an environment, he asserts, “Chabad has had an enormous impact.”

Lubinsky credits the Lubavitch movement with opening up supermarkets to kosher because of their influential presence in far-flung locales. In some cases the impact can stem from a single Chabad family. The communities they build, comprised of people taking on new mitzvot, need convenient kosher food. Supermarket chains, with their eye on the bottom line, are taking note.

Many shluchim, as part of the process of koshering people’s homes, take congregants for a dry-run through grocery stores. This helps them identify kosher products and understand the different symbols. Shluchim also host public events such as the popular Kosher Week, in which they are available for questions and assistance at local shops.

Several of the shluchim’s programs and classes receive funding from the OK certifying agency, with its main offices in Crown Heights, New York. Rabbi Chaim Fogelman is Director of Public Relations and Education for the OK which certifies 300,000 foods in 60 countries: 98 percent of all kosher products contain ingredients certified by the OK.

According to Rabbi Fogelman, today’s technologies and global economy make it relatively simple for companies to become kosher. The high demand for kosher products is forcing businesses to expand and improve their offerings.

“Without the shluchim,” opines Fogelman, “there would be no kosher.” All of the agencies utilize the services of the dedicated Chabad representatives, who are often the ones to rise at two in the morning for a shift. These knowledgeable rabbis are available globally, providing a vital link from the certifying agencies’ corporate headquarters to the individual plants.

Rabbi Don Yoel Levy, President of the OK, explains that the need for so many kosher goods is because “the Rebbe provided consumers.”

In 1975, the Rebbe’s 10-point mitzvah campaign focused heavily on kosher awareness. At the time, many former hippies from the 1960s were hesitant to rid themselves of their natural, sometimes vegetarian, eating habits. Chabad was quick to reassure them that those guidelines were synonymous with a kosher diet.

A decade later, shluchim were interacting with a more professional crowd. These people were upscale, enjoying an eclectic style of food such as Thai, Italian, and Indian. Chabad taught that other cuisines can be adapted to a kosher lifestyle, with minimal changes. Nowadays people are thrilled to dine with their local Chabad representative, sipping quality merlots and cabernets, as opposed to sickly sweet Kiddush wine of yesteryear.

Many of these same baalei teshuvah (“returnees”) have either opened or inspired the nearly 1,500 kosher food establishments in the United States today. The scene that met early shluchim around the country was a far cry from the current wealth of restaurants. Then, commercial kosher cuisine consisted of a few eateries that offered either smoked meats and herring or blintzes and sour cream. Now many religious professionals can proudly host their non-Jewish colleagues, and many shluchim can meet with congregants at prestigious kosher restaurants.

Well before it was chic, Chabad was fusing Jewish tradition with ethnic fare. From gefilte fish served alongside sushi to Mexican-themed Purim parties, Chabad’s unbiased gastronomy highlights its general philosophy of utilizing the physical for spiritual means. Whether the program is centered on a restaurant, a popular Friday night meal on campus, or playing host to hungry senior citizens, kosher food becomes is an effective conduit to people, and to matters of the soul. Sometimes it is a kosher snack that leads a person on the path of observance; alternatively, growth in different areas will lead someone to take on the mitzvah of kashrut.

From behind his deli counter in Des Moines, Rabbi Jacobson agrees. He finds that the deli provides an unthreatening setting for people to learn and grow more.

One Jewish man, who had left his native New York 30 years earlier to marry a non-Jewish Midwesterner, entered Maccabee’s one day. When he saw the jar of Batampte pickles in the refrigerator, he leaned forward to retrieve them. Sobbing, “Bubby, Zaidy,” he recalled his traditional childhood and his religious grandparents.

While tangy pickles may not pave every road to Judaism, the numbers indicate that one sure way to a Jewish heart is through the stomach.

Related Articles
View All
Kosher Cooking Bible Turns Thirty, Inspires Lifestyle Changes
(Lubavitch.com) Thirty years since it was first served up, Lubavitch women’s kosher cookbook has sold 160,000 copies worldwide. That’s no small potatoes. But it's for affecting…
Features
Remembering Rebbetzin Chana: Jewish Feminine Role Model
A feminine role model of Jewish activism and proponent of Jewish scholarship, is being remembered today, on her yahrzeit.
Features
Holy Folly: Using Humor to Reach for G-d
How humor can make room for a deeper truth otherwise concealed by the apparitions of this world
Features
After The Collapse
At the site of the collapse, they clamored for something, some remains of their loved one.
Features
Tradition, Tradition!
Is Judaism too ritualistic?
Get Inspiration to your inbox!
Newsletter
Join our weekly newsletter for inspiration and updates
Donate
Find Your Local Chabad Center
Subscribe
|
Log In
Chabad
About Chabad-Lubavitch
About Chabad Lubavitch
The Rebbe
Headquarters
Magazine
Magazine
News
News & Updates
In The Media
Impact
Social and Humanitarian
Social and Humanitarian
Education
Education
Community
Community