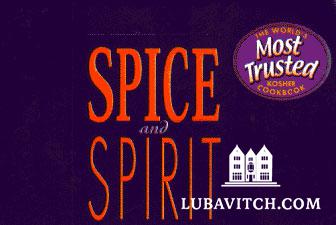 (Lubavitch.com) Thirty years since it was first served up, Lubavitch women’s kosher cookbook has sold 160,000 copies worldwide. That’s no small potatoes. But it's for affecting lifestyles beyond the kitchen that sets The Spice and Spirit Cookbook apart on the culinary bookshelves.

Apricot chicken, on page 240, steaming and savory, is on the dinner menu at the West Haven, CT, home of Elaine Davis, a high school health teacher. Never a big cook, Davis and her family have been eating in more since turning kosher with the help of nearby Chabad of Branford.

“The book reinforced things I learned, and provided information and explanations about things I didn’t know,” Davis told Lubavitch.com.  She checked out the sections about keeping kosher, planning a kosher kitchen and the holidays that sandwich the book’s 800 recipes. “It is very, very helpful.”

Esther Blau isn’t surprised to hear Davis’s story. People approach her all the time, thanking her for helping them slice through to the core of Jewish observance. Blau speculates that part of the cookbook’s success as a teaching tool is its approachability. It’s just more fun to flip through a cookbook than to slog through a legal text.

Knowing it would be browsed by readers more interested in the “spice” than the “spirit”, the non-recipe sections were kept succinct, informative and, above all, accurate. Two rabbinical authorities reviewed galleys before the book went to print. “It is the Lubavitch way. Our goal is to teach,” Blau said.

As a culinary guide, Spice and Spirit holds its own. Jan Longone, curator of American culinary history at the Clements Library at the University of Michigan in Ann Arbor, said, “If someone called and asked which book to use for Jewish cooking, I recommend [Spice and Spirit] and one of Joan Nathan’s books.” Longone has donated her copy to the Clements library that holds cookbooks that date back to the Renaissance. Recipes from Spice and Spirit were included in the New York Times Cookbook and in a book by Joan Nathan, host of PBS’s Jewish Cooking in America.
Instructions from the “purple cookbook,” as it is affectionately known because of its strikingly modern, yet Concord grape colored cover, help Miryam Piekarski of Chabad of Hamden, CT. On nights that her popular Kosher Culinary Club kneads challah dough, she offers how-to’s on the mitzvah of separating a portion of challah based on to the cookbook’s step-by-step directions.

Novice cooks, customers at Jumbo Judaica in Houston, TX, receive a tour of the book from Shoshana Traxler of Chabad of Houston before they take it home. “It has so many things in it, the blessings for food, an explanation of pareve [neutral foods], how to set up a kosher kitchen,” said Traxler. “There are a lot of kosher cookbooks out there, but when new people come in and want to learn about kosher, I direct them right away to this cookbook. It is indispensable.”

After being updated in 1990, the book received a tip of the toque from the Mc Ilhenny Culinary Foundation, which was started by the owners of the Tabasco sauce company. Longone remembers when it was nominated. She voted for it to win the Tabasco Community Cookbook Award, so did Nachum Waxman of New York City’s landmark Kitchen Arts and Letters. “Everyone liked that book. It was so well done. It gave you excellent history” of the foods and the practices that surrounded them.

Owners of an oft consulted copy, batter-scarred and gravy stained to be sure, would be surprised to learn that the 475-page whopper was envisioned as a slim, spiral bound community cookbook. In the seventies, Editors Esther Blau, Cyrel Deitsch and Cherna Light saw more and more newcomers moving into their Brooklyn neighborhood who were new to kosher, new to Sabbath observance, new to all the food ways of Judaism. They set off to write a simple cookbook until they sought the advice of the Lubavitcher Rebbe, of righteous memory.

“The Rebbe said we should produce a cookbook that was hardcover, that could compete with any other cookbook out there,” said Blau.

Creating its highly readable layout fell to Avrohom Weg, now president of 20/20 Digital Design in Brooklyn. Weg raided his mother’s cookbook collection to gain familiarity with the best of the genre. “I relied on my mother to tell me what was important in a cookbook,” he said.

Requests for an updated edition continue to pour in, say the cookbook’s original editors. Weg said it would be quite a project. Designing the book back in the eighties was a pre-PC affair. Every recipe was typeset, cut and pasted to the layout boards with wax. Every bit of the book would have to be digitized before an update could be attempted. New recipes would have to undergo rigorous testing.  The last version took six years to produce.

Not for nothing has the Spice and Spirit earned its tagline, “The World’s Most Trusted Kosher Cookbook.”

The Cookbook is available through the Lubavitch publication house at: kehot.com.