As Kosher Awareness Grows, More Make the Switch Even When Eating Out 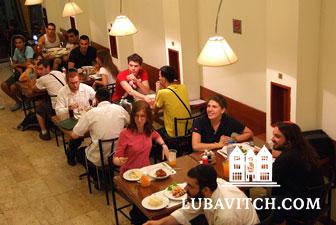 Even in Bangkok, eating kosher when eating out. (photo: lubavitch.com/LNS)

With the explosion of kosher food products today, kosher consumption no longer means a narrow culinary experience. Still, becoming strictly kosher comes with a set of challenges, mostly social ones that require a leap into a more thoughtful kind of lifestyle, where people will think carefully and do some research before planning a vacation, or accepting invitations. The following is Part II in a Lubavitch.com series on Kosher consumption.

(Lubavitch.com/LNS) When Leslie Paskoff of Minnetonka, Minnesota, recently invited some friends to her kitchen table, it was a “going kosher” party. Guests peeled stickers off of new kitchen tools, and helped organize kitchen cabinets, separating dairy and meat utensils. Dr. Paskoff tried to avoid the Rabbi’s blowtorch and keep his cool.

Two weeks later, Dr. Paskoff  “feels very good about it.” His strictly kosher home was a work in progress for over a year, as he and his wife debated the merits and complications of going kosher. The Paskoffs were first attracted to the idea after joining their local Chabad Shul run by Rabbi and Mrs. Mordechai Grossbaum. They were touched, they say, “by the warmth of the Chabad philosophy,” and slowly grew in their observance. The family attends shul and classes regularly and has become more Shabbat observant.

The next step, they felt, was going kosher.

The Paskoffs are representative of a continuing trend that started with Chabad’s kosher awareness drive launched by the Rebbe back in 1975. Ever since, Chabad Shluchim focus much of their outreach on the education and practice of kashrut, generating interest and consumption of kosher food.

The big surprises that come with keeping a kosher kitchen, says Dr. Paskoff, are the little details that crop up: a hechsher, kosher certification, is needed even on soap (Brillo, they learned along the way, is not kosher). He is excited to raise his children with something he didn’t have growing up, even when things get hairy. And even though he won’t admit it, says Dr. Paskoff, his 80-year old father who grew up religious but left it years ago, is secretly pleased.
With a kosher store in close proximity, and his rabbi merely a phone call away, Dr. Paskoff feels confident that he and his family will be able to keep all the laws of kashrut.

Rabbi Aaron Margolin, a shliach in Norfolk, Virginia, remembers another era when the paucity of kosher food products coupled with ignorance made things much more difficult. In 1979, he and his wife moved to Norfolk, a place where few people were keeping proper kosher homes. At that time a many “kosher” households were mixing kosher meat with kosher cheese. Others thought kosher food was food that was blessed by a rabbi.

“Telling people about proper kashrut was like telling them to go to the moon,” he laughs. Since then, Rabbi Margolin has helped many families make the switch and further serves them by supervising the production of food products.

Often the first point of conflict between a newly-religious individual and his family is the awkwardness of not being able to break bread together at a previously-visited restaurant or relative’s home. Many new to kosher will keep a kosher home, but may take time before make the switch when eating out. While kosher restaurants continue to grow, with an abundance of diverse ethnic eateries and upscale restaurants in areas with sizable Jewish communities, that’s not the case everywhere, and individuals who choose to go strictly kosher will consciously make the decision to give up the convenience of eating anywhere: at a drive-thru, on vacation, or with colleagues at a meeting.

There is also the fear factor.

Arlene Berenson moved to an orthodox neighborhood a few years ago. She and her husband, Richard, have enjoyed being part of the Lubavitch community of S. Paul, Minnesota, attending services, classes, and Shabbat meals with friends. Their commitment is growing and they have recently been considering koshering their home. While Ms. Berenson thinks it will be easy to keep meat and dairy separate, she is afraid of messing things up and having to re-kosher or re-buy.

To allay such worries, Chabad representatives walk community members through every step along the way to becoming fully kosher. It often begins with a trip to the local supermarket where they’ll teach them to identify kosher products and the different kosher symbols. Rabbi Zalman Goldstein, author of the newly-released Going Kosher in 30 Days, says this is crucial. The book, available at Kehot Publication Society, has sold thousands of copies since it was printed four months ago and has already helped eight families kosher their homes.

Learning about the availability of kosher food items—and there thousands with a growing selection that has seen 3,984 food products added to the variety in the last 12 months alone—and a combination of national affluence and less expensive technology, says Rabbi Goldstein, has helped. Microwaves can be purchased for 30 dollars, not three hundred. The kosher markup is currently only five to ten percent, meaning that consumers do not need to break the bank in order to keep this commandment.

An abundance of resources available online and in the bookstores make it easy today for anyone to explore kosher. Chabad Shluchim will help those wanting make the switch turn their kitchen kosher and teach them all the ins and outs. For people who don’t have a local rabbi to help them, there is always Rabbi Sholtiel Lebovic, director of GoKosher. Together with his crew, he koshers over 1,500 homes in the New York area annually. Much of his work is done in conjunction with the kosher campaign the Rebbe founded.

Food As A Spiritual Tool

Mrs. Leah Klein is co-director of Chabad’s kosher campaign based in New York.

“Food has a potent energy to sustain the soul,” she says, explaining the spiritual merits of keeping kosher. Her ideas on kosher are informed by the Chasidic view, which, she says, sees food as not merely a means to physical satiation, but an important aspect in a Jew’s spiritual makeup.

A kosher diet helps refine the individual’s spiritual sensitivity, and make them more receptive to matters of holiness. It is also illustrative of the Chasidic concept that challenges the individual to elevate all physical matter: through preparing kosher meals, one redeems the G-dly spark inherent in the food itself.

More than prayer, kosher food allows the individual a tangible expression of his rediscovered connection with G-d.

Related Articles
View All
Good for the Palate, Good for the Soul: Kosher Cuisine Grows Up
(lubavitch.com/LNS) “I came to Iowa to campaign for Barak Obama, and ended up putting on tefillin for the first time.” Rabbi Yossi Jacobson recounts this…
Features
Wordsmith: Chasid
As is true of every close-knit cultural group that enjoys a history, traditions and habits particular and peculiar to it, conversations among Chabad Chasidim are…
Features
Remembering The Struggle for Russian Jewry
Ninety-three years ago today, Rabbi Joseph I. Schneersohn, sixth Lubavitcher Rebbe, was freed from Soviet-imposed exile.
Features
Wordsmith: Tamim
The tamim is unflappable. He does not sway with the winds of change, nor bend to meet the expectations of others. He is a simple…
Features
Remembering Rebbetzin Chana: Jewish Feminine Role Model
Rebbetzin Chana Schneerson, a feminine role model of Jewish activism and proponent of Jewish scholarship, mother of the Lubavitcher Rebbe and wife of Rabbi Levi…
Get Inspiration to your inbox!
Newsletter
Join our weekly newsletter for inspiration and updates
Donate
Find Your Local Chabad Center
Chabad
About Chabad-Lubavitch
About Chabad Lubavitch
The Rebbe
Headquarters
Magazine
Magazine
News
News & Updates
In The Media
Impact
Social and Humanitarian
Social and Humanitarian
Education
Education
Community
Community