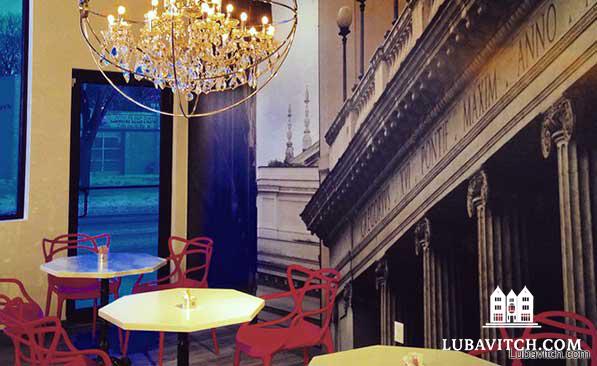 The interior of the BerMax Caffé + Bistro. Below: Maxim Berent.

It is well below freezing outside, but inside BerMax Caffé + Bistro, patrons are sipping hot soup and lattes, enjoying a rare Winnipeg experience: kosher dining in a smart, upscale eatery.

The opening last month of the city’s only gourmet kosher restaurant—a dream come true for Maxim Berent and his mom Oxana—is quickly becoming a game changer for the city’s Jewish community.

Reflecting their passion for Italian coffee, cuisine and design in a kosher setting, the new café will break a pattern of failed kosher eateries in this northern Canadian hinterland. Businesspeople, Jewish residents and local teenagers now have an attractive alternative for kosher eating and meeting in their own neck of the woods.

BerMax Design, Berent’s family business, is a leading designer and manufacturer of custom kitchens and doors. When he planned to open a showroom in North Winnipeg, Maxim had the idea for a small coffee shop where clients can meet to discuss design plans over house-made crepes and pastas.

While attending the International Conference of Chabad Lubavitch Emissaries in 2013, Maxim visited some kosher establishments in New York and decided his café would be kosher.

“The restaurant,” he says, “is an outcome of our involvement with Chabad,” which, offers Rabbi Shmuel Altein, director of the local Chabad’s Jewish Learning Institute, goes back years and has been mutually rewarding to the Jewish community and Maxim.

Opening a kosher restaurant may not seem like “a prudent business move,” wrote Bernie Bellan in Winnipeg’s Jewish Post and News, after the January opening. But the new establishment will prove that “when done right,” a kosher restaurant can find its niche.

Located in River Heights and across from the Tuxedo neighborhoods where most of the city’s 13,000 Jews reside, the restaurant has fast become popular with Jewish and non-Jewish patrons. It is also attractive to local Jewish teens and young adults who did not have a kosher hangout until now.

“They come in and they love the place. It offers is a Jewish environment, and this in itself is exciting for us,” says the proprietor, hinting that if all goes well, there’s always room for another place.

Related Articles
View All
Tokyo, Japan, Gets Its First Kosher Restaurant
In a country where baba ghanoush, a Middle-Eastern favorite made of eggplant and mayonnaise or tahini is hard to come by, Chabad of Tokyo is…
Popular Deep-Dish Pizza Chain to Open Kosher Branch
Gino’s East, a Chicago-based restaurant chain famous for its deep-dish pizza will soon have a kosher branch in The Living Room, a space under construction…
Got A Kosher Dog?
Can I have a kosher hotdog? If this is what stands in the way of Jewish families who would entertain switching to a kosher diet,…
In Sao Paulo, Thousands Line Up for a Kosher Big Mac
(lubavitch.com) They flipped 10,000 burgers at the local McDonald’s last Sunday, and Ronald McDonald was doing his usual thing. But this time, he was greeting…
Kosher Food Online In Moscow
(fjc.ru) Moscow’s renowned Kosher Market.ru food store has launched an exciting new project that is certain to be a big hit with local Jews and…
Boutique Dairy Farm in Germany Goes Kosher
Germany’s kosher consumers can now enjoy a full line of locally produced boutique cheeses and milk that come from a small dairy farm near the…
Get Inspiration to your inbox!
Newsletter
Join our weekly newsletter for inspiration and updates
Donate
Find Your Local Chabad Center
Chabad
About Chabad-Lubavitch
About Chabad Lubavitch
The Rebbe
Headquarters
Magazine
Magazine
News
News & Updates
In The Media
Impact
Social and Humanitarian
Social and Humanitarian
Education
Education
Community
Community