In Sao Paulo, Thousands Line Up for a Kosher Big Mac 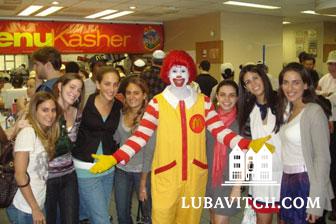 (lubavitch.com) They flipped 10,000 burgers at the local McDonald’s last Sunday, and Ronald McDonald was doing his usual thing. But this time, he was greeting kids in yarmulkas, and the beef was glatt kosher. No cheese.

In fact, the entire restaurant in S. Paulo’s Barra Funda neighborhood was strictly kosher for the day. 5,000 patrons curious to experience McDonald’s at its kosher best lined up for their own kosher big mac.

Following last year’s successful debut, organizers were inspired to repeat and enlarge on the local fast food franchise going kosher-for-a-day. The idea, hatched by a local Chabad-Lubavitch teacher determined to advance kosher awareness, would expose a good percent of Brazil’s 60,000 Jews to kosher awareness, especially with the massive advertising campaign sponsored by Jewish businesses in Brazil.

It took a team of rabbis and weeks of arranging for the 14-hour switch to kosher, with every ingredient from bread to spices, sauces and fries carefully selected from kosher sources. Saturday night, rabbinical supervisors koshered the entire kitchen.

Lines formed at McDonald’s even before opening time at 9 a.m. Many patrons were clearly kosher consumers who waited patiently in line as much for the kosher quarter pounder as for supporting the initiative. But many others new to kosher also got in line for a kosher McDonald’s burger, curious for the experience.

“There’s no doubt that this initiative is highly effective in raising awareness of kosher observance in this country,” said S. Paulo’s Chabad Rabbi Shammai Ende.