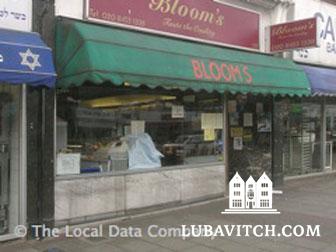 Bloom's famous kosher eatery is to London’s Jews what the 2nd Avenue Deli was to New York Jews. At its different locations, the popular eatery served up some of its favorites like “plump, firm, matzo balls” and salt beef to famous diners, including Charlie Chaplin (a close friend of the owner) and Frank Sinatra (who reportedly ordered takeout to his suite at the Savoy, and never returned the silver dishes).

Dinner will begin with Kiddush and Challah, and will include the full menu of a respectable Shabbos table, in a warm and spirited ambience.

The idea, says Rabbi Sudak, Chabad’s representative to Edgware since 1986, came in answer to a conundrum: while guests loved visiting the Sudaks home, they were uncomfortable coming regularly, as they could not reciprocate the invitation.

A friend suggested that the Sudaks host a traditional Friday night dinner at a local restaurant. Consensus was that if diners could pay their own way, they would come time and time again.

Rabbi Sudak turned to an old family friend and the owner of Bloom's, Mrs. Kitty Rudolph, with the idea.

Originally located in London’s Brick Lane, Bloom’s was started by a Lithuanian immigrant named Morris Bloom. When he opened the restaurant in 1920, the neighborhood was home to a large Jewish population. As that population migrated to different London areas, the restaurant followed, but its reputation continued to draw notables, including Britain’s Prime Minister Tony Blair and actor Dustin Hoffman.

Today Bloom's, “Britain’s most famous kosher restaurant,” is located in the thriving Jewish community of Golders Green, and more recently, in Edgware. With a population that is 47 percent Jewish and 12 synagogues for residents choose from, this suburb north of London at the end of the Underground’s Northern Line, is a vibrant Jewish hub.

“When Rabbi Sudak approached us,” explains Mrs. Rudolph, “we couldn’t possibly refuse him. We know he does everything he can to help the community and we felt we ought to do the same.”

So for the special rate of 25 pounds—paid for before Shabbos—customers will enjoy a full Shabbos dinner and more: traditional Shabbos melodies, discussions on the weekly Torah portion, and a lively, family Shabbos table experience.

“It will be good for these people to have a proper Shabbat dinner,” says Mrs. Rudolph.

Registration for Friday night’s dinner is limited to 45 participants. The restaurant seats 70 and the Sudaks will increase their limit once they see it run smoothly. Rabbi Sudak intends to open the Golders Green branch for Shabbat dinners as well.

Visitors and tourists to London are welcome to try the Bloom's-Chabad Shabbos dinner, For more information, click here.