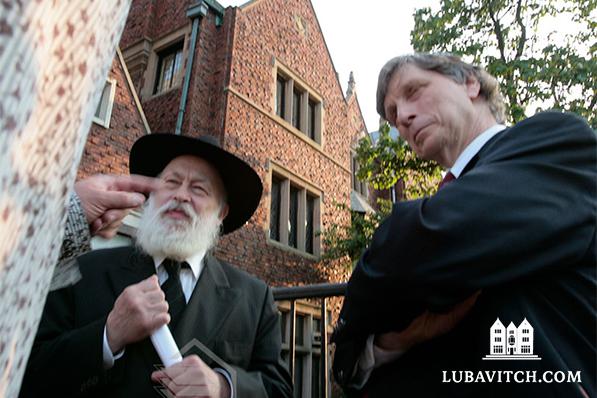 “All created beings pass before You, like a flock of sheep. As a shepherd examines his flock, so do You cause to pass before You every living soul, and You count, reckon, and are mindful of the soul of all life.” (Unetaneh Tokef—liturgy of the High Holy Days)

Shortly before Rosh Hashanah in 1988, a New York Times reporter had come to see the Rebbe. At the time, the Rebbe—in mourning over his wife who had passed away several months earlier —had transferred his office from Eastern Parkway to his home, where he remained for the duration of the year.

It was not a scheduled meeting, but the reporter, Ari Goldman, was preparing an article about the Jewish New Year, and he wanted to ask the Rebbe some related questions. Accompanying him was a photographer, Ruby Washington, who I later learned was the first female African-American photographer for The New York Times.

Mr. Goldman arrived as the Rebbe was about to leave for the Ohel, where he spent many hours at his predecessor’s gravesite. Year-round, the Rebbe received countless petitions from people who sought his blessings, and it was his custom to read these petitions at the Ohel. In the days prior to Rosh Hashanah, the quantity of these letters would increase considerably, so the Rebbe would spend even more time at the Ohel.

As the Rebbe emerged from the back of his house and made his way to the car, the reporter approached him. The Rebbe paused and responded graciously to his questions. In the meantime, the photographer shot some photos. It lasted all of a few minutes. Before he left, the Rebbe wished the reporter a good, sweet new year. He then turned to Ms. Washington and extended the same blessings to her.

As soon as we got into the car, the Rebbe expressed concern. Might the photographer have been offended by his blessing? After all, the Rebbe said, she wasn’t Jewish, and she would not be celebrating Rosh Hashanah as her new year. The Rebbe suggested that I call Mr. Goldman and ask him to explain to Ms. Washington that on the Jewish New Year we pray for all of humanity.

While the Rebbe sat in the front passenger seat next to me, I used the car phone to call Mr. Goldman, and relay the Rebbe’s message. Later, Mr. Goldman would tell me that both he and Ms. Washington were deeply moved by the Rebbe’s sensitivity—and that the photographer was very appreciative of  the Rebbe’s new year wishes in the first place.

Each of us comes into the New Year with heartfelt prayers for ourselves, for our families and friends. We pray for the wellbeing of the Jewish people everywhere, and for peace and security in the land of Israel.

But, it is not enough to pray only for our own community and concerns. The Rebbe taught that on Rosh Hashanah we commemorate the creation of all humankind. The Jewish New Year corresponds to the sixth day of creation, when G-d formed Adam and Eve, the archetypes and ancestors of all humanity. As the liturgy reminds us, on Rosh Hashanah G-d counts, remembers, and judges each and every soul.

As we embark on the new year, we must cast a wider net, and pray for the healing of our deeply fragmented society. In this age of 24-hour news cycles and the internet, we are no longer spared the knowledge of how painfully fractured our world is, or of how much suffering exists in it. We cannot remain  indifferent. Just as G-d counts each and every individual being, we too must pray for everyone, wherever they are and whoever they may be, for a better world.

May our prayers be answered with G-d’s blessings of peace, healing and happiness. May we all be inscribed and sealed for a blessed year in every way—materially and spiritually.

This article was featured in Lubavitch International, Summer 2019. To order your copy, visit www.lubavitch.com