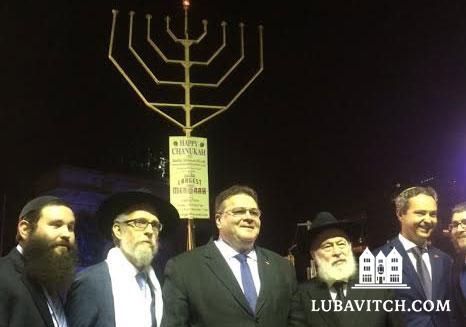 When the Rebbe inaugurated the public Chanukah menorah lighting campaign more than 40 years ago, Chanukah was not as well known to the broader public, and had nowhere the level of popularity and observance it enjoys today.

The Rebbe’s initiative, now advanced mainly by his Shluchim in 50 states and 90 countries, called for installing Chanukah menorahs outdoors in public places and otherwise where they would be clearly visible. This would be in the spirit of “pirsumei nissa”—the mitzvah to publicize the historic miracle of this holiday and its symbols of light, freedom and Jewish pride.

At the outset, opponents claimed that the display of Chanukah menorahs on government property was prohibited by the U.S. Constitution’s Establishment Clause. Considerable opposition also came from Jewish “establishment” organizations and individuals who were uncomfortable with such public displays of Jewish tradition.

Chabad was subsequently forced to argue its case in federal, state and municipal courts all across the country. In 1989 it ultimately came before the Supreme Court of the United States. Allegheny vs. ACLU concerned the menorah Chabad erected in Pittsburgh on the front lawn of the City County Building. Chabad won the case.

Auspiciously, the court’s decision came down on July 3, 1989, and the story of the Chabad menorah victory appeared on the front page of The New York Times the following morning, July 4, 1989, the anniversary of the Day of Independence of the United States of America.

Notwithstanding the U.S. Supreme Court’s favorable decision, litigation continued all over the country for several years, including in about a half dozen federal courts. In each case, Chabad came out victorious. Over time, the adversity diminished, and many of those fighting the public menorah lightings have themselves joined these lightings in their respective communities.

This practice has since been readily adopted and honored by communities and their leaders in Europe and other continents. High ranking Government officials in just about every important capital in the world are honored to participate in these public events.

On the fourth day of Chanukah this year, I received word that Lithuania’s Minister of Foreign Affairs, Linus Linkevicius, was visiting in New York, and wanted to join that night’s Chabad’s menorah lighting in Brooklyn at Grand Army Plaza, at the foot of Eastern Parkway.

I met him there with his entourage including his Consul General in New York, Julius Pranevičius, just a few minutes from Lubavitch Headquarters. He was delighted to be there and spoke briefly to the assembled about Chanukah’s messages of freedom and hope for all of humanity.

Thousands of miles away on that same day, in his capital city of Vilnius, hundreds of Jews participated at a very similar Chabad menorah lighting at the city’s center. Mrs. Faina Kukliansky, Chairwoman of the Jewish community of Lithuania, and the Mayor of Vilnius, Remigijus Simasius, attended and spoke to the crowd. Almost instantaneously the Mayor and the Foreign Minister were sharing photos of their proud participation at their respective Chanukah events in Brooklyn and Vilnius.

Vilnius’s once bustling Jewish metropolis where students and famous scholars flocked to study and teach Torah at its prodigious yeshivas, was extinguished by the Holocaust. Now, poignantly, Jews were once again commemorating Chanukah’s victory against all odds, dancing in the streets while celebrating the menorah lights, every night of Chanukah.

The reports still coming in about such Chanukah events around the globe confirm the success of the Rebbe’s vision and call for a more pervasive worldwide Chanukah observance and celebration. The Rebbe’s Chanukah campaign succeeded to bring ever larger numbers of men, women and children together at both public and private menorah lightings, attracting countless individuals to kindle their own menorahs in their own homes together with family and friends.

The end result? This Chanukah might likely have been the most widely celebrated Jewish holiday in our time.

Maybe of all time?

Related Articles
View All
Chanukah
Virtual Hugs for the Hospitalized
Rachel* clutched the package close to her chest, in her room at Morristown Medical Center. In the hospital for a month as she is treated…
Chanukah
Music, Light, and Love for US Troops
It began with a little music.  Chaplain to the Iron Rangers and Rabbi on Post at Fort Riley Army Installation in North Central Kansas, Rabbi…
Chanukah
When Kids Are The Lone Menorah
"On the one hand you know you’re different, on the other, all you want is to fit in with your peers," explains Shachar. Her Israeli-raised…
Chanukah
Is This Chanukah Story Too Violent For Children?
“Chanah and Her Seven Sons” is a classic Chanukah tale. It is a story of faith, courage, and resilience. But is also a story of…
Get Inspiration to your inbox!
Newsletter
Join our weekly newsletter for inspiration and updates
Donate
Find Your Local Chabad Center
Subscribe
|
Log In
Chabad
About Chabad-Lubavitch
About Chabad Lubavitch
The Rebbe
Headquarters
Magazine
Magazine
News
News & Updates
In The Media
Impact
Social and Humanitarian
Social and Humanitarian
Education
Education
Community
Community