Congressman Ted Deutsch: Chabad Inspires Him to Speak His Conscience 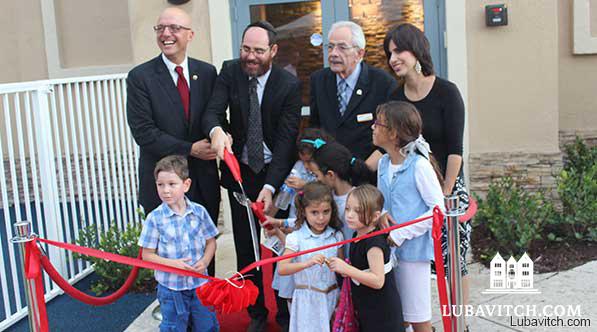 Congressman Ted Deutsch (left) at the ribbon cutting of the Chabad Chai Center in Coral Springs, Florida. Below: The new building.

Under a heavy downpour of rain, members of the Coral Springs Jewish community attended the August 13th opening of the Chai Chabad Center in Coral Springs, Florida. Congressman Ted Deutch (D-FL), offered warm greetings and accolades for Chabad’s dedication on behalf of the Jewish people who, he said, inspire him to speak his conscience against the Iran deal, even as he faces fierce opposition in Congress.

“Chabad who cares strongly about Jewish continuity, where very Jew is an entire world, inspires me in the halls of congress, where my stance on the Iranian deal is unpopular [in the Democratic party],” he told the crowd. “Being at today’s event gives me strength in my struggle.”

The center, which features a Machne Israel Development Fund Early Childhood Initiative, funded by philanthropists David and Laura Slager, is focusing on building an outstanding preschool with best teaching practices in a beautiful setting.

Located in the western corner of Coral Springs, the school and community is drawing young families to its children’s programming in an area where local schools have high ratings and have attracted young families. The new building includes multipurpose space with a synagogue, kosher kitchen, social room, and preschool.

“It’s been a dream [come true],” said community member Allen Kopelman, a digital marketing and branding professional, who dedicated the center’s lobby in the memory of his father Kenneth. Set just off the Sawgrass Expressway, the new building is centrally located. “It’s important to have a [proper] presence, and as the rabbi always taught us, you have got to create a vessel and believe in the materialization of that dream,” said Kopelman.

Despite the downpour, a sizable crowd turned out. Guests toured the new facility and enjoyed a musical accompaniment by the Kosher Rock band.

Harold White, a Christian feted at the event, was the real estate broker for the bank that owned the property. The 76 year-old had been on the property in March of 2014 when he fell and hit his head on a rock. Providentially, Chabad representatives, Rabbi Hershy and Chanie Bronstein were on their way out of what was then the Chabad House, located in a storefront across the street, and ran to assist the broker with his injuries.

Insisting that he was okay and didn’t need an ambulance, White told the couple that he was there to install a “for sale” sign. Incredulous, Bronstein told White that he had been trying to reach the bank for two years with the hope of purchasing the property. White negotiated the price that morning and signed a contract with Chabad the following day.

“The Chai center is going to be a magnet for the local Jewish community,” says Bart Dinin, a local contractor “We’re all expecting this will draw new, young families who want to reconnect with their roots and their children with Judaism. I know that the beauty of the new building and the comfort of the space will attract tremendous interest.”

Congressman Deutch participated at the ribbon cutting and the formal opening of the new state-of-the-art Chabad center.

Related Articles
View All
New Chabad Ottawa Torah Center Takes City Builder Award
The Chabad representatives serving the Barrhaven suburb of Canada’s capital took many community-building steps before crowning it with a $4.5 million edifice that garnered the…
Arizona’s Mountain Range Jewish Community on the Rise
With views overlooking the San Francisco Peaks, the future home of Chabad of Flagstaff will sit on a central road, close to Northern Arizona University—the…
Chabad Dedicates Opening of New Building in Buenos Aires’s Soho
Make sure the length of this blurb stays above the black line below.
A New Building for Chabad in Tokyo
(lubavitch.com/LNS) Chabad-Lubavitch of Japan announced a happy end to its long search for a new building. “After years of looking, we found a beautiful 400…
New Home for Peabody Chabad in the New Year
Chabad of Peabody, Massachusetts, bursting at the seams of its current location, will begin the Jewish New Year with the purchase of a new building.
Chabad at WVU Opens New Space on Campus
Location, location, location. For Chabad of Morgantown, West Virginia, that was at the top of their wish list in their search for a new home.
Built on Inclusiveness, New Center Shapes Aspen’s Jewish Community
The $18 million building was at least a decade in the making. Now complete, the Mintzs say this is only a beginning. “We have to…
Get Inspiration to your inbox!
Newsletter
Join our weekly newsletter for inspiration and updates
Donate
Find Your Local Chabad Center
Subscribe
|
Log In
Chabad
About Chabad-Lubavitch
About Chabad Lubavitch
The Rebbe
Headquarters
Magazine
Magazine
News
News & Updates
In The Media
Impact
Social and Humanitarian
Social and Humanitarian
Education
Education
Community
Community