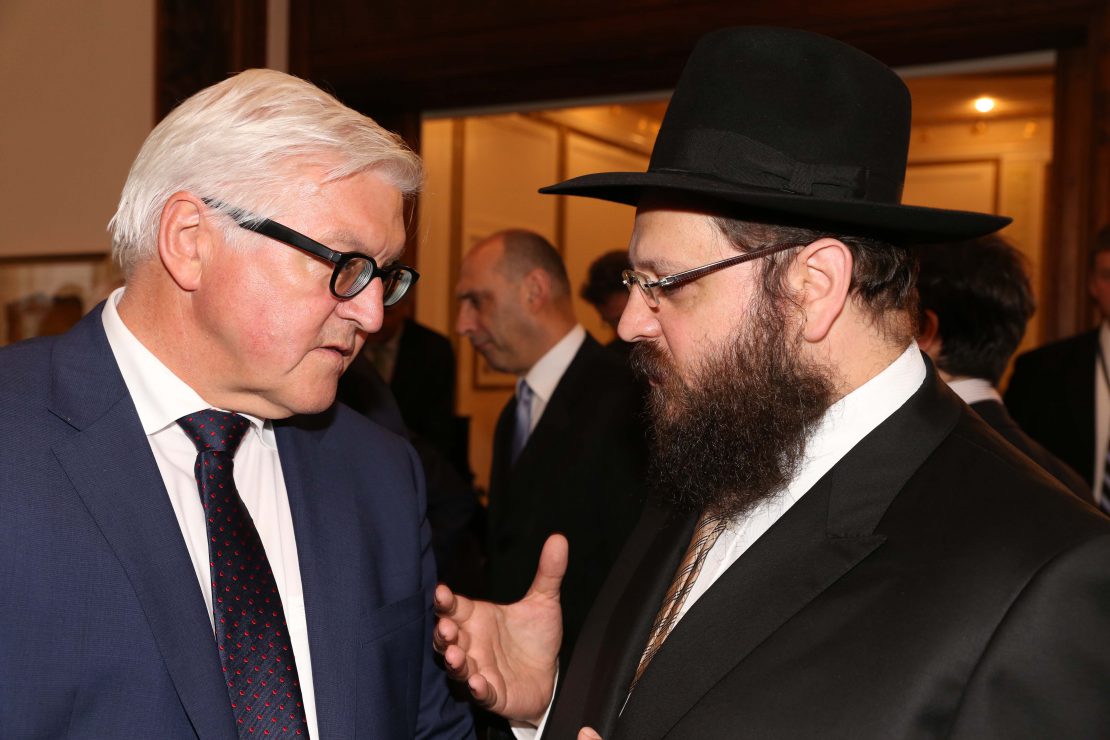 A first in more than 100 years, the siddur was co-published by the Judeisches Jewish publishing house in Berlin newly founded by Berlin’s rabbi and Chabad emissary Rabbi Yehuda Teichtal, and the Kehot Publication Society. “Publishing this siddur is our way of announcing the opening of a new [Jewish] publishing house in Germany,” Teichtal said. The siddur, follows the layout and pagination of the acclaimed Tehillat Hashem Annotated Siddur published by Kehot.

One of the first siddurs with German translation appeared in 1895. It was published by Rabbi Samson Raphael Hirsch, who was the rabbi of the Jewish community in Frankfurt and one of the leading Orthodox Rabbis in nineteenth-century Europe. During the twentieth century, several other siddurs were printed in German as well, but few encompassed all the prayers, and others were divided into several volumes.

“For hundreds of years, the Jewish people commemorate the tribulations that span our history through prayer,” said Rabbi Teichtal. “This year, I’m certain that reciting the prayer ‘Kel Malei Rachamim’ in memory of the six million who were murdered in the Holocaust will evoke great emotion in me, because I will be reciting it along with the contemporary German translation as appears in the new siddur.”

The rabbi reflected on the significance and symbolism of the siddur’s publication, particularly to a young Jewish generation. “In this place where there was an attempt to exterminate European Jewry, there is now a vibrant, active Jewish community, as evidenced by the publication of one of the most prominent and basic Jewish works in the German language. This attest to the spiritual force and power of humanity, and of the Jewish nation in particular. I sincerely hope that this will be a source of inspiration and message of unity to a younger generation.”

The new Tehillat Hashem siddur comprises some 1,400 pages, half of which are in Hebrew and the other half in German. Apart from the actual prayers, translation, and elucidation, the siddur also includes Pirkei Avot; Torah readings for Mondays, Thursdays and Holidays; and basic Jewish laws of prayer. The prayer section is divided into sections for weekday, Shabbat, holidays, and fast days.

Support for the project which was completed by a team of five, including a main editor, translators, and proofreaders, all of whom are members of the Jewish community in Berlin, came from the local community.

This past week, several copies of the siddur arrived in Germany from Israel, where they were printed. The vast majority of the shipment will arrive in coming weeks, and the siddur will be available for purchase in German Jewish communities, as well as on the Swiss Jewish website, Books & Bagels and Amazon.com.

Related Articles
View All
Thousands of Berlin Jews Receive Assistance for Pesach
This year, over 1,000 welfare-supported Jewish families in Berlin received generous food baskets in honor of the holiday of Passover.
From Cemeteries to Celebration: Jewish Students Spend Spring Break in Berlin
While their classmates were spending spring break in warmer climates, 18 Jewish students from the University of Illinois at Urbana-Champaign traveled to Berlin for a…
Books
Book Notes
Scott Frank is a business executive. Yossi Lerman is a Chabad rabbi. Both have been on a quest to find more joy in life.
Books
The Haggadah Collection At The Library Of Agudas Chassidei Chabad
The prestigious Haggadah collection of Chabad’s Central Library began in December 1924, when the sixth Lubavitcher Rebbe, Rabbi Yosef Yitzchak Schneersohn, acquired the collection of…
Books
Hippy In the Mikvah
“The Rebbe encouraged me to continue with the doctorate. I blurted out, ‘But what about the heresy?’ The Rebbe answered: ‘You should write all the…
Books
Book Review: Teaching The Teachers
I spoke to an Israeli kindergarten teacher this summer who explained to me how the philosophy of early childhood education has changed. “Today,” she said,…
Get Inspiration to your inbox!
Newsletter
Join our weekly newsletter for inspiration and updates
Donate
Find Your Local Chabad Center
Subscribe
|
Log In
Chabad
About Chabad-Lubavitch
About Chabad Lubavitch
The Rebbe
Headquarters
Magazine
Magazine
News
News & Updates
In The Media
Impact
Social and Humanitarian
Social and Humanitarian
Education
Education
Community
Community