For 18 Jewish students at Illini U, Spring break is a chance to display Jewish pride 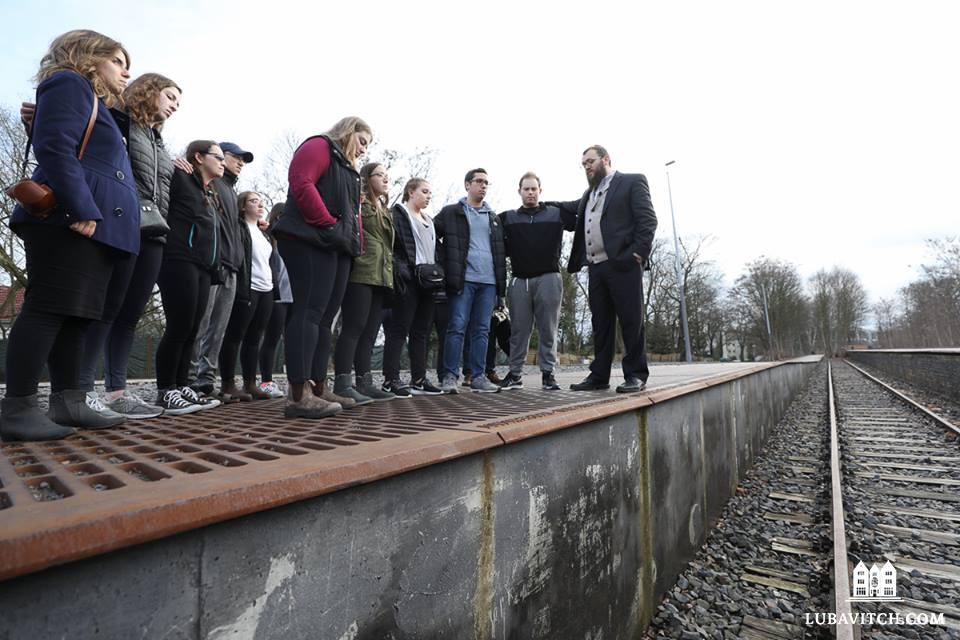 While their classmates were spending spring break in warmer climates, 18 Jewish students from the University of Illinois at Urbana-Champaign traveled to Berlin for a week long Alternative Spring Break. Led by Rabbi Dovid Tiechtel, co-director of Illini Chabad, the ASB students explored a thriving Jewish community in Berlin.

Upon arriving in Berlin on March 20th, the students were greeted by Berlin’s mayor and minister of culture, after which they paid a visit to the Israeli embassy. Later, the students met with the U.S. Ambassador to Berlin and the Berlin Minister of Interior.

“I went to Berlin to further connect to my Jewish heritage and to stand with pride in the country that once said that I do not deserve to be alive,” said freshman Mikayla Pollard, who participated in the trip.

At one stop on their itinerary, the students cleaned up the Weissensee Cemetery, the resting place of Jewish soldiers who fell during WWI. “These soldiers have no one to come visit them, so in honor of their service, we put a few hours of work into beautifying their resting places,” explained ASB Student Jacob Apter, ‘19.

The group spent Shabbat at the home of Rabbi Yehuda and Leah Tiechtel, directors of Chabad-Lubavitch of Berlin, where they packaged and distributed Shabbat meals to 80 needy Jewish families. Later, the students joined other members of the Berlin Jewish community in the traditional Friday night prayers, meal, and celebrations.

The students also visited the building that used to house the activities of the Hitler Youth (now home to a thriving Jewish day school), saw Hitler’s bunker, and toured the Theresienstadt concentration camp, where they got a look at the secret, makeshift synagogue that the Jews had constructed.

“Touring the main streets of Berlin has changed the way I see myself as a Jew,” shared junior Matt Sherman. “Today I feel that pride of being a Jew. I reflected upon not just the past, but the present and the future of the Jewish People.”

“The ASB Berlin trip was an emotional roller coaster and a huge success,” said Rabbi Dovid Tiechtel. “The students felt victorious as Jews and brought light to what was once the seat of Nazi power. We are here, they are not. I’m proud to say that we took action, connected with each other and the Jews of Berlin, and the students came back empowered to lead others in building Jewish unity wherever they go.”

This is the ninth year that Illini Chabad has sponsored the ASB Berlin trip. The students worked year-round to prepare for the trip by raising funds, as well as attending weekly meetings at Chabad.

Related Articles
View All
Chabad at University of Illinois Opens Hospitality House
Students and parents at the University of Illinois Urabana-Champaign now have a place to unwind and spend a quiet night.
University of Illinois Men’s Basketball Team, ZBT Fraternity and Chabad Host Annual Alley Oop for Autism
(lubavitch.com)  University of Illinois Men’s basketball team with coach Bruce Weber hosted the 4th Annual Alley Oop for Autism, a philanthropy project by the…
Get Inspiration to your inbox!
Newsletter
Join our weekly newsletter for inspiration and updates
Donate
Find Your Local Chabad Center
Chabad
About Chabad-Lubavitch
About Chabad Lubavitch
The Rebbe
Headquarters
Magazine
Magazine
News
News & Updates
In The Media
Impact
Social and Humanitarian
Social and Humanitarian
Education
Education
Community
Community