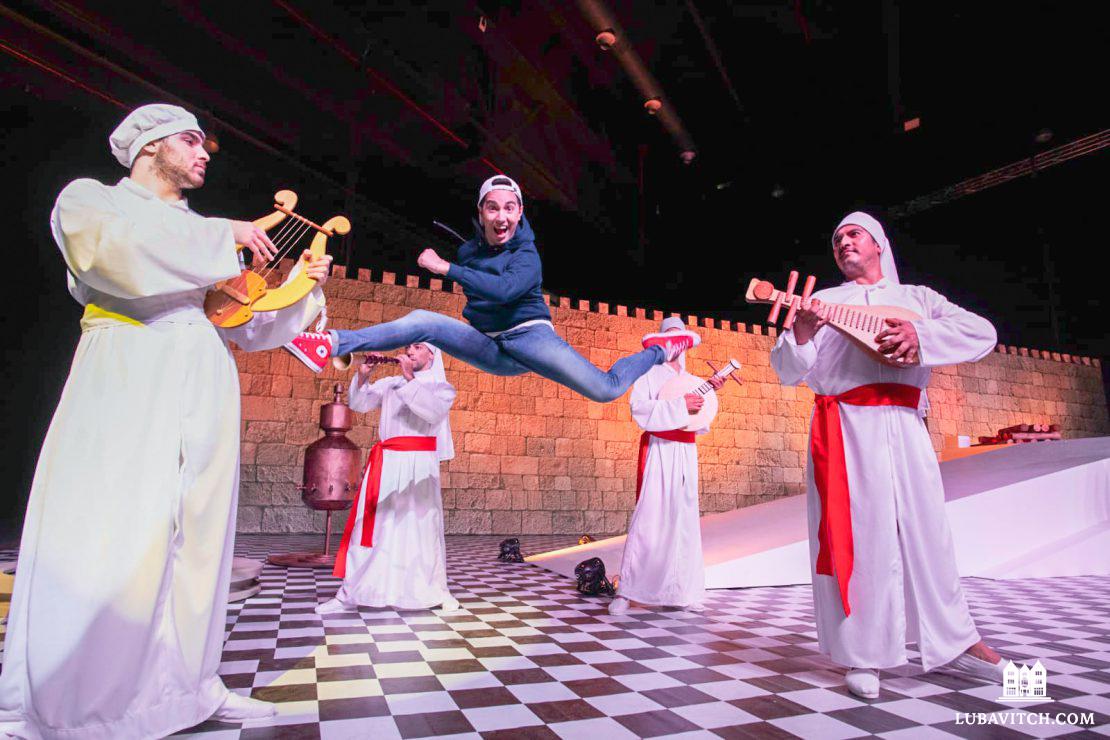 An epic endeavor commenced the moment Chabad of Argentina received approval from the La Rural exposition center to produce an avant-garde theatrical production, Aventura en el Templo (Adventure in the Temple) at the venue in Buenos Aires. It typically takes four to six months to prepare a theatrical production. Chabad of Argentina had just four weeks to bring their vision to life.

Remarkably, Aventura en el Templo turned out to be a run-away success. As word spread, some 14,700 Jewish Argentines of all stripes rushed to see the one-of-a-kind drive-through performance over ten days.

In late July, Chabad of Argentina typically uses the southern hemisphere’s mid-winter break to educate the Jewish community about the Beit HaMikdash (the Holy Temple). In 2014 they built a scale model, which was ferried around to schools and educational institutions each subsequent year, to educate children and adults alike about the second Temple. Covid-19 changed that. With the country entering a strict lockdown, any form of in-person programming was out of the question. “As the lockdown entered its second year, we turned the problem created by the pandemic into creative inspiration,” said Rabbi Tzvi Grunblatt, director of Chabad of Argentina. “We knew we had to do something in-person that families could enjoy without exposing themselves to the virus.”

Ordinarily, the La Rural exposition center is teeming with activity in July. Since 1866, the venue has hosted an agricultural and livestock show attended by hundreds of thousands annually. But Covid-19 left the venue deserted. Seizing this unique opportunity, Chabad approached La Rural with a wild idea: to host a drive-through theatrical performance in the unused space. Although initially skeptical that Chabad could assemble all the necessary components on such short notice, the venue eventually agreed to the proposition. By then, Chabad had only four weeks to prepare before the beginning of winter break on July 19.

Rabbi Levi Silberstein, alongside his wife Mrs. Etti Silberstein, headed the production team. “We had to create stage design, a script, actors, logistics, communication plan, and a million other things from scratch,” said Mrs. Silberstein. To pull it off, they had six workshops working around the clock. Aventura en el Templo Producer Maxi Bartfeld worked with thirty-five people simultaneously to design and assemble the five different stages on which the show would take place. Bringing the Beit Hamikdash to life was made easier by the scale replica Chabad had on hand. “Rabbi Levi Silberstein brought us in and gave us a crash course on the Beit Hamikdash to help us understand the space and choose how to explain it,” recalls Art Director Belen Sanchez.

As the physical stages came together in the twenty thousand square foot facility, and playwright Flor Yadid threaded together an original script, Chabad launched an aggressive marketing campaign for the event. There was advertising in the popular daily newspaper La Nación and on radio and social media. Most families who flocked to the show were drawn by word of mouth.

As the first vehicles entered the “time machine tunnel” leading into the show at 2:00 pm on July 19, the broad social spectrum of the viewers was apparent. BMWs pulled up alongside specially hired taxis, the latter packed with eager families who did not have the means to afford a car of their own.

In groups of six, cars emerged from the tunnel while neon vested staff directed them to park in a semi-circle facing the first stage. Tuned into the show’s sound system via FM radio, the spectators followed the exploits of a fellow “time traveler” named Toby as he discovered the rituals and rhythms of the daily services in the Temple.

Whimsically, Toby explains that he turns to Google for spiritual guidance, before learning that the Temple is a better place to find a spiritual connection to the divine presence. With a cheeky grin, Toby bounces from stage to stage, leading the viewers from the Ezrat Noshim (Women’s Gallery) through a massive reconstruction of Nicanor’s Gate, and on to the Courtyard of the Temple itself. All the while, Toby learns about the daily service in a humorous and dramatic retelling of the “Avodah.” Finally, he arrives at the Heichal, the “holy sanctuary” itself. Here, aptly staged video screens guide him through the innermost sanctum of Judaism, the Holy of Holies.

A key theme woven throughout the script is the message that we each have our personal Temple inside. When the narration speaks about the Menorah, the golden candelabrum housed in the sanctuary, it pauses to elaborate on the symbolism of the flame. “A small flame burns in each of us, but for it to burn, it requires fuel.” The narrator’s voice booms, “The fuel of our inner light is the good deeds and the mitzvot that we perform.” The thirty-minute show comes to a dramatic close at the Kotel, or “Western Wall.”

The technical hurdles of coordinating the five stages proved enormous. Each scene lasted precisely six minutes to synchronize the five groups of cars moving through the building. The twenty-five actors who created the performance reenacted their scenes non-stop from 2:00 pm until as late as 10:30 pm each day. For two weeks, the cars kept flowing. Popular demand for the show coaxed the showrunners to reopen for a final run late on a Saturday night.
The show left the Argentine Jewish community abuzz. Wrote one enthusiastic mother, “It was like Disneyland in Argentina!” After experiencing the show, Mrs. Nuria Alma said it made her relive her family’s trip to Israel years before. “It was all we talked about the entire day. We went home and spent the day going through photo albums from our trip,” she raved. The show left a lasting impact on her and her family. “It touched our hearts, and I can’t imagine the tremendous difference it’s making for so many families throughout the community.”