All Dressed Up And Ready To Go 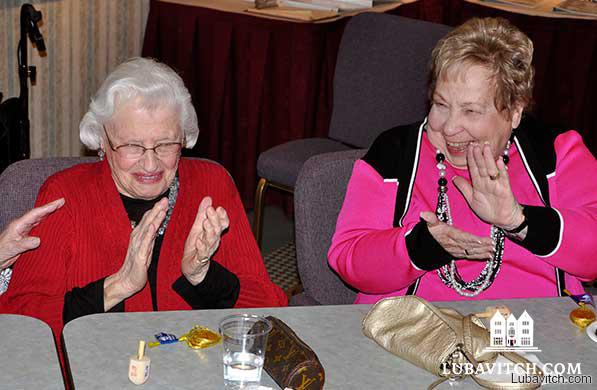 Seniors enjoy a Chanukah dreidel game with Chabad. Below: Chani Levertov enjoys a light moment with a senior; a volunteer with a senior.

Dolly and Dan Dworkins, both in their 90s, have been married for almost 70 years. Dan had a highly successful and prestigious position in the United States Agency for International Development, and both he and his wife continued to work well into their seventies.

Some time ago, they accepted an invitation to a dinner in the hope of meeting new friends. “I’m not much of a believer, but that invitation proved to be miraculous for me,” says Dolly.

The dinner was hosted by Smile on Seniors (SOS), a fledgling organization based in Phoenix, Arizona. Its aim is to improve the life of local seniors by providing programming and regular visits between volunteers and members.

Not long after they had become part of the SOS community, the Dworkins lost their daughter, Ida, to prescription drugs. When they returned home after finding her lifeless, the first people they reached out to were Rabbi Levi Levertov and his wife Chani, who founded SOS in 2009.

In an emotional speech at last year’s fundraiser, Dolly said that “Smile on Seniors, which I thought had been a way to meet people, became a source of support and comfort for me. The volunteers and Chabad members became our extended family. I have been given unconditional acceptance and love.”

The Dworkins are among many in Phoenix’s elderly community who are feeling the impact of SOS. The organization has introduced a way to connect with Judaism beyond its culture, inviting them—many for the first time—to become part of a Jewish community.

“It’s made a difference to people like me who are only marginally aware of Jewish practices,” said one woman.

When her husband passed away, Bea Markow, 77, decided she needed more interaction” in her life. I chose Brookdale Senior Living mainly because there were lots of Jewish people there. One of my early discoveries was a program led by Rabbi Levy. I was amazed! He was so smart, so interesting, kind, and compassionate, with a great sense of humor and warmth. I have never known this level of teaching in Judaism.”

The Levertovs started the organization after realizing how many seniors there were in Phoenix and how poorly their needs and interests were being met. “There was a need, so we filled it,” Rabbi Levi notes pragmatically. Modelling the program after a similar one that had been initiated in New Jersey by Rabbi Mendy Kasowitz, they have since dramatically broadened its scope and reach.

Visits by volunteers, social events such as Sip and Shmooze at Starbucks; Lunch and Learn study sessions, holiday programming, and of course, Shabbat dinners which the Levertovs lead at Chabad of Phoenix, have so far impacted over a thousand people, and as many as sixty retirement homes are now affiliated with it.

Rabbi Levertov is quick to admit that Shabbat dinner was his wife’s initiative, an idea that he was not excited about at first. When one of the guests told him that “this is the only time I get to dress up for something,” he understood its significance.

Shabbat meals are an opportunity for the guests to “really become our friends,” says Chani. “During the week, everyone is in their compartmentalized retirement community. At our meals, they can meet other people and be part of a wider Jewish community.” At last count, 140 people attended.

The volunteers, of all ages, diverse backgrounds and Jewish affiliations, learn about the opportunity through word-of-mouth. They are trained by Lesley Levy, an occupational therapist, who prepares them for making one-on-one visits that often result in rewarding friendships. Chani, who administers the volunteer network, loved it when one woman, an 83-year-old, volunteered to visit with a 76 year-old woman.

Smile-on-Seniors has plans to establish a community center, as well as a mobile library system, and to reach out to even more seniors. The bonds formed make the loss of members who become an integral part of the community, emotionally taxing. “We get to know people well, so it’s hard, but we know that we are here for a purpose and it is so gratifying for us,” says Rabbi Levertov.

Related Articles
View All
Monday the Rabbi Brought Soup
Rabbi Shmuel Marcus, Chabad emissary to Los Alamitos, California is driving very, very carefully. In the back seat of his car is a box with…
It’s Pies for Joy to Say Thanks to Seniors
It was all smiles when preschool children and their families made Pies for Joy for seniors in time for Thanksgiving. The Gan Camarillo Preschool and…
Initiatives at the Chabad Conference: Smile On Seniors (SOS)
As an outreach activity, visiting seniors is even older than the people it serves. But Chabad’s new “Smile On Seniors” approach to bonding with the…
Chabad’s SOS Raises Awareness, Activism for Elderly
(lubavitch.com) There’s something funny about Don Rickles, 82, headlining at the first annual Smile on Seniors “Joy and Laughter” event on June 29 at the New Jersey…
Tuesday The Rabbi Was Late
(lubavitch.com) It was a beautiful Tuesday afternoon in Austin. The sun beamed overhead in a cloudless blue sky, and throngs of Austinites were outdoors enjoying…
Get Inspiration to your inbox!
Newsletter
Join our weekly newsletter for inspiration and updates
Donate
Find Your Local Chabad Center
Chabad
About Chabad-Lubavitch
About Chabad Lubavitch
The Rebbe
Headquarters
Magazine
Magazine
News
News & Updates
In The Media
Impact
Social and Humanitarian
Social and Humanitarian
Education
Education
Community
Community