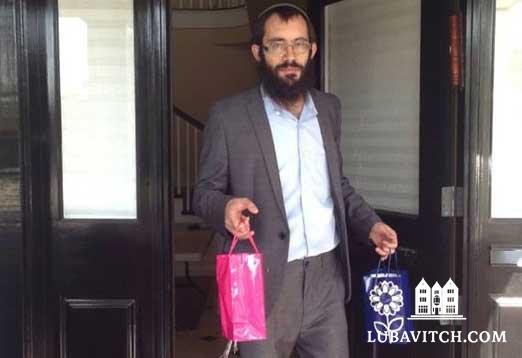 Rabbi Shmuel Marcus, Chabad emissary to Los Alamitos, California is driving very, very carefully. In the back seat of his car is a box with over a dozen 32 ounce containers of fresh, hot chicken soup wrapped in hot pink bags, and he does not want them to spill as he navigates an unfamiliar part of town. The homemade soup was just cooked by Marcus’s wife, Bluma, at their Chabad House, and the rabbi is on his way to personally deliver the containers, one by one, to elderly community members, shut-ins and families in crisis.

The soup delivery is part of a Chabad program called Grandma Ethel’s Chicken Soup. The program is named after Ethel Howard, a local senior in the southern California community who recently passed away. In her last years, Ethel resided in a senior living home and one of the highlights of her day were surprise visits from the local Chabad rabbi.

After her passing, her son, Gary Howard, a prominent litigation CPA, established the program in her memory. Howard explains that his mom Ethel loved the traditional Jewish dish. Appreciating how comforting a bowl of homemade kosher chicken soup can be, he established the program he hopes will spread that warmth and comfort to the elderly, the sick and families in need.

“Chabad has always given out chicken soup to those in need,” Marcus explains. “It’s part of the way we show how much we care for the wellbeing of our community members.”

The tradition has been a part of Chabad culture for hundreds of years, the rabbi says, relating a story of how the founding Rebbe of Chabad, Rabbi Shneur Zalman of Liadi, who lived in the late 1700s, interrupted a Yom Kippur service to go cook soup for a mother who was recovering from childbirth.

But with Howard’s support the tradition has grown from a sporadic soup or two to a fully-developed program with over 200 soups prepared each month and 20 youth volunteers to help with the deliveries. These volunteers are typically members of Chabad’s Hebrew High school and local Jewish college students who are looking for a way to give back.

The system of connecting the young students with a senior has been one of the most successful aspects of the program.

Darlene Rose, an active member of Chabad’s Schmooze Club who worked as an assistant at a local Jewish synagogue in town before retiring says that what “seems like a small kindness really makes a big difference. The soup is so comforting and so delicious, and everyone who gets it appreciates it.”

As important, the soup comes with a personal visit. The Chabad trained volunteers engage and “check up” on the older segment of the community, people who can easily fall between the cracks. These critical visits can have life-saving effects and their impact is felt long after the soup is finished.

Marcus has dozens of stories, like those when a volunteer arrived with soup just in the nick of time to help  an 87-year old man who had fallen and his wife couldn’t get him off the ground; the 84-year old man who was too weak to even open the lid of the food container and had not eaten; and the elderly woman whose hired help was taking advantage of her weakened condition and was stealing from her checkbook.

Marcus anticipates feedback from the volunteers “our eyes on the ground” and makes sure to follow up.  “We help arrange doctor appointments and connect those who can’t afford it with physicians in our network who will work pro bono, and we facilitate and advocate for transportation and meals for seniors. It has come to a point where the soup is really the smallest part of the program.”

For Evelyn Glick, 88, the chicken soup deliveries are just one of the ways Chabad cares for local seniors.  The octogenarian helped found Chabad’s senior Schmooze Club, a monthly social gathering for the 55+ crowd. As an involved member of the local elderly community, Glick has seen firsthand the benefits a bowl of homemade soup can have, and has herself benefitted from what she calls “a real treat” when she was under the weather.

“A bowl of chicken soup is a Jewish icon of warmth and healing,” says Glick, recalling memories of enjoying the classic dish from her youth. “Even modern science today shows that it can help people feel better.”

But it’s the visits she enjoys the most.

“Rabbi Marcus is just our number one guy,” Glick enthuses. “His kindness is so genuine and he really makes us feel so good.”

With over 1500 containers of soup delivered, the program is currently expanding the areas which they service.

Says Marcus, “It is my goal to reach as many people in need as possible with a visit, a kind word, and a piping hot bowl of chicken soup.”

Related Articles
View All
90210 Meets Judaism 101
“Public schools should not be hostile to the religious rights of their students and their families,” said Education Secretary Rod Paige in a February 7th…
Jewish Children in Public School: Chabad to Combat Assimilation
A conspicuous 66% of Jewish kids are missing in action. They are, according to National Jewish Population and Avi Chai studies, the number of Jewish…
Features
Wordsmith: Chasid
As is true of every close-knit cultural group that enjoys a history, traditions and habits particular and peculiar to it, conversations among Chabad Chasidim are…
Features
Remembering The Struggle for Russian Jewry
Ninety-three years ago today, Rabbi Joseph I. Schneersohn, sixth Lubavitcher Rebbe, was freed from Soviet-imposed exile.
Features
Wordsmith: Tamim
The tamim is unflappable. He does not sway with the winds of change, nor bend to meet the expectations of others. He is a simple…
Features
Remembering Rebbetzin Chana: Jewish Feminine Role Model
Rebbetzin Chana Schneerson, a feminine role model of Jewish activism and proponent of Jewish scholarship, mother of the Lubavitcher Rebbe and wife of Rabbi Levi…
Get Inspiration to your inbox!
Newsletter
Join our weekly newsletter for inspiration and updates
Donate
Find Your Local Chabad Center
Chabad
About Chabad-Lubavitch
About Chabad Lubavitch
The Rebbe
Headquarters
Magazine
Magazine
News
News & Updates
In The Media
Impact
Social and Humanitarian
Social and Humanitarian
Education
Education
Community
Community