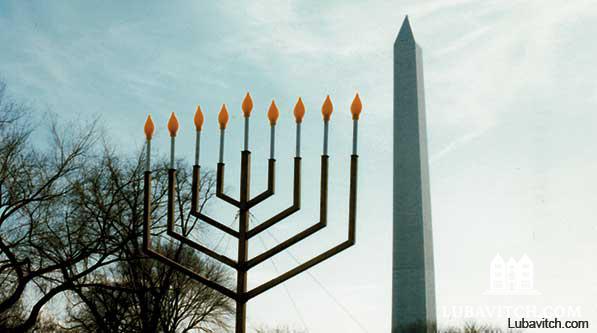 Standing in the shadow of American icons, the White House and the Washington Monument, the Vice President of the United States of America thanked the Chabad-Lubavitch movement for erecting the menorah and spoke of its leader the Lubavitcher Rebbe, Rabbi Menachem Mendel Schneerson, of righteous memory.

Public menorah lightings, in the past debated and controversial, are now marked across the United States as a celebration of religious freedom. “The ongoing miracle of coming together in a nation that respects the freedom to live and worship in peace, the same freedom that the Maccabees fought for so very, very long ago,” Vice President Joe Biden told the assembled in an event that was broadcasted and reported live across the globe.

It was not always that way. Opposition came largely from civil libertarians concerned that a menorah on public property is breach of separation of Church and State in the establishment clause.” The Rebbe, who inspired the idea to erect and light menorahs on public property, disagreed.

“I am fully certain that none of all those who participated in, or witnessed, the kindling of a Chanukah lamp in a public place … felt that his or her loyalty to the Constitution of USA had been weakened or compromised thereby,” the Rebbe wrote to executive vice president of Central Conference of American [Reform] Rabbis (CCAR) in 1978. “The U.S. Congress opens with a religious invocation by a representative of ‘one of the major religions’ in this country; and, surely, the U.S. Congress, comprising each and every State of the Union, is the place where the Constitution of the USA should be most rigidly upheld.”

Jonathan Sarna, Professor of American Jewish History at Brandeis University told lubavitch.com that Chabad menorahs today are not only a non-issue for the young American Jews, the fact is that the menorahs are now a part of the fabric of American culture during the holiday season. “I think for young Jews, the celebration of Chanukah has meant that something to be proud of as well, instead of hiding under the covers, so to speak, when they see a Christmas tree,” he said. “There is now a bigger sense that Jews have their own holiday.”

When he was a child, he recalls Jews felt as outsiders during the holiday season and today because of the Chabad menorahs, Jews feel like true Americans insiders. “That turned out to be a very successful strategy,” he says of the Chabad’s campaign to bring Chanukah into the public sphere.

Forty-one years ago, Rabbi Shmuel Lipsker and his friends were giving out menorahs on the corner of Fifth Avenue and Forty-Seventh Street in Manhattan. “But I wanted to people to come get one, so I came up with the idea to create a Car Menorah,” he recalls.

He and two of his friends, took two by fours and banged them together with scraps from his father’s carpentry workshop. Lipsker, sitting in his Brooklyn office of Colel Chabad, the oldest Israeli humanitarian organization, explains how he built the menorah and then “took a cinderblock, placed the menorah into the cinderblock on top of a rented station wagon and tied sides of the menorah down with rope.”

For the first few days the menorah had no lights or candles. “A few days into Chanukah we thought of placing lights on the menorah. That night at five o’clock, as everyone was leaving their offices, they erected the very first menorah on public property and a large crowd gathered around to see the spectacle.”

Lipsker’s endeavor created an avalanche of public menorahs, with the first large public menorah lighting in S. Francisco, California, in 1975. “We just wanted to reach as many Jews as possible and never intended it to make history,” Lipsker said.

Opposition came soon enough from Jewish organizations fearing that once the menorah would be permitted, Christian and other religious displays would create a coercive religious atmosphere. “I have never heard any objection from non-Jews that public Hanukkah displays are a way of forcing Judaism on the general society,” writes David Novack, professor of Jewish studies at the University of Toronto, in Jews and the American Public Square, arguing for the menorah to be in public space. “[The] objection to any public display of religion is resented as taking something away from society.”

Novack argues that religion in America does not belong in the closet. Chabad, he says, “is [more] in harmony with the spirit of American religious pluralism than are some of the secular Jewish organizations that spend untold sums of time and money fighting for no religion in public.”

In the 1980s the erecting of a menorah in Pittsburgh made international headlines, when the case came before the Supreme Court in County of Allegheny v. ACLU. The court at that time permitted for the menorah to be erected accepting the argument that the menorah had a universal message to all.

In a 1981 letter to the Teaneck Jewish community, the Rebbe argued that the menorah represents “[a] universal message of freedom of the human spirit, freedom from tyranny and oppression, and of the ultimate victory of good over evil…” the Rebbe wrote. “These fundamental human aspirations and principles, as visibly symbolized by [the] kindling of the Chanukah lights, are surely shared by the vast majority of Americans.”

In the years since the ruling, and ever since the first public menorah went up, the concerns as expressed by the CCAR that “the wall of separation between religion and state is like a dike; the slightest breach is a dangerous portent of a torrent to follow,” has according to American Jewish historians been proven to be incorrect.

“I certainly don’t think that the fears of those who argue that the Church State Separation would be forever undermined by the putting of a Chanukah menorah on the streets, turned out to be the case,” says Sarna. “This is not the kind of slippery slope that some thought it would be.”

While he says that those who still believe in the strict separation of Church and State may disagree with the menorah, “They have to recognize that those with a different view are well within American tradition, have good legal basis on which to stand and won before the court,” says Sarna.

Michael Berenbaum, Professor of Jewish Studies at the American Jewish University and Executive Editor of the Encyclopedia Judaica, says that “The fear [of the Seperationists] has been exaggerated and today the presence [of the menorah] in the public sphere has [today] little opposition.”

Proud to be Jewish

Rabbi Yehuda Krinsky, Chairman of Chabad’s educational and social services divisions, Merkos L’Inyonei Chinuch and Machne Israel, said that from the Rebbe’s perspective, the Constitution offered Jews the opportunity to express their heritage, not to fear and hide it.

“The Rebbe believed that we do not need to hide our Judaism. The Rebbe negated what many said ‘The Jew in the home and not on the street.’” The public menorahs, he says, have been the inspiration for countless Jews to learn more about their Judaism.

In an exchange of letters between the Rebbe and the CCAR (published in Religion and State in the American Jewish Experience by Jonathan Sarna and David Dalin (University of Notre Dame Press, 2000), the Rebbe wrote, “The fact is that countless of Jews of the country have been impressed and inspired by the spirit of Chanukah which had been brought to them, to many for the first time.”

And not only Jews. In his remarks at the National Menorah, Vice President Biden said, “The Lubavitcher Rebbe taught us that every living thing must grow and just as Hanukah lights will grow from the first day to the eighth, just as even those who have achieved good and holy things, must never be satisfied with what they’ve achieved yesterday,” Biden told the assembled. “May you all go from strength to strength.”

Related Articles
View All
U.S. Vice President Joins Menorah Lighting
“Tonight is about miracles, the miracle of courageous warriors overcoming the great odds,” Biden said, pointing to another noteworthy miracle: “Thousands of years later, Judaism…
Texas Gov’s Most Memorable Moment: Dancing with the Rabbis
“It’s been fun,” Governor Rick Perry told reporters of his life as Governor. “Some of you got to watch [my son] Griffin walk in the…
From Banks to Office Buildings: Proud to Have Their Own Menorah
It is now forty-one-years since the first Chanukah menorah went up in the public sphere by Chabad-Lubavitch. More recently this phenomenon has been taken on…
As American as Apple Pie: Chanukah at the Stadium
Over a dozen sports stadiums will be hosting Jewish Heritage Nights during the Chanukah holiday, an event that has become popular with sport fans.
Features
Rifka’s Hot & Cold Journey to Judaism
After her stormy teenage years, Rifka Chilungu gave up on atheism, got hooked on Judaism, and missed her college graduation to attend a Brooklyn seminary
Features
Anatomy of a Law
Most commandments in the Torah are so cryptic that a straightforward perusal will leave the reader without the knowledge necessary to understand or fulfill them
Features
I Will Learn It on a Train, I Will Learn It in the Rain
What was once the province of an elite few is now available for free online in every language
Features
Memories of the Heart
Elisha Wiesel speaks with Lubavitch International about his famous father and raising his children to love Yiddishkeit
Get Inspiration to your inbox!
Newsletter
Join our weekly newsletter for inspiration and updates
Donate
Find Your Local Chabad Center
Subscribe
|
Log In
Chabad
About Chabad-Lubavitch
About Chabad Lubavitch
The Rebbe
Headquarters
Magazine
Magazine
News
News & Updates
In The Media
Impact
Social and Humanitarian
Social and Humanitarian
Education
Education
Community
Community