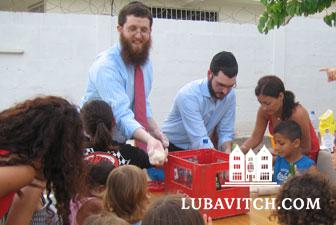 Chabad Shluchim in Accra, Ghana, getting into the spirit of Passover. (lubavitch.com)

(lubavitch.com) It was a rocky start for two of the hundreds of Chabad-Lubavitch rabbinical students dispatched by Merkos, the Lubavitch educational division (with the support of regional Chabad centers) to create a Passover experience for Jewish people in some 150 locations exotic and obscure. Among them: Esquel, Argentina; Nipawin, Canada; Hong Kong; and Pervoo, Finland.

Mostly Israeli, the Jewish population of Ghana is a hard working bunch content to be away from the rife riven politico-religious life in Israel and rather distrusting of anything wearing a yarmulke. They aren’t backpackers seeking enlightenment and things spiritual. They aren’t hungering for a nibble of mama’s gefilte fish. Jewish people living in Ghana are what comedians would term a tough crowd.

But Chabad’s young representatives are masters of seeing possibility even in setbacks. The Chasidic philosophy these men, mostly in their early twenties, study night and day, comes in handy when faced with the ups and downs of reaching Jews living off the map.

For years, they’ve learned: A downturn is a springboard to greater heights. Obstacles challenge you to take a leap. There’s greater meaning in coincidences than serendipity. On Merkos Shlichus, as the 60-year-old program that takes young rabbis around the globe is known, they put those teachings into practice.
So, in hot, dusty Accra, two days before the Seder, when 20 Jewish children showed up, frowning, skeptical moms in tow, for an impromptu matzah baking experience, Rabbi Dovid Nussbaum of Montreal decided his first encounter with the bunch would be delivered in the universal language of sport. Playing a quick soccer game with the kids while they waited for the flour and water supplies, fixins for unleavened bread, Rabbi Nussbaum and the kids broke into a sweat, and broke the ice. Afterward, they baked matzahs, sang Passover songs and even tried the Four Questions.

Once seated at the Seder table with 30 Israeli ex-pats, Rabbi Nussbaum and Rabbi Getzy Markowitz, both 23, were momentarily sent back to square one. Their host, a director of a major Israeli road-building corporation rose to say a few words. He proceeded to lambaste his employees for stalling at roadblocks and not meeting budget goals. He recited spreadsheet numbers, overtime tallies, demanded better performance next quarter, or else, and – without a word about Passover or holiday wishes – sat down.

How to rescue the Seder from morphing into a board meeting? In the director’s words, Rabbi Markowitz found a parallel to the inner meaning of the Exodus. Leaving Egypt is likened to overcoming one’s own personal, spiritual roadblocks.

“Sometimes you have no idea what you are going to answer, and your mouth starts moving and the right words come out,” said Rabbi Markowitz. It happens that way on Merkos Shlichus, especially with a helpful resident Chabad representatives like Rabbi Shlomo and Miriam Bentolila of the Congo offering guidance and support.

The tone set, a night of questions, answers,  and real discussion was underway.

At 1:00 a.m., Samuel, an engineer raised on a Marxist kibbutz, who told the rabbis initially to “keep it quick,”  offered that “for the first time I’ve had so many of my questions about Judaism answered, I am leaving here forced to think.”

On his way out, Ido, a twelve year old who read the ‘Wise Son’ portion at the Seder, told his mother, “If you want me to have a bar mitzvah next year, I want these guys to be my rabbis.”

Second Seder was an hour and a half walk away, in 100-degree steamy heat to University of Ghana in Legon. “Even if only two people showed up, they would be two people who would not have matzah or a Seder without us,” said Rabbi Markowitz.

Greeted by five times their estimate, the group of students at the Seder was so touched by the rabbis’ dedication that no preliminaries were needed to get into the Passover spirit. When the rabbis fired up their computers after Passover, they received a message. Four of the graduate students at the Seder decided to light Shabbat candles as a group each Friday night.

And that was some of what transpired over Passover in far away Ghana. Multiply that by 150 more cities and by hundreds more young Chabad shluchim who dedicated Passover to reaching some of the world’s least affiliated Jews, and the inspiration becomes positively illuminating.

Related Articles
View All
From Ethiopia to Estonia, From Pulpit to Potatoes, Chabad Students Toil for the Seder
(lubavitch.com/lns) Two hundred eighty three young rabbis updated their U.S. passports for their Passover assignments that will see them producing Seders in Goa, India; Varna,…
Seoul’s Jews Invited to First Civilian Passover Seder
(lubavitch.com) South Korea’s Jews are responding to colorful invites from their new Chabad representatives announcing the first civilian Passover Seder there. Until now they had only one option—to…
Features
Remembering The Struggle for Russian Jewry
Ninety-three years ago today, Rabbi Joseph I. Schneersohn (1880-1950), sixth Lubavitcher Rebbe, and the leader of Russian Jewry at the time, was freed from Soviet-imposed…
Features
Wordsmith: Tamim
The tamim is unflappable. He does not sway with the winds of change, nor bend to meet the expectations of others. He is a simple…
Features
Remembering Rebbetzin Chana: Jewish Feminine Role Model
Rebbetzin Chana Schneerson, a feminine role model of Jewish activism and proponent of Jewish scholarship, mother of the Lubavitcher Rebbe and wife of Rabbi Levi…
Features
Defying Religious Stereotypes on Israel’s College Campuses
By the time Zehavit Mohager, a psychology student, began her studies at the University of Haifa at age 23, she had already completed her army…
Get Inspiration to your inbox!
Newsletter
Join our weekly newsletter for inspiration and updates
Donate
Find Your Local Chabad Center
Chabad
About Chabad-Lubavitch
About Chabad Lubavitch
The Rebbe
Headquarters
Magazine
Magazine
News
News & Updates
In The Media
Impact
Social and Humanitarian
Social and Humanitarian
Education
Education
Community
Community