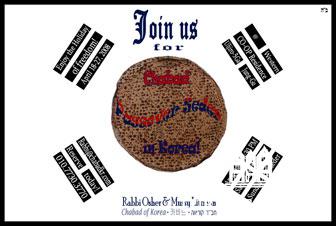 Until now they had only one option—to join the Seder at the US Army base there. With only 250 Jews living in the country, there wasn't much more happening on the Jewish scene.

But with the recent arrival of Rabbi Osher and Mussia Litzman, many are welcoming the option to join the Chabad seder at the Western Co-op Residence, a local hotel, for the Seder.

The invites are designed like the Korean flag, with details about the Seder corresponding to the flag's design. So far, says Rabbi Litzman, he’s received 100 rsvps for the Seder. Among them are Jewish soldiers at US Army bases, a Jewish business people living in Seoul.

“We received scores of responses from Jewish residents in Seoul who learned about arrival here from the local media,” he tells Lubavitch.com.

The news was heartwarming to them, he says, especially as “some of them who’ve been living in South Korea for a long time have still not met another Jew here.

Until the arrival of the Litzmans, Seoul, South Korea’s largest city and one of the most populous cities in the world, was one of the last major cities in Asia that did not have full time Chabad representatives.