From Ethiopia to Estonia, From Pulpit to Potatoes, Chabad Students Toil for the Seder 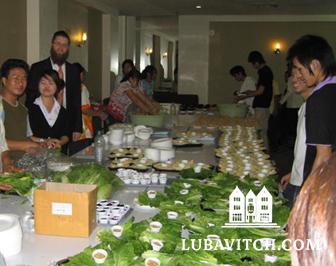 Getting ready for the Seder last year in Chiang Mai.

(lubavitch.com/lns) Two hundred eighty three young rabbis updated their U.S. passports for their Passover assignments that will see them producing Seders in Goa, India; Varna, Bulgaria; Dresden, Germany, and 150 cities in between and beyond. (More rabbinical students are traveling from Israel and other Chabad yeshivas.)

Funding for the six decade old Merkos Shlichus program, as the community enrichment program is known, is a joint venture between Chabad-Lubavitch’s central education and community outreach division and the local communities. In central Africa, for instance, Chabad representatives Rabbi Shlomo and Miriam Bentolila work year round from their home Kinshasa to support the work the young men will do in Tanzania, Nambia, Ghana, Nigeria, Angola and – for the first time – Ethiopia.

Rising prices, sweeping every category from fuel prices to food to matzah, have pumped up the budget needed to support the program. In far off places where food supplies are scarce and kosher food unheard of, the young men will stash everything from frozen chicken to horseradish roots for the Seder’s bitter herbs into their luggage.

In Israeli backpacker haunts in Nepal, Brazil, and India, they’ll help set Seder tables for up to 2,000. They’ll reach the masses in hopes of touching a single life, like the one that changed last year when Getzy Markowitz, 23, leaped off a tuk-tuk taxi in Chiang Mai, Thailand, to find a souvenir for his sister Rosie who collects Starbucks mugs from around the world.

After a long morning urging Israeli tourists in the resort town to join 500 Jews at the Chabad Seder that evening at the Imperial Hotel, Markowitz and his Merkos Shlichus partner Dovid Nussbaum strolled into Starbucks when they heard rapid-fire Hebrew. Six-foot-four Markowitz described the Seder to the family of five. The father brushed them off, but the youngest girl, named Orit, told Markowitz that it was her birthday.

“Wouldn’t you love to celebrate your birthday with 500 Jewish people at the Seder?” Markowitz offered.
No firm commitments were made, but that night Orit and her family showed up. And the birthday girl sang the “Mah Nishtana” –the Four Questions from the stage.

“They gave their daughter the best birthday gift ever: her birthright,” Markowitz said.
Merkos Shlichus participants can rattle off encounters like these, unplanned meetings that lead to Jewish connections, one after the other, no matter – it seems – where they are sent. “Merkos Shluchim are needed everywhere,” Rabbi Bentolila told Lubavitch.com. “In each place they go, they are able to revive Jews.”

Often the young rabbis arrive just when they were needed most. Last year, in Accra, Ghana, two of them helped Pinchas Ben Elazar HaCohen put on tefillin. A Holocaust survivor living in Israel, HaCohen lost his only daughter in a bus bombing and his wife to a heart attack a few weeks later. He had severed all his ties to Judaism save one: putting on tefillin. But that morning, HaCohen had left his tefillin behind.

In Nigeria, last year, Rabbi Yaacov Behrman, 25, was shopping for vegetables in a bustling marketplace. A young woman stopped to ask a very technical question regarding the use of new dishes in a kosher home. Startled, because the question went well beyond the usual beginner repertoire, Behrman asked about her story. A divorcee from Bnei Brak, Israel, the woman had married a Nigerian but was raising her children as Jews. Behrman helped her hang up mezuzahs and brought her a package of frozen kosher meat. He also put her in touch with Rabbi Bentolila, so the fleeting encounter could develop into a more lasting connection with Judaism.

Given the wandering Jew phenomenon, and the business climate in places like Africa and the Far East, it is perhaps not remarkable that the young men – all sporting an unmistakable rabbi look with white shirt, black pants, hat and beard – find Jewish people wherever they go. But what is remarkable is the depth of their conversations with Jews who purposely moved far, far, far away from anything that resembles a Jewish community.

A septuagenarian ex-South African Jewish, self proclaimed atheist living in Thailand found herself questioning Markowitz, “How is it that I am even listening to you? You are too young.”

Fruit from the spur of the moment conversations is varied. Israeli businessmen living in Abuja, Nigeria, whose cohesiveness as a group was augmented by years of Merkos Shlichus Seders purchased a Torah scroll and host weekly Shabbat services. Other young rabbis carry on regular Jewish study with their contacts via email or through Skype web conferencing. Individual changes, the young men who decide to date Jewish women because of their conversations, the women who begin lighting Shabbat candles after a meaningful post-Seder discussion, have a butterfly effect on the Jewish future.

The young rabbis are well aware that going on Merkos Shlichus to a location where there are very few Jews, means there are that many more non-Jewish people observing them. They fill their pockets with fruit to give to young children begging on the streets. Taxi drivers are tipped extra.

On Rosh Hashanah in Addis Ababa, Ethiopia, two boys asked Rabbi Behrman for money. “I’m sorry. I don’t carry money on my holiday, but come to my hotel on Sunday and I’ll tip you then,” he said. They followed Rabbi Behrman down the street, discussing Harry Potter with him.

Before they separated, the boys asked Rabbi Behrman if he was Muslim or from the Ethiopian Orthodox Church. The answer, “I’m Jewish” brought looks of shock and bewilderment.

“You can’t be Jewish. Jews are evil,” one boy ventured.

And with that, a little fissure formed in two young boys’ preconceived notions of what Jewish people are.