A “Tent of Peace” On the Korean Peninsula 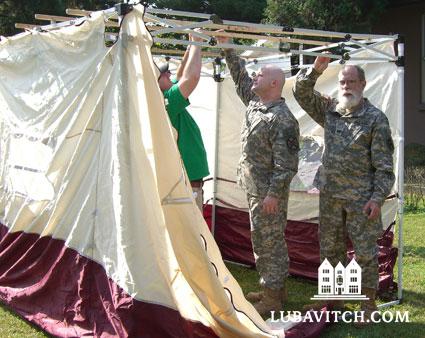 US Chaplain (Col.) Rabbi Jacob Glodstein arranges for the construction of a Sukkah at the Yongsan Military Base. (photo for Lubavitch.com)

North Korea’s Kim Jung II may be detonating nukes and playing war games with the international community, but Jewish U.S. troops in South Korea are not in duck-and-cover mode. With Uncle Sam’s blessing, they’re out in the sukkah Chaplain (Col.) Jacob Goldstein built on the Yongsan Military Base in Seoul.

Plans had been to construct the nylon and aluminum frame sukkah booth in the DMZ. Just before Yom Kippur, days before the North Korean dictator boasted of an underground nuclear test, plans changed. By phone with Lubavitch.com, Goldstein kept mum on the shift in location except for explaining, “We decided this base is much better, more centrally located, and people can stay overnight here.”

Sukkot guests – military personnel based at the DMZ or elsewhere in the region – are comfortably accommodated in the base’s 45-bed spiritual retreat center. Over Rosh Hashannah, 130 Jews prayed together on base. Israel’s Ambassador to South Korea Yigal Caspi and American Ambassador Alexander Vershbow joined in the prayers as did six Jewish Fulbright scholars studying in Korea, and a professor who pinch-hit as cantor. A Canadian Jewish business traveler arrived at the last minute and received military clearance to attend on base after locating Yongsan’s High Holiday services through the Jewish OnStar, more commonly known as the worldwide Chabad-Lubavitch network.

U.S. military presence in South Korea dates back to the 50s, and decades of experience with Jewish religious needs shows. A long, thin Fedex box arrived at Yongsan before Sukkot containing, a lulav palm frond and etrog citron, so the soldiers and airmen wouldn’t miss out on holiday necessities. Frozen kosher chickens and “a huge stash of kosher food” lurk in the commissary, said Chaplain Goldstein. For a time, Chaplain Goldstein pondered how he’d explain the rigors and strictures of koshering a kitchen to a South Korean. He need not have worried. Mr. Kay, base kitchen manager for the past 33 years, was a veteran of the hurly-burly that koshering entailed. He had enormous pots and rocks for koshering ovens at the ready. No pabulum squeezed from old kosher MRE’s for Jews at Yongsan; Mr. Kay, a Korean national, catered full kosher holiday meals.

“People are amazed the military spent money so that they will be covered for the holidays,” said Chaplain Goldstein. The U.S. government is true to its conviction that “it is the nation’s responsibility to care for its citizens in the service no matter what they believe.”

Ironically, Chaplain Goldstein’s temporary posting in Korea to cover the gap between long-term chaplains at the base was supposed to be a quiet one. He’s donned his camo-yarmulke in hotspots from Bosnia to Iraq to Afghanistan to Ground Zero. Just before Korea snatched headlines with nuke rattling, Chaplain Goldstein suspects he became a known entity to the North Koreans. On a day trip to the DMZ, Chaplain Goldstein was trucked right up to the booths at the southern border to offer moral support and spiritual guidance to Jews in fatigues. During a briefing, he was informed that the North Korean soldiers would snap photos of him, as they did of every face that appeared at the DMZ. The military commanders “were convinced I threw the North Koreans off guard. Never had they seen someone in my rank with a beard.” Just imagine if they had seen Jews armed with palm fronds emerging from a bamboo-roofed hut.