A Measure of Jewish Pride: Germany’s Largest Mezuzah Gets Notice 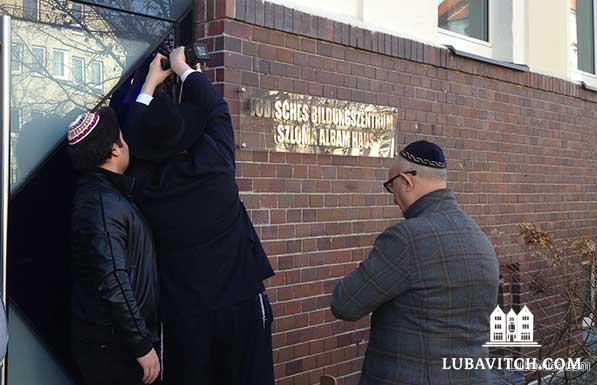 Affixing “Germany’s largest Mezuzah” on the Chabad center in Berlin.

In a bold display of Jewish pride, Chabad of Berlin installed what may well be the largest mezuzah in Germany. “The reaction to anti-Semitism may be to hide our identity. But we need to wear our Judaism proudly,” says Rabbi Yehudah Tiechtel, executive director of Chabad in Berlin and rabbi of the city’s Jewish community.

Measuring one and a half feet long, the mezuzah was affixed last month on the doorpost of the Chabad synagogue—a facility noted for its outstanding architectural design—following a visit by Kirsten Lange, Director General of Germany’s Ministry of Justice. Lange declared his solidarity with his country’s Jews.

“Today I stand with the Jewish community in Germany. I say loud and clear, whoever attacks Jewish centers or Jewish people is attacking Germany,” said Lange during his visit.

Berlin has the largest Jewish community in Germany, with the low estimates placing the number at around 10,000 Jews. The community, according to the German daily Berliner Zeitung, is feeling unease after the events in Paris.

Hans-Georg Maaßen, President of the Germany Federal Office for the Protection of the Constitution, told Berlin’s Jewish Youth Congress that there are no specific threats. Yet according to reports there is clearly a rise in anti-Semitism, especially by Arab youth in the local public schools.

“While many thought that after Auschwitz, there would be no anti-Semitism, in some people this hatred is deep rooted,” the rabbi says. “The question is how to respond. Hiding our Judaism will not diminish their hatred.” Instead, Tiechtel proposes building bridges of understanding, and has taken an active role himself, marking the recent Kristallnacht day with local Muslims.

The large mezuzah, he hopes, will convey the message of Jewish pride, even, or especially, in the face of anti-Semitism. “We can and must be vigilant, there needs to be more police protection. Yet, if we are ashamed of being Jewish, this will only cause our opponents to feel that they are triumphant. We must fight hate with steadfast determination and never cower or hide our Judaism.”

Related Articles
View All
Muslims Mark Kristallnacht in Berlin
In a departure from convention, a group of Muslims youth participated at a memorial in Berlin marking the 76th year of Kristallnacht.
Chabad Opens Traditional Jewish Elementary School in Berlin–A First Since Holocaust
In a villa where Nazi officers once unwound from their barbaric slaughter of Europe’s Jewish population, the eager voices of thirty-five Jewish children will soon…
Berlin Jews, Germany’s Foreign Minister, Celebrate Opening of New Jewish Community Center
German Foreign Minister Frank-Walter Steinmeier was among the distinguished guests  who participated at the formal opening of Berlin's new Chabad center earlier today. Rabbinical figures…
Berlin Jews Emerge From the Shadows
Under the sparkle of crystal chandeliers, pink roses and gilded leaves, guests sat riveted Sunday night in a dreamy white tent listening to one community member after another…
Anti-Semitism: Don’t Just Talk, Do Something About It!
“This is our response to anti-semitism,” said Rabbi Yudi Teichtal, speaking to the American delegation to the Berlin Conference on Anti-Semitism. Rabbi Teichtal, Chabad-Lubavitch representative…
News Briefs
Walnut Creek Welcomes New Shluchim
Community Welcomes Shluchim With Flowers And Gifts
News Briefs
Statement By Chabad Lubavitch World Headquarters
Every day that Jews are barred from entering the synagogue by armed guards is an unforgivable violation of the Jewish people!
News Briefs
IL Governor Rauner Joins Chabad Emissaries in Prayer at Western Wall
Illinois Governor Bruce Rauner was joined by Rabbi Avraham Kagan of Lubavitch Chabad of Illinois on a visit to the Western Wall in Jerusalem Tuesday…
News Briefs
Kathmandu Emissary Organizes Rescue on Yom Kippur
It was the night of Yom Kippur, and Rabbi Chezky Lifshitz was not in shul.
Get Inspiration to your inbox!
Newsletter
Join our weekly newsletter for inspiration and updates
Donate
Find Your Local Chabad Center
Subscribe
|
Log In
Chabad
About Chabad-Lubavitch
About Chabad Lubavitch
The Rebbe
Headquarters
Magazine
Magazine
News
News & Updates
In The Media
Impact
Social and Humanitarian
Social and Humanitarian
Education
Education
Community
Community