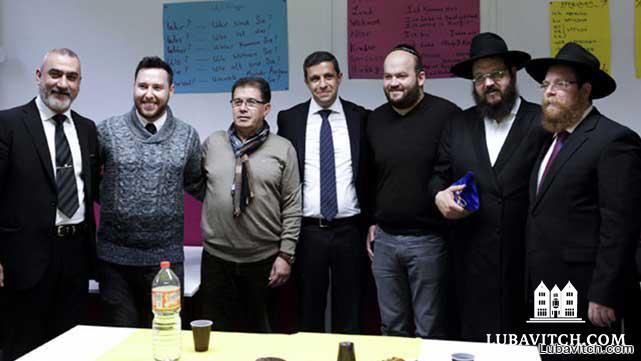 In a departure from convention, a group of Muslims youth participated at a memorial in Berlin marking the 76th year of Kristallnacht. Also known as the “Night of Broken Glass” for the glass storefronts of Jewish businesses and synagogues that were shattered and smashed on November 9 and 10th in 1938, Kristallnacht foretold the coming Holocaust.

Organized by Chabad and K-Spice, the memorial took place last week in the Neukölln neighborhood, home to many Muslims and a place where Jews are often the target of harassment and physical abuse by Muslim youth.

“When the Nazis burned down synagogues and the neighbors did nothing, today everyone understands that this cannot be allowed to ever happen again. Our neighbors need to comprehend that when someone is doing wrong, they need to stand up in protest,” Rabbi Yehudah Teichtel, Chabad representative to Berlin and one of the city’s chief rabbis, told the crowd.

“Jews, Christians and Muslims need to live together in peace, without synagogues or mosques becoming a target of hate, arson or desecration.”

Raed Saleh is a member of Social Democrats political party and Palestinian born Muslim, who has advocated for Holocaust education and aggressive education against anti-Semitism in the city’s school. “There is no place for anti-Semitism in Europe and especially in Berlin,” he said at the memorial.

“In light of what happened in the past, anti-Semitism cannot be a part of German society. For Germans the fall of the Berlin wall happened twenty-five years ago. For Jews, Kristallnacht happened yesterday. The glass is still broken and lying on the edge of the streets.”

Participants urged acceptance and tolerance as the most meaningful memorial.

Related Articles
View All
Chabad Opens Traditional Jewish Elementary School in Berlin–A First Since Holocaust
In a villa where Nazi officers once unwound from their barbaric slaughter of Europe’s Jewish population, the eager voices of thirty-five Jewish children will soon…
Berlin Jews, Germany’s Foreign Minister, Celebrate Opening of New Jewish Community Center
German Foreign Minister Frank-Walter Steinmeier was among the distinguished guests  who participated at the formal opening of Berlin's new Chabad center earlier today. Rabbinical figures…
Berlin Jews Emerge From the Shadows
Under the sparkle of crystal chandeliers, pink roses and gilded leaves, guests sat riveted Sunday night in a dreamy white tent listening to one community member after another…
Anti-Semitism: Don’t Just Talk, Do Something About It!
“This is our response to anti-semitism,” said Rabbi Yudi Teichtal, speaking to the American delegation to the Berlin Conference on Anti-Semitism. Rabbi Teichtal, Chabad-Lubavitch representative…
Yeshiva Trains Rabbis In Berlin
“I have heard of Jews leaving Germany to study abroad, but this is the first I have heard of Jews leaving Israel and the States…
Get Inspiration to your inbox!
Newsletter
Join our weekly newsletter for inspiration and updates
Donate
Find Your Local Chabad Center
Subscribe
|
Log In
Chabad
About Chabad-Lubavitch
About Chabad Lubavitch
The Rebbe
Headquarters
Magazine
Magazine
News
News & Updates
In The Media
Impact
Social and Humanitarian
Social and Humanitarian
Education
Education
Community
Community