Berlin Jews Emerge From the Shadows 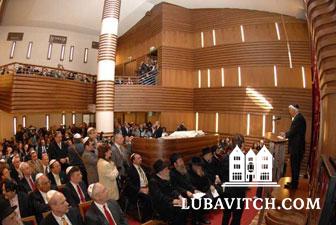 Under the sparkle of crystal chandeliers, pink roses and gilded leaves, guests sat riveted Sunday night in a dreamy white tent listening to one community member after another describe their decision to become involved with the vision of Rabbi Yehuda Teichtal.

The vision turned into spectacular reality, and many echoed German Foreign Minister Frank-Walter Steinmeier's sentiments, who spoke in the sanctuary of Berlin's newly opened Jewish community center earlier Sunday, claiming it "a historic day for Germany."

Guests and speakers–among them ambassadors from some 15 countries and an international list of rabbinical leaders–marveled that Chabad-Lubavitch of Berlin, led by Rabbi Teichtal and his wife Leah, succeeded in all of 11 years to win community-wide support and participation in the creation of a center that would be referred to by local Jews, as "our center."

The $6.8 million Szloma Albam House–the result of private funding, much of it from members of Berlin's Jewish community is thus all the more remarkable. It suggests, as the Foreign Minister said gratefully, that now, 60 years after the Holocaust, Germany has gained the trust of its Jewish population willing to invest in the country.

The new center is celebrated as a place that Berlin's Jews will feel proud to identify with, and will encourage their invovlement in Jewish life–a dramatic shift in attitude for a Jewish population accustomed to keeping a low-profile.

Pedro, a representative of WIZO and a friend highly instrumental in and dedicated to the development of the center, told guests, "At one point I thought this man is a real dreamer.” But i didn’t take long for him to appreciate that Rabbi Tiechtal intends to turn his dream into a vision, and then into a reality.

In a society where Jews kept their identity to themselves, “suddenly, being Jewish became something for everyone to see, and not something to be hidden,” said Pedro, who explained that while he is not observant, he was inspired by Rabbi Tiechtal’s faith in G-d, and in the Lubavitcher Rebbe.

A tour with Rabbi Teichtal  through the 25,000 square foot architectural stunner illuminates the extent that Berlin's Jewish community has invested in their city's Jewish infrastructure, working with Chabad-Lubavitch representatives to step up the pace and quality of Jewish growth.

Designed by renowned architect Sergei Tchoban as a full service Jewish community center, the building inclueds a synagogue, a library, social hall and lecture hall, education center, lounge and conference rooms, all in use already. A rabbinical training yeshiva will also open in the building in October.

Soon to be completed is a mikvah, a kosher restaurant, and a tourist information center.

"I want to give every Jew who comes to Germany a reason to come here," Rabbi Tiechtal told Lubavitch.com.

The center, which also bears the Rohr Family name, will indeed give many a visitor reason to come–if not for a kosher steak, a prayer service or a Talmud class, then for the pleasure of seeing exquisite form and uncompromising function taken to a new level.

Security personnel counted more than 4,000 who came to the street fair outside the new center at Number 6 Munstersche Str. Berlin's Jewish population numbers about 12,000.

The dinner, planned and coordinated by Mrs. Leah Teichtal, a much loved leader in the community who prefers to work behind the scenes, left guests feeling high; many lingered on in the late hours of a cool September night warmed by the spirited joy of the event, long after the dinner was over.

Gideon Joffe, the president of Germany’s Jewish Community who addressed guests earlier in the day, sat late after the dinner with Lubavitch.com.

“To build–out of nothing–an Orthodox community that brings people back to traditional Judaism is great,” he said.

Only 30 percent of Germany’s 13 year old Jewish boys are bar-mitzvahed, said Gideon. He'd like to raise the level to 100 percent.

"Chabad is going to make that happen."

Related Articles
View All
Berlin Jews, Germany’s Foreign Minister, Celebrate Opening of New Jewish Community Center
German Foreign Minister Frank-Walter Steinmeier was among the distinguished guests  who participated at the formal opening of Berlin's new Chabad center earlier today. Rabbinical figures…
Features
Our Most-Read Articles Of 2021
The following were the 10 most-read originally produced articles that published on Lubavitch.com
Features
Should I Let My Kids Go Caroling?
My kids are part of a local choir, can I let them join their friends to go caroling around the neighborhood? If I add some…
Features
Reb Yoel: Reflections On A Chasidic Prodigy
He shaped the contours of Chabad scholarship over the course of seventy years
Features
Remembering Chabad’s Beginnings, 223 Years Ago
It is the date on which, in 1798, Rabbi Schneur Zalman of Liadi, the founder of Chabad Chasidism, was released from Czarist imprisonment.
Get Inspiration to your inbox!
Newsletter
Join our weekly newsletter for inspiration and updates
Donate
Find Your Local Chabad Center
Subscribe
|
Log In
Chabad
About Chabad-Lubavitch
About Chabad Lubavitch
The Rebbe
Headquarters
Magazine
Magazine
News
News & Updates
In The Media
Impact
Social and Humanitarian
Social and Humanitarian
Education
Education
Community
Community