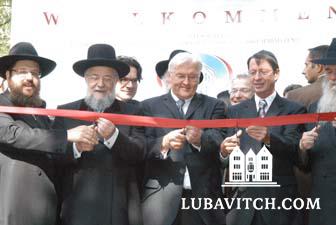 At the ribbon cutting. Photo copyright 2007 by Dani Danieli

German Foreign Minister Frank-Walter Steinmeier was among the distinguished guests  who participated at the formal opening of Berlin's new Chabad center earlier today.

Under the directorship of Rabbi Yehuda Tiechtal, Chabad-Lubavitch representative to Berlin, the Szloma Albam House, as the center is named, will serve as a comprehensive Jewish community center including a synagogue, a library, a kosher restaurant, a tourist information centre and a lecture hall serving Berlin's Jewish population. The center bears the Rohr name, a household name among Chabad-Lubavitch institutions worldwide.

Four thousand attended the festivities following a smaller event in the sanctuary, where a Torah Scroll was completed, and various communal and religious leaders greeted the guests.

Torah scrolls were carried in by visiting rabbis, and the final letters in a new scroll were completed. The sanctuary filled with voices of Ani-Maamin, a traditional Jewish melody often sung by Jews during the Holocaust.

The new Jewish center, promised Rabbi Moshe Kotlarsky, Vice Chairman of the worldwide Chabad-Lubavitch educational division, and himself a son of Holocaust survivors, "will ensure the revival and survival of the Jewish people in Germany."

He spoke of this event as a result of the inspiration by the Lubavitcher Rebbe, who worked tirelessly to restore a living Judaism to Jewish people following the Holocaust, and extolled the new center as a promise in Chabad's general work to draw the young generation into a meaningful and proud Jewish involvement.

Rabbi Lau reflected on this as a dramatic event in his own personal history: "The first time I came to Germany, I came here as a prisoner from Poland."

"I was brought here in a sack on my brother's shoulder because children weren't allowed to survive. And then I was no longer Srulik, but I became Yulik," he said, contrasting his memory of a Germany that murdered its Jews, to one that is now welcoming them and encouraging them to build and thrive on its land.

Driving home the point that the new center must be utilized to restore Jewish life to its full vitality, Rabbi Lau spoke of the many Jews today who nostalgically recall an observant grandfather.

"I want to ask these people, 'now that I know who your grandfather was, can you tell me please, who your grandchildren are. . . "