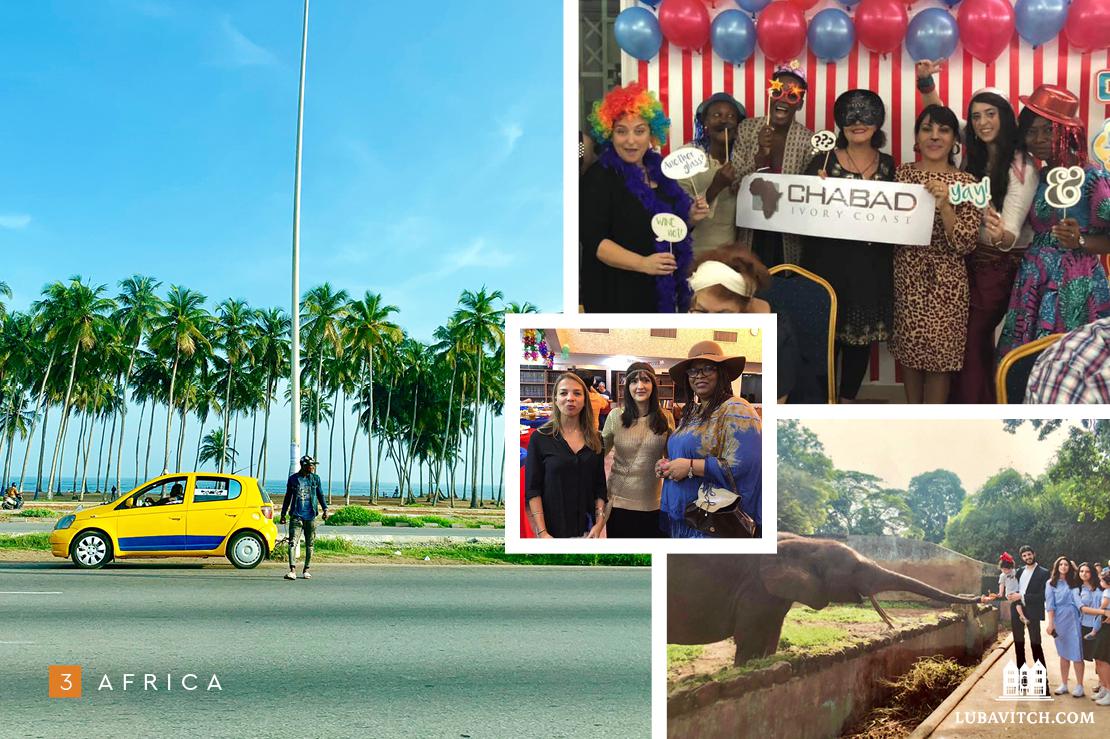 A Family Affair In Africa

This past winter, Debbie Bensaid traveled to her childhood home in Kinshasa to help her parents with their community work. Her mother, Miriam Bentolila, was receiving treatment in Israel, her husband, Rabbi Shlomo, at her side. Debbie, their eldest, brought her husband and two kids to the Democratic Republic of the Congo to keep the Bentolila’s community of thirty years operational.

And that’s when it hit her. “How did my mother do it?” Debbie wonders openly. “The Congo is not family-friendly, it’s undeveloped, it’s very expensive. True, we had an amazing childhood, learning to swim and taking ballet and art lessons. But growing up, I never realized how hard it is to live there.”

These days, Debbie and her husband Rabbi Yerah Bensaid live 2,400 miles northwest of Kinshasa, in Abidjan, the capital of the Ivory Coast. Their community is a transient one, consisting of Israeli and European workers who come for short-term business opportunities. Though it is also a third-world country, Debbie insists that life here is a lot more pleasant compared to the challenges of her childhood. Challenges, she freely admits, she didn’t realize her parents experienced when she was young.

It’s not surprising that Debbie is contemplative these days. Her mother passed away in April at the age of fifty-two. “It was my parents’ happiness, their calm, that made us not affected by the outside chaos,” Debbie explains. Now, she is determined to transmit that same vibe to her own African outpost.

Because of its impermanent nature, the community the Bensaids have been tending since 2018 is very small. “You hear people say, we came here and there were two people at our event and now we have thousands,” muses Debbie. “There’s a focus on big growth. But it’s not like that here. My mother taught me that in Africa we don’t think about numbers, we think about the individual soul. We had two families in our Hebrew school until now, but they moved back, and we have only one student. I could be sad, but I know that one boy is a whole world. Who knows how we can affect his soul?”

Even in her final days, Miriam Bentolila wanted to see pictures of her three students (numbers in the Congo similarly fluctuate) and checked that one of her pupils was keeping up with his reading skills. “She prepared lessons and books for three as if she had dozens of students,” Debbie notes.

When she was a kid, Debbie’s mom actively involved her children in whatever class or program she was organizing. “For her, it wasn’t this is my shlichut (mission) and these are my children. We were her world. And I try to do the same for my kids,” says Debbie. “My four year old helps cook for Shabbat and sets the table for guests. We are a team.”

Raising children in Abidjan is much simpler, declares Debbie. For one, unlike her own childhood which included three civil wars, her children are living in a more peaceful environment and don’t need security guards to leave home. The Ivory Coast has parks, zoos, botanical gardens, bookstores and other family entertainment unheard of in the Congo. There is also accessible kosher food, found on the shelves of French chain stores that have outposts here. Debbie’s pantry boasts 100 bottles of shelf-stable milk. Meat and chicken, brought in suitcases by visiting friends and family, are stored in enormous freezers. “I literally copied my parents and their freezers,” she says.

That’s not the only thing this determined young woman is emulating, much to her mother’s credit.

Related Articles
View All
Africa
New Chabad to Open in Zambia
Rabbi Shlomo Bentolila, Director of Chabad of Central Africa, announced his intent to open a new Chabad center in Zambia in memory of his wife,…
Africa
New Shluchim to Lagos, Nigeria
When Rabbi Mendy and Mazal Sternbach met for the first time, they discovered they had matching stamps on their passports: both had spent time assisting…
Africa
770 Food Packages For Muslim Families
25,000 meals delivered to 770 single-parent Muslim families in Nigeria as Ramadan ends.
Get Inspiration to your inbox!
Newsletter
Join our weekly newsletter for inspiration and updates
Donate
Find Your Local Chabad Center
Subscribe
|
Log In
Chabad
About Chabad-Lubavitch
About Chabad Lubavitch
The Rebbe
Headquarters
Magazine
Magazine
News
News & Updates
In The Media
Impact
Social and Humanitarian
Social and Humanitarian
Education
Education
Community
Community