With no minyan allowed, parents still find away to perform newborn ceremonies 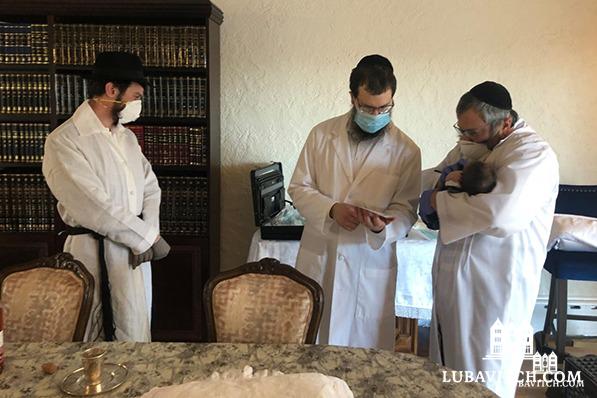 In this multimedia mini-series, we look at Chabad’s response to the effects of the coronavirus pandemic on Jewish life events. In this, part three, we look at the precautions taken while arranging a brit and the creative baby-naming ceremonies being held.

Rabbi Mendel and Chava Mushka Dubov are not new to parenting, but when they welcomed their newborn son last Sunday, they knew his bris (circumcision ceremony) would be unlike the four they had previously made.

New Jersey had already instituted shelter-in-place laws to slow the spread of covid-19, so the couple who lead Chabad of Sussex County would have to hold the ceremony without the company of family, friends, or community. Even family from within the Tristate area wouldn’t attend. That didn’t stop them from celebrating though. They set up a zoom meeting and Facebook live feed and held the bris as if the hundreds of virtual guests were in the Chabad House with them. “Usually a bris is a celebration which includes a festive party so we explained each step and carried out the ceremony as if everyone was there,” Rabbi Mendel said.

Not far from the Dubovs, on Monday, at Chabad of Huntington Village on Long Island, Rabbi Yaakov Yosef and Chaya Raskin held a similarly quarantined bris for their eight-day-old son. Dovid Aryeh, as he was named, is the couple’s fourth child, and second son. They too used zoom technology, which allowed family members from around the world not only to watch, but to participate in the ceremony. From Burlington, Yaakov Yosef’s father, Rabbi Yitzchok Raskin, Chabad representative to the state of Vermont, read a letter written by the Lubavitcher Rebbe conveying blessings to a couple on the day of their sons brit to the “assembled.” From his home in Manchester, England, Chaya’s grandfather, Rabbi Aharon Mordechai Vaisfiche, a kohen, blessed his newborn great-grandson with the priestly blessing. Chaya’s parents, Rabbi Asher and Miriam Vaisfiche, directors of nearby Chabad of Melville and Huntington, were the only guests who joined them in person. Rabbi Asher was honored to name the baby, while standing fifteen feet away.

“It was double chaos—the turmoil that goes with having a newborn was magnified by the precautions we had to take to keep him safe,” said Mendel. At both ceremonies all in attendance including the Mohel and parents wore masks and gloves throughout. All surfaces and implements were carefully sanitized. Under normal circumstances, the parents invite different guests to participate—some by carrying the baby into the room, others with holding the infant during the ceremony and during the naming—at this bris, the parents assumed all those roles to limit the baby’s exposure.

Reflecting on the absence of guests that contributes so much to the joy, Yaakov Yosef said he felt blessed. He pointed to times in Jewish history when people have ensured their sons have a bris, sometimes in clandestine ceremonies, under threat of death. “We were able to have our friends and family join by zoom and we were able to put all our focus on our blessing—a focus that sometimes gets lost in the hubbub of a party,” said Yaakov Yosef.

Mendel also noted a silver lining. “People who wouldn’t normally have been able to join us—either because they would have been at work, or because they’re too far away—participated,” he said.

In fact, a 70-year-old member of Chabad of Huntington Village, who joined the bris virtually, shared with the Raskins that he had attended many bris ceremonies in his lifetime and never had he felt so emotional as at this one. “Especially at a time when there is so much sadness around us people found it especially meaningful to participate in something joyful,” Yaakov Yosef said.

Baby girls also have a naming ceremony according to Jewish law. It is traditional for the baby’s father to be called to the Torah at the first opportunity after her birth where he recites a prayer for healing for the new mother and gives the baby her name. When Rabbi Zalmy and Esther Rader, Chabad representatives who work for Chabad of the Town in Montreal, Canada, welcomed their sixth child, a daughter, on Sunday, they wondered how they would name her. The Torah is read on Shabbat, Monday, Thursday and special days, but  only in the presence of a minyan (quorum of ten). With synagogues around the world shut down and even open-air gatherings of ten banned, where would they find a minyan?

As is common in this age of social media, Zalmy crowd-sourced his family on their WhatsApp group. He quickly got a response from his aunt, Mrs. Lieba Baumgarten, a Chabad representative to Johannesburg, South Africa. The Chevra Kadisha, a Jewish welfare organization in Johannesburg operates a campus where they house and take care of 400 vulnerable individuals. As soon as there was a hint of covid-19 spread in the country, the organization’s CEO decided to lockdown the campus in order to protect the residents. On the campus there is a senior living facility that has its own synagogue. As they are all under quarantine together, their synagogue is still in operation. Word quickly spread and by now, the elderly gentlemen of Sandringham Gardens say kaddish (the mourner’s prayer) daily for over 300 souls whose loved ones—prevented from attending minyanim themselves—have commissioned Sandringham Gardens residents as their kaddish representatives.

Lieba, arranged for her great-niece to be named at Monday morning’s minyan in Sandringham Gardens. By 2 am Montreal time, Rabbi Zalmy and Esther received a video of baby Tzivia’s naming. The story didn’t end there for them though, because soon after, Lieba was contacted by her friend, Mrs. Tzivia Grauman. Tzivia is the head of communications at Chevra Kadisha and when she heard the baby’s name, she had to share her own story.

Forty years ago, when Tzivia was a child, her parents, though not originally Torah-observant, had begun to learn more about their Jewish heritage. At the time Tzivia was known by her English name, Ursula, the name her parents had chosen to resemble that of her grandfather, Hershele. As the family became more observant, the young girl wanted to take on a Jewish name, but didn’t know how to choose one, so she wrote to the Lubavitcher Rebbe asking his advice. She mentioned the origin of her name and that her grandfather’s Hebrew name was Tzvi. The Rebbe suggested she take the name Tzivia, the female version of Tzvi.

Now the Rader’s had picked the same name for their daughter and she couldn’t help, but feel the connection. Because of the lack of minyanim caused by the pandemic, a family across the world in Canada had picked the organization she worked for, to name their baby with the very name with which the Rebbe had blessed her. Compelled to pass on the blessing, she sent a picture of the Rebbe’s response where he had written the name Tzivia in his own hand, to Liebah, who shared it with Zalmy.

“It was unbelievable,” said Zalmy. “It was like the Rebbe had sent a blessing directly to us. Sometimes we see the hand of Divine Providence lean down and touch us. At such a difficult time, to get this divine message is incredible.”

Tzivia Grauman is happy that her forty-year-old story has provided fresh inspiration, but she feels the winners of this story are the gentlemen of the Sandringham Gardens minyan. “It’s like a reciprocal miracle. They feel the young ones are staying home to protect them, and in return they get the honor and privilege of giving the newest members of our people their Jewish names.” Baby Chaim Aryeh Silberstein, whose name was intended to bring life and strength to the world.