Vienna Springs into Action to Take In Ukrainian Students

The Lauder Chabad School in Vienna is going to extreme lengths to accommodate 700 Ukrainian refugee families—free of charge. 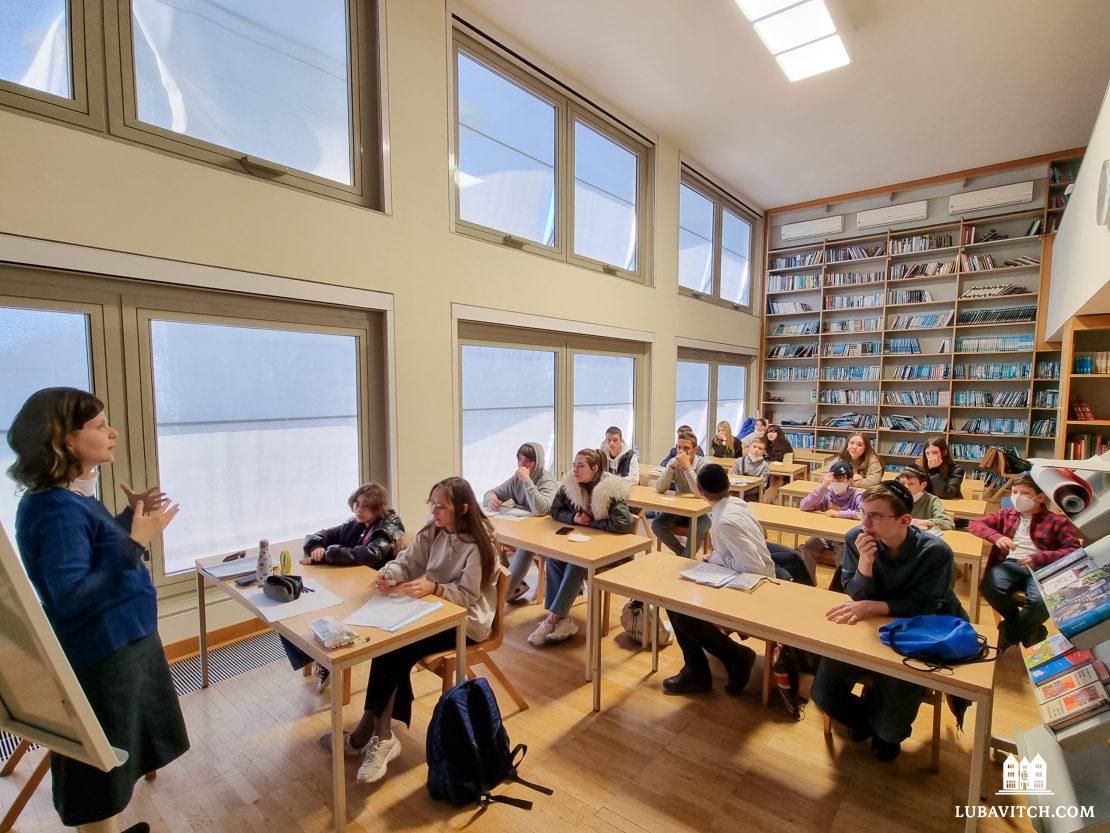 The Lauder Chabad School in Vienna was already at capacity when the first refugees from Ukraine came pouring into town three weeks ago. But seeing the families as they arrived, Vienna’s chief Chabad rabbi and Chairman of the Lauder School, Rabbi Jacob Biderman, didn’t think twice about opening up the school’s doors. “We need to do something,” he told his staff. They began enrolling refugees free of charge.

“The school was already overflowing. We had over 500 students, and every classroom was packed,” said Rabbi Yisroel Wolosow, the school’s principal. So the staff cleared out their offices to make room for the Ukrainian students. One hundred and seven new students have enrolled, from pre-K through 12th grade.

“When we realized the war would not end right away, we needed a more practical solution,” Rabbi Wolosow said. He expects the students to stay at least until the end of the year and has begun transforming an entire floor of a nearby office building into permanent classrooms. The green lawns outside the school are filling up, too. Two temporary classroom trailers are parked there, and a massive party tent is going up to host after-school activities.

“We’re a very organized school; we usually have everything prepared at least a year in advance,” Rabbi Wolosow said. “Now that we have to react rapidly to changes, it has been challenging.” The school quickly hired twenty-nine new staff members, including nine language teachers, seven Jewish studies teachers, kindergarten teachers, several counselors, kitchen staff, and a Russian-speaking psychologist.

When the children first arrived, they didn’t smile much. Rabbi Wolosow met with a group of high-school students when they arrived. “I could see the anxiety in their eyes. They sat there with their heads down, looking dejected,” he said. He decided to take them ice skating and brought along four of their soon-to-be classmates who speak Russian. “A mother came to me after and said it was the first time she had seen her son smile since leaving Ukraine,” he recalls.

The school is trying to make the shift as smooth as possible for the new students. They connect them to local classmates that speak the same language and include them on school-wide trips, such as an upcoming Shabbaton in Prague. “We try to keep them as active as possible,” Rabbi Wolosow says, “After school, we take them bowling or to play soccer. We try to ensure they have all the material things they need, whether it’s clothing, school supplies, or anything they need to feel comfortable.”

Still, it’s hard for many Ukrainian students to focus on their studies after what they’ve seen. “When you have to run away from home or see your city bombed, and your future is uncertain, your head is somewhere else,” Rabbi Wolosow says. The school psychologist has been working overtime. A month later, the children are starting to relax and smile again.

This is the most rapid expansion the staff at the Lauder Chabad School has ever seen, but they have witnessed steady growth for the past four decades. “We founded the school in 1982 with 52 children,” says Mrs. Edla Biderman, Lauder’s director of Jewish studies. In the 90s, it swelled dramatically, and with the support of Mr. Ronald Lauder, its modern campus now hosts a bustling elementary school, a middle school, and a high school with vocational training. A new high school building is currently under construction.

As Vienna’s chief Chabad Rabbi, Rabbi Jacob Biderman oversees the school’s efforts and works with the Jewish Federation to ensure the Ukrainian families get everything they need. But when pressed about his role in helping the refugees, he deflects the credit. “You should talk to Rabbi Kolomoitsev,” he says.

Himself a native of Dnipro, Ukraine, Rabbi Moshe Kolomoitsev operates a Chabad House for Vienna’s Russian-speaking Jews. Since he started getting calls three weeks ago, he’s been working overtime to arrange hotel rooms and apartments for the hundreds of families pouring into Vienna. This Purim, he threw them a grand Purim party, and he now spends his days making sure no family goes hungry.

“The entire Jewish community in Vienna is coming together to help,” Rabbi Kolomoitsev says. “The Bucharian community, the Central community, and the Federation—everyone is stepping up.” One local Jewish businessman owns a hotel and has donated it to the new families. Across town in the 2nd District, the Chabad Haus of Vienna serves hot lunch for two hundred people every single day, under the direction of Rabbi Mordechai Segal. As the war back home drags on, many families are setting themselves up in apartments and tenuously restarting their lives, as they wait for the day when they might return to Ukraine.

When asked how the school is paying for all of this, Rabbi Wolosow replied, “You’re asking a good question.” He’s turning to supporters and hoping for the best. “We’re facing very high expenses, and we’ve been knocking on many doors,” he says, “a small sum from enough people is all it takes. To anyone who can contribute, we’re immensely grateful.”

Finances aside, Rabbi Jacob Biderman says that Chabad emissaries view it as their responsibility to help as much as possible. “Every Chabad Chasid knows our mission,” he says. He refers to the example of the Lubavitcher Rebbe’s mother, Rebbetzin Chana Shneerson. “In World War One, when thousands of Jewish refugees fled to Yekaterinoslav, the Rebbe watched his mother work tirelessly to help in every way she could,” he says. “The Rebbe taught us to follow her example.”

You can support the relief efforts of the Chabad Lauder School via Zelle at friendsoflbs@gmail.com or via wire transfer (details below).