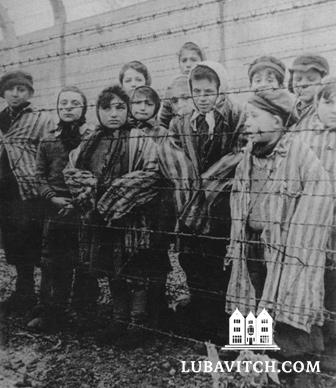 Child survivors of the Holocaust filmed during the liberation of Auschwitz concentration camp by the Red Army, January, 1945.

(lubavitch.com) The Vatican responded this week to a request from the Yad L’Achim organization for action on “hidden Jewish children” of the Holocaust. Archbishop Antonio Franco’s written response, the Vatican’s first official acknowledgement of the issue, called it a “very delicate” and “complex” matter on which the Pope had already taken some action.

Franco said he was unaware of all the details but pledged to “provide more precise information and see if an appeal like the one you propose could be made.”

In a letter written to Pope Benedict prior to his visit to Israel two months ago, the anti-missionary and anti-assimilation organization’s director and Chabad Rabbi Shalom David Lifshitz implore the Pope to intervene. He called on the Pope to order church members to reveal to Holocaust orphans their Jewish past and provide them with accurate information concerning their families.

According to Yad L’Achim, thousands of Jewish children were left with Christian monasteries and families by their Jewish parents during the Holocaust to survive the war. Hundreds of these children, however, were never claimed, returned or told of their Jewish background.