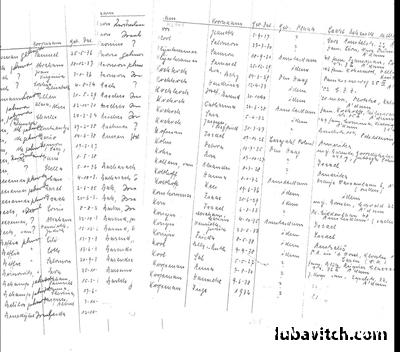 A list of names of Jewish children given up to non-Jewish homes by their parents during the Holocaust.

All News
By Zalman Nelson , Israel

(lubavitch.com) Pope Benedict XVI’s scheduled visit to Israel May 11-15 is eliciting mixed reactions among Israelis. But Chabad Rabbi Shalom Dov Lifshitz hopes the visit will help him in his efforts to save lost souls.
Lifshitz is director of Yad L’Achim, the Israel based anti-missionary organization. In advance of the papal visit, Rabbi Lifshitz sent a letter to the Pontiff’s office calling for his support and help in revealing the identities of Holocaust orphan children who were given up to Christian families.

“I wanted to use the opportunity to draw attention to this pressing issue,” Lifshitz told lubavitch.com about his motivation in writing the Pope.

Known for its work saving Jews from missionaries and Jewish children of Arab men who want to integrate in the Jewish community, Yad L’Achim began collecting information and searching for missing Holocaust orphans about five years ago. “As our activities in other areas helping Jews became more known, people began sending us information and turning to us for help finding family members,” said Lifshitz.
“We began collecting names, information and stories, and were surprised to discover that the issue wasn’t getting the attention it deserved. Between that and the Lubavitcher Rebbe’s exhortations that we must work to find Jews lost to their heritage, we decided to get involved.”
One woman, who shared her story with Rabbi Lifshitz on condition of anonymity, said she was raised as a Catholic in Holland and later in life developed a desire to convert to Judaism. Related Lifshitz, “She told me that she went to the states many years ago to meet with the Rebbe and discuss her conversion. The Rebbe asked her why she needed to convert, she might already be Jewish.

“The woman was confused by the Rebbe’s comment, but went back and pressed her mother for more information, who then finally revealed that she was Jewish. She had concealed her true identity, living as a Catholic since the Holocaust.”
According to Lifshitz’s rough estimates based on a 2003 fact finding trip to France and Holland, and discussions with rabbis, community leaders and historians in Europe, thousands of Jewish children were placed by their parents in monasteries or with Christian families during the Holocaust, to be reclaimed after the war. Many of their parents never survived.
“Small agencies popped up after the war all over Europe in an effort to find children who were stashed away. From those initial efforts there are bits and pieces of lists. Minimally, we need the names. In general though, I didn’t get a lot of cooperation for municipalities, archives or churches. It’s a big job that requires a full time office with team of researchers and coordination across Europe,” said Lifshitz.

“Those hidden children would today be at the youngest, in their mid 60s. Many have no clue that they are Jewish. Some are married to non-Jews and have raised children and grandchildren as Christians. It’s very challenging,” said Lifshitz.

Another challenge lies in the fact that many of the Holocaust survivors who worked on the original lists have already passed away, their knowledge gone with them.

Recently, a survivor from Holland gave Yad L’Achim a list of over 2,000 names of children who were handed over to Catholic families and institutions to hide them from the Nazis. Because a  coordinated effort has been lacking, says Lifshitz, actual discoveries of Holocaust orphans, or their children, have been rare, but positive.
Asked how he broaches this sensitive issue with these people who’ve lived into their 70s assuming they knew who they were, Lifshitz says he treads carefully. “Usually, we’ll ask them if they want to know more about some of their extended family members whom we have discovered. Then, from there, I slowly move to the subject of their being Jewish. It’s a sensitive issue.”
Lifshitz said he is hoping to get support from the Rabbinical Center of Europe and together launch an agency to find the lost Jews.
Some, like the woman from Holland, find themselves.
Lifshitz share a recent conversation he had with a woman he met in Israel. “She grew up in Holland not knowing she was Jewish. Her introduction to Jews came when she was a schoolgirl and met a student who identified herself as Jewish. When she asked her classmate what a Jew is, she was told, ‘Jews are people who go to synagogue, pray and ask for things from God.’”
The girl escorted her to a nearby synagogue where congregants were praying. She told me,” relays Lifshitz, “that she remembers sitting in the women’s section for a long time, watching the congregants in total fascination. Her mother was worried when she didn’t come home in time, and went out looking for her.”
When she found her in the synagogue and asked for an explanation, the girl could only say that she would like to pray like Jews do.  As it turns out, Lifshitz continues, the mother admitted that she was hidden by her parents with Christians during the war, along with the grandmother’s marriage ketuba so she would always remember her Jewish heritage.”
Besides Jewish parents who perished in the war and never claimed their children, many Christian families, on instructions from the Vatican, refused to return children. According to recent reports, a letter from the archives of the Catholic Church in France from Pope Pius XII to his representative in Paris on November 20, 1946 shows that he ordered Jewish children who were baptized during the Holocaust not to be returned to their parents.
“If the children were given over to the church by their parents and the parents are now requesting they be returned, they can be returned as long as the children were never baptized,” explains the letter issued with the full power of the Pope’s office and believed to have been accepted throughout Europe as common practice.
Yad L’Achim’s direct appeals to the queen of Holland and leaders in France and England for assistance were met with promises to use their influence and call on local churches to reveal the names of Jews that are hidden in their archives.
“We are trying through many different channels to find them,” said Lifshitz.
In his latest effort, the letter to Pope Benedict XVI, he asked the pontiff to declare that all those who follow him must reveal the truth to children. “The continued silence on this sensitive topic will eternalize the Jewish nation’s suffering, and the triumph of the Nazi objective,” he writes.

“As you prepare for your historic visit to the Land of Israel,” the letter reads, “we turn to you from the depths of our hearts and souls, in light of the story that shocks every Jewish heart regarding the Holocaust orphans left by their holy parents with Christian families with the express purpose of returning them to their Jewish families. However, to our great sorrow, anguish, and disappointment, the adoptive families refuse to tell the children of the holy martyrs of their background, and thus prevent them from returning to the Jewish People.”
A gesture by the Pope, says Lifshitz would be very significant. “Not returning the children is like a continuation of the Holocaust. The visit to Israel is a unique opportunity turn the page on this chapter, and would be meaningful to the entire Jewish People.”
Rabbi Lifshitz said Yad L’Achim received specific acknowledgment of their letter from a director at the Vatican.
Regardless of the Pope’s decision, Lifshitz says he won’t rest until they reach every lost Jewish child. “Our motivation is simple. The Lubavitcher Rebbe said that the souls of their parents have no rest all the while their kids are unaware of their Jewish identity.”