Upscale and Kosher in Siberia 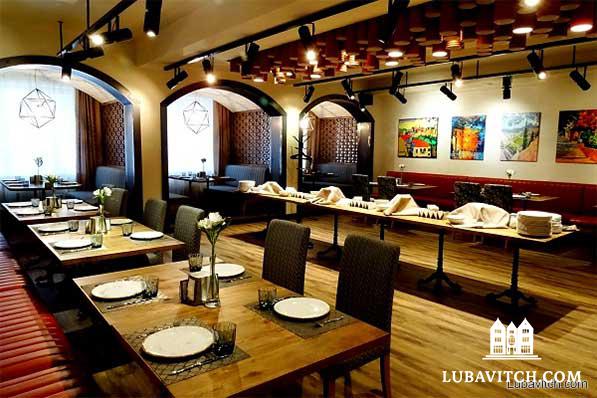 If he were alive today, Moshe Vishedsky would be incredulous. A pious Chabad Chasid, he suffered ten punishing years in a Siberian labor camp with a daily ration of hard bread and diluted soup. The notion that his grandchildren would eventually be welcoming guests and patrons to an upscale kosher restaurant in Novosibirsk was most likely not even a fantasy.

In 1949, Vishedsky was sentenced to hard labor by Soviet authorities for his clandestine activities promoting Jewish life through the underground Chabad-Lubavitch school network. And last month his grandson, Rabbi Zalman Zaklos and his wife Miriam, Chabad representatives in the Siberian city of Novosibirsk, inaugurated the city’s first kosher restaurant.

“I find inspiration in my mission from my grandfather who endured so much here in the gulag,” says Zaklos, who serves as the city’s chief rabbi. But, he offers humorously, he’s got one over his grandfather: So far, he’s done five more years in this frozen city, where and his wife now count 15 years.

On a more introspective note, Zaklos reflects on the price his grandfather paid to sustain and transmit yiddishkeit. “He must have suffered terribly here.” The cold is so bad, he offers, “that locals say that if you want to warm up, go into a freezer.”

But today, the couple is free to share the warmth of community, of spiritual life. And they openly provide material support to those in need, making life altogether livable here.

Zaklos’s uncle, Ben Zion Vishedsky, visited his nephew earlier this year, from his home in Kfar Chabad, Israel. “My father was exiled to Siberia for keeping Judaism. In the very place he was jailed for teaching Jews about their traditions, his grandchildren continue his legacy as Chabad representatives.”

The Zakloses have been reaching out to the area’s 20,000 local Jews—many whose parents and grandparents ended up here during communism. More than 25% of them are actively engaged in Jewish life.

“It is important for locals to have a decent restaurant to meet other Jews,” Zaklos says. “When Jews meet over lunch or dinner, they learn that they are not keeping Jewish tradition alone.”

The restaurant’s menu offers fish, poultry and beef dishes. Prices are competitive, thanks to subsidies by the Jewish center, making eating out at the kosher venue an attractive option.

Related Articles
View All
Kosher Food Online In Moscow
(fjc.ru) Moscow’s renowned Kosher Market.ru food store has launched an exciting new project that is certain to be a big hit with local Jews and…
Thawing Out in Winnipeg’s New Kosher Café
It is well below freezing outside, but inside BerMax Caffé + Bistro, patrons are sipping hot soup and lattes, enjoying a rare Winnipeg experience: kosher…
Tokyo, Japan, Gets Its First Kosher Restaurant
In a country where baba ghanoush, a Middle-Eastern favorite made of eggplant and mayonnaise or tahini is hard to come by, Chabad of Tokyo is…
Only Kosher Eatery Opens in Western Ukraine
With a menu offering five salads, a variety of soups, breads and meats, the only kosher restaurant in Western Ukraine opened last week in the…
Popular St. Petersburg Restaurant Goes Kosher
Mikhail Mirilashvili of St. Petersburg sponsored the switch-over from non-kosher to strictly kosher, of the city’s popular 7:40 restaurant.According to the restaurant’s proprietor, Abram Israelashvili,…
Get Inspiration to your inbox!
Newsletter
Join our weekly newsletter for inspiration and updates
Donate
Find Your Local Chabad Center
Subscribe
|
Log In
Chabad
About Chabad-Lubavitch
About Chabad Lubavitch
The Rebbe
Headquarters
Magazine
Magazine
News
News & Updates
In The Media
Impact
Social and Humanitarian
Social and Humanitarian
Education
Education
Community
Community