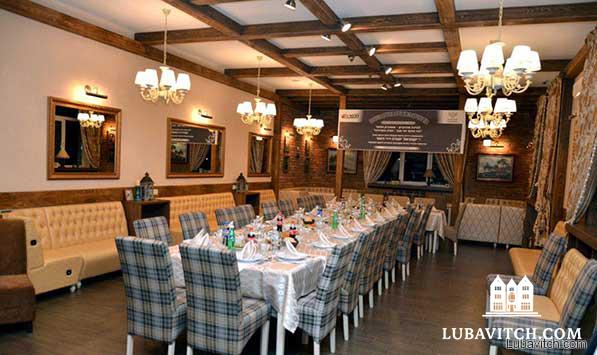 With a menu offering five salads, a variety of soups, breads and meats, the only kosher restaurant in Western Ukraine opened last week in the city of Zhitomir. Philanthropist George Rohr, on a visit to the local Jewish community, affixed a Mezuzah on the door to the restaurant that could comfortable seat sixty.

Situated on the 30 acre Ohr Avner Chabad Educational Village, the new restaurant is an exciting development for the local Jewish community and regular visitors from abroad. Home to a synagogue, Jewish day school, two mikvahs and an orphanage, the village, says Rabbi Zalman Bukiet, administrator of the campus, “is the perfect setting for a restaurant and completes the Jewish community.”

For Jews living in Western Ukraine, until last week, making a kosher event was difficult. “The food was made at home or in borrowed kitchens at the school, where it would need to be made after school hours,” says Rabbi Avraham Daitsh, a local Chabad representative. “It discouraged many from making their events kosher.” The new restaurant will change that.

Thankfully, the city has been spared the violence in Ukraine, but it is in financial trouble, a factor that was considered when planning the new restaurant. “While visitors to the city could afford to pay in full for their meals, many locals who would eat out at non-kosher restaurants, will now enjoy the discount offered to Jewish community members, making eating at a kosher establishment affordable and preferable.”

Children from the local Chabad schools and some thirty Chabad representatives from Western Ukraine came to celebrate the restaurant’s opening.

Rabbi Wilhelm presented Mr. Rohr with a Hebrew letter in cast lead from the famed Slavuta printing press. Slavuta, a nearby city, housed the Jewish press, most known for its printing, in the 1800’s, of several editions of a magnificent Talmud.

“It is very emotional for me to see first-hand what the shluchim are doing in Ukraine,” Mr. Rohr said, adding that he never imagined he’d be eating in a fine restaurant in Western Ukraine.

“I have the merit to be a part of all that you are doing. You do not need to tell me thank you, I need to tell you thank you for letting me partner with you.”

Related Articles
View All
Despite Economic Woes, Ohr Avner Network Thrives
(lubavitch.com) On September 1, 2009, 14,000 students in the Ohr Avner school system of the Former Soviet Union lined up for first bell.
After 70 Years, Torah Scrolls Find Their Rightful Place
The relationship between the People of the Book and the Book has few parallels anywhere outside of Judaism. The Torah is said to be the…
Project Launched to Preserve Jewish Graves in Ukraine
Use the preview site to make sure the text you enter here fits.
Get Inspiration to your inbox!
Newsletter
Join our weekly newsletter for inspiration and updates
Donate
Find Your Local Chabad Center
Subscribe
|
Log In
Chabad
About Chabad-Lubavitch
About Chabad Lubavitch
The Rebbe
Headquarters
Magazine
Magazine
News
News & Updates
In The Media
Impact
Social and Humanitarian
Social and Humanitarian
Education
Education
Community
Community