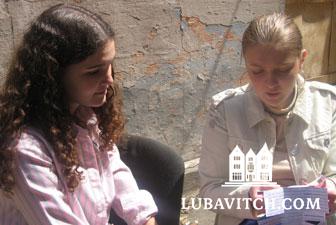 (lubavitch.com/LNS) Maria Karetina, 23, lives in Vladivostok, Russia. Since completing university last year, she has been working as a French-English translator for a large firm. Until last month, she was engaged to a non-Jew, and could have well been the poster girl for assimilation trends across the Former Soviet Union.

But three months ago Karetina joined the STARS learning program. That’s when a new circle of friends opened up to her. Jewish ones.

"Unfortunately, before I attended STARS I had no Jewish friends," she tells Lubavitch.com.

University students throughout the CIS work as waiters or clerks in order to pay their bills. These environments do nothing to quell the steady rise of assimilation and intermarriage.

Studying the problem, two local philanthropists, Lev Leviev and Eli Horn saw a correlation with the steadily aging demographic they found in synagogues, typically filled with people over the age of 70. They needed a way to bring in a younger crowd, if the current Jewish renaissance would continue.

With the establishment of STARS in late 2005, young Jews have been giving up waiting on tables for studying Torah. At least 90 of them have married Jewish, and younger faces are showing up in the synagogue pews.

STARS was developed as a Jewish study program in which young adults commit to study for five hours a week, in exchange for a monthly stipend, the equivalent of what they would earn in other employment. The program creates a positive Jewish environment that allows students to do something for their souls and their wallets.

According to STARS program director Rabbi Schneur Zalman Lider, who directs the program out of Moscow, it brings Jewish life to these youth through serious Torah study, “and not only Jewish events and parties.”

Today, 5000 STARS students study in 95 cities and 12 countries in the region. The main objective of the program says Rabbi Lider “is for every Jewish youth in the CIS to be connected to the Jewish community and build their Jewish identity.”

In Dnepropetrovsk, Ukraine itself, 30 young people have met their soul mates through STARS. Chief Rabbi of Dnepropetrovsk and director of Chabad activities there, Rabbi Shmuel Kaminetzki says the program  attracts 300 (halachically) Jewish youth in the city, many with little or no religious background. Ranging in age from 16 to 27, the students create friendships and community as “they devote themselves to serious study.

Avrohom Gurevych savors the course precisely because of the friendships he has made with the 120 Jewish students in his city. Mr. Gurevych, 17, is originally from Izmail, Ukraine where he first heard of STARS. When he moved to Odessa for university, he joined their local chapter. "I like it because I am interested in the traditions of Jews, and because I have a lot of friends there," Mr. Gurevych explains. He particularly enjoys the classes about Jewish tradition and history as well as lessons on the weekly Torah portion.

Rabbi Zalman Deutch serves as Rabbi to Perm's 6000 Jewish residents at the foot of the Ural Mountains. For years he tried to convince a young community member to have a brit milah and break up with his non-Jewish girlfriend. Moshe, a descendant of the famed Rabbi Isaac Luria, was not interested. He did however agree to join STARS. Soon after, he asked the Rabbi to help him get circumcised. As he delved further into his learning, he decided to leave his girlfriend. That summer, Moshe joined the national seminar in Moscow where he met another STARS student, a nice Jewish girl from Saratov. As fairytale stories go, theirs is a happy one. After dating for awhile, they got engaged. The couple wed last summer in the first Jewish wedding in Perm.

More than 3500 miles to the east, Rabbi Yisroel Silberstein and his family live at the end of the Trans-Siberian Railroad in Vladivostok, Russia. Among his other programs, Rabbi Silberstein coordinates the local chapter of STARS. Since its inception four months ago, 20 students have joined, an impressive number in this city with a 99 percent assimilation rate.

"Statistically," he says, "this city is lost. But our programs, and particularly STARS, are creating a strong Jewish identity in our youth.”

He believes that “the most important part of the program is for the students to spend time with other Jews.”

The “strong Jewish identity” derived from studying Torah and Chasidic thought is what changed Maria Karetina’s life. She was inspired, she says, by the heroism of the Biblical Miriam. “And as my name comes from her name, I think that this story is closely connected with me and my way of life. Maria Karetina is no longer engaged to her non-Jewish boyfriend and is currently arranging advanced study in Israel.

Her plans for the future? I definitely know that I want to continue studying the traditions, history and religion of my nation, to get close to my roots and to G-d."

Related Articles
View All
Increasingly, American Adult Jewish Males Request Ritual Circumcision
(lubavitch.com/LNS)  “Culturally Jewish” is the self-described label offered up by Russell Harmon, a 19-year-old City Island, NY, native currently pursuing a degree in computer science…
In Russia, Prison Attitudes Change to Accommodate Religious Practice
(lubavitch.com/LNS) Sergey K., whose last name is withheld for legal purposes, is a 48 year-old inmate serving a long sentence in a Russian penitentiary near…
Campus
Two Universities React as Antisemitism Steps Out of the Shadows
While college administrators debate the limit of free speech, Chabad campus leaders take action.
Campus
Popping Bottles With Intention
“I’m still popping bottles, but instead of popping them at a bar or nightclub, it’s at the Shabbat table. It’s the same hustle but with…
Campus
Israeli Minorities Find A Platform at Stanford University Chabad
Less than twenty-four hours before it was due to begin, an event scheduled to take place at Stanford University’s Hillel facility earlier this week was…
Campus
In Irma Aftermath, Campus Chabad Stays Put and Open
"A disaster like Hurricane Irma can be frightening, but it also brings people together and highlights the wonderful community on campus."
Get Inspiration to your inbox!
Newsletter
Join our weekly newsletter for inspiration and updates
Donate
Find Your Local Chabad Center
Chabad
About Chabad-Lubavitch
About Chabad Lubavitch
The Rebbe
Headquarters
Magazine
Magazine
News
News & Updates
In The Media
Impact
Social and Humanitarian
Social and Humanitarian
Education
Education
Community
Community