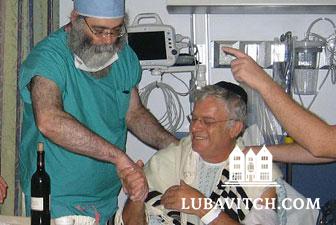 To circumcise or not to circumcise? Usually it’s a parent’s prerogative. When the decision falls into the lap of grown American Jewish men, a good number of them choose to enter the covenant with help from Chabad.

“Culturally Jewish” is the self-described label offered up by Russell Harmon, a 19-year-old City Island, NY, native currently pursuing a degree in computer science at Rochester Institute of Technology.

“I like the Jewish people. I like hanging out with Jews, the way they act, the morals they have,” he said. His Jewish mom told him most Jewish boys are circumcised at eight days old, but he was not. It didn’t bother him until he got to know many Jews, “and then it bothered me that I didn’t have this fundamental thing done.  No one treated me differently, but I felt like an outsider.”

Harmon didn’t have a family rabbi to turn to for assistance, so he didn’t do anything until a friend took him on a tour of Jewish places in New York. They stopped at a Hillel House. They sampled kosher restaurant food. They joined the Chanukah party at Chabad of Riverdale, NY, where Harmon met Rabbi Levi Shemtov. They spoke of Harmon’s dilemma.

“Logic does not account for the powerful pull that a Jewish soul must feel to be part of the covenant of Abraham. I cannot fathom it,” said Rabbi Shemtov.

Higher numbers of US Jews with delayed circumcisions can be traced to societal changes. Soaring rates of intermarriage put circumcision up for debate between parents. Even with two Jewish parents, Americans value choice and “letting the child decide when he grows up” is popular reason for skipping a ceremony on the eighth day of a newborn’s life. Still others are influenced by medical trends that swing to and fro on the benefits of circumcision. A recent finding that HIV rates were lower in circumcised men has added pluses in the pro column for those weighing the decision, so Rabbi Heller expects more calls.

Alex S., a law student at Touro College in New York, postponed his own bris because of information he found on the Internet. “The most thorough websites paint a terrible picture of circumcision,” said Alex. He went through with the bris at age 23. “In the end it was irrelevant, because I knew my own ancestors for thousands of years had it done and had enjoyed marital relations and functioned well.”
A few parents have come to Rabbi Heller with an older child because they thought a bris ceremony had to be accompanied by a bagel brunch for friends and family, and did not have the money for it. Parties are nice but optional, and “a mohel is not supposed to turn away families who cannot pay,” said Rabbi Heller.

Lack of funds kept Lee T., a graduate student at George Washington University, from pursuing his bris. “I had been trying to observe Shabbos since 18, and I knew [bris] was a big mitzvah, but to have it as an adult would be very expensive.” At Mayanot, a Chabad-Lubavitch affiliated yeshiva in Israel, Lee came across a Brit Yosef Yitzchak newsletter.

Since 1989, Brit Yosef Yitzchak, an organization started with blessings and guidance of the Lubavitcher Rebbe, has offered highly subsidized and often free circumcisions to 29,000 Jewish boys and men, mostly from the former Soviet Union. Once Lee produced his grandmother’s ketubah, proving his Jewish lineage, he was eligible for bris sponsorship.

“It’s step in the right direction,” Lee said. “I am glad that this organization was there to allow me to do it now instead of having to wait until I could afford it.”

Lee’s bris took place on Martin Luther King Jr’s Birthday. It’s hard to imagine the civil rights leader ever envisioning his day of birth as being chosen for this purpose, but it was convenient. Lee was off from school and work. Healing from the procedure has been smooth.

Adults generally go back to work the same day, but full recovery typically takes up to six weeks. One particularly headstrong fellow rode his bicycle home afterward, but Rabbi Heller does not recommend this course of action. Quick rebounds from the procedure may be attributed to the precision of an experienced mohel and the minimal anesthesia – local, not total knockout – needed for a painless bris.

Weighing the bris decision took Harmon four months. Like many adult bris candidates, he was not planning on becoming more observant so that was not a deciding factor.  He asked female friends if they had a preference, and came up without a definitive answer. Finally, he decided in favor of the bris. “I didn’t want to feel awkward within myself around other Jews,” he said. Last spring, Rabbi Heller performed the milah for Harmon. It has had an impact on his identity.

“Now I am more comfortable as Jew.”