The Great Jewish Food Debate Comes to U. Penn 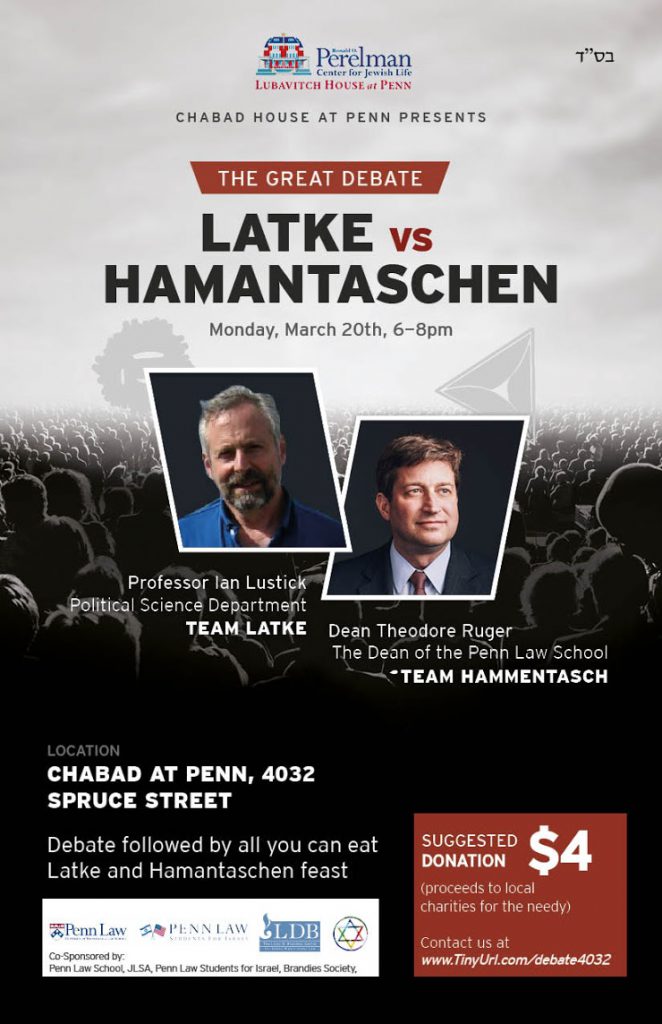 University of Pennsylvania will witness its first-ever Latke–Hamantash Debate debate at the Chabad House at Penn.

The March 20th debate comes a week after the Jewish holiday of Purim, which fell during Penn’s spring break this year and which is celebrated with levity and merriment annually.

The deliberately humorous Latke–Hamantash debate, first held at the University of Chicago in 1946, has become an annual tradition at universities across the U.S. For the past 71 years, philosophers, noted academics and Nobel laureates have come to argue whether the Hamantash, the pastry traditionally eaten on Purim, is greater than the Latke, the potato pancake eaten on Chanukah.

In past debates, the merits of each food have been contested. Professor Alan Dershowitz at the Harvard University debate in 2007 accused the deep fried Latke of increasing the United States’ dependency on oil, while at the MIT debate in 2011, particle physicist Allan Adams brought evidence in favor of the Latke from his Latke-Hamantash-Collider (LHC) model. The dean of MIT’s School of Science, Robert J. Sibley, also sided with the Latke, explaining how it makes up 21% of the universe’s dark matter.

While it seems that most contenders side with the Latke, the Hamantash, a pastry fashioned after the villainous Haman’s three-cornered hat, has received some support. Harold Tefler Shapiro also sided with the Hamantash while he was President of Princeton University.

It remains to be seen which delicacy will win this March at the Penn Chabad’s Debate. Ian Lustick, Political Science professor at Penn and member of the Council on Foreign Relations, will be arguing for the Latke while the Hamantash will be argued by the Dean of Penn Law, Professor Theodore Ruger.

Some question the ability of the participants to contend this debate, however. “I’m not sure that political science academics are appropriate for this debate,” said Rabbi Levi Haskelevich, Associate Director of Lubavitch House at Penn. “This is a heated issue and it should be debated by people who are opinionated and used to taking strong sides on sensitive subjects. Political scientists are way too laid back I worry they will just agree with each other.”

While some wonder if the Hamantash-Latke debate can ever be resolved, Aaron David Miller, former negotiator for the Israeli-Palestinian conflict, has said that “it is a debate that’s simply too important to abandon.”

The debate is scheduled for Monday, March 20th, 6-8pm at Chabad House at Penn, 4032 Spruce Street, Philadelphia and will include a suggested $4 donation to charity to JRA. There will be an all-you-can-eat Latke and Hamantaschen buffet after the debate.

Co-Sponsors of the event include Penn Law School, Penn Law Students For Israel, Penn Law Chapter of the Louis Brandeis Center, JLSA, and the Debate team.

To learn more about Lubavitch House at U. Penn, visit www.lubavitchhouse.com.