Although the latka did not pan out, sources say it was “actually quite good.” 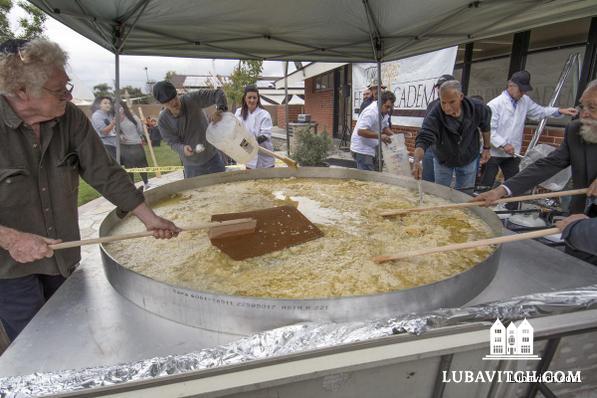 There’s no such things as too many cooks in the kitchen when it comes to the world’s biggest latka.
Photo Credit: Photos: Jeff Gritchen, Orange County Register/SCNG

Bring on the puns: Huntington Beach community members, along with students and faculty of Hebrew Academy, took the adage “go big or go home” very seriously on Friday as they attempted to fry and flip the world’s first 7-foot traditional Chanukah latka.

“It’s all in the spirit of Chanukah,” said school Dean Rabbi Yitzchak Newman prior to the event. “The festival of lights celebrates a miraculous jar of oil that lasted for eight days, and the custom is to eat foods fried in oil.” The rabbi added that as one one of the only schools on the west coast to win two blue ribbons from the Department of Education, “Hebrew Academy is the best in the nation, and we plan to make the biggest latka in the world. People think you make one latke that lasts one day, but we plan to have one latka that lasts eight.”

Newman organized what he calls his “dream team,” a group of community members who helped get the latka bubbling: metal fabricator Ralph Labelson, who built the 7.5-foot diameter frying pan, restaurateur Bob Rosenberg, who took charge of the frying, and propane and pipe supplier Sam Newman.

Hebrew Academy’s 300-plus students helped prepare the latka mixture—five gallons per class—and the math class calculated the necessary volume of batter. The recipe: 90 pounds of potatoes, 208 eggs, 42 cups of flour, 30 teaspoons of pepper, and a life-sized pinch of salt (84 teaspoons), fried in 35 gallons of oil.

The frying took place at Hebrew Academy’s pre-Chanukah celebration this past Friday, which featured a grand menorah lighting on Chabad’s 18-foot menorah and was attended by Congressman Dana Rohrabacher.

Unfortunately, the combination of cold, rainy weather and a driving wind did not bode well for the latka, causing oil temperatures to fluctuate at around 200 degrees Fahrenheit when they should have been closer to 400. After four hours of frying, the cooks threw in the towel when uneven temperatures caused potatoes to clump together, leaving an overcooked center and an undercooked outer ring, along with hundreds of little latkes that floated around the pan. No need to fret about anyone going hungry, though: part of the latka was edible, and organizers say it was actually quite good.

Steve Greenspan, who aided in the latka attempt, is not deterred by the latka’s failure to fry. “I don’t want to give anything away, but we are going to try to set another world record,” he told the Orange County Register.

Dean Newman agrees. “Chabad does not get deterred by setbacks nor give up on its goals,” he says. “Hebrew Academy Chabad is already planning to accomplish this feat sometime in the near future.”

The current world record for largest latka is a 4-foot-11-inch-diameter latka made in Dublin, Ireland in May, 2015.

To learn more about Hebrew Academy, visit their website at Hebrewacademyhb.com.