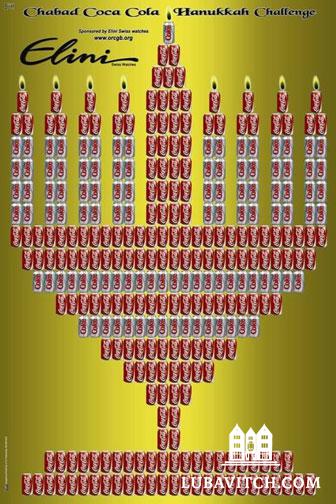 A Menorah made of Coca Cola tin cans.

Chabad and Coca Cola are ubiquitous—both seem to crop up just about everywhere you go. But the cans! How to recycle those empty metal cans is a concern of every eco-sensitive Coco Cola guzzler.

Dudi Kaplan, a rabbinical student working with the Chabad-Lubavitch representatives in Golden Beach, Florida, had a brainstorm that would not only keep the streets clean of trashed Coca Cola tins, but would actually turn them to laudable usefulness.

Imagine a thousand cans illuminating mother earth with light and warmth instead of adding to the litter and pollutants of its environs. Kaplan, with Chabad of Golden Beach, launched a creative Chanukah competition that allows only glue and metal wire to be used in crafting Menorahs exclusively out of used Cola cans.

Among the 100-plus Chabad-House communities Florida-wide, and now quickly taking off in Jewish communities everywhere, adults and children are busily designing, stringing, gluing and hammering those red and white tins into menorahs worthy of public display.

The contest will run until December 19 when the winning Menorahs will be awarded prizes by Elini, the Swiss watch company that is sponsoring the competition. To learn how you can participate in the contest, contact Dudi Kaplan at: 1-646-591-8503.