Chabad representative is recognized for her remarkable contribution to the community. 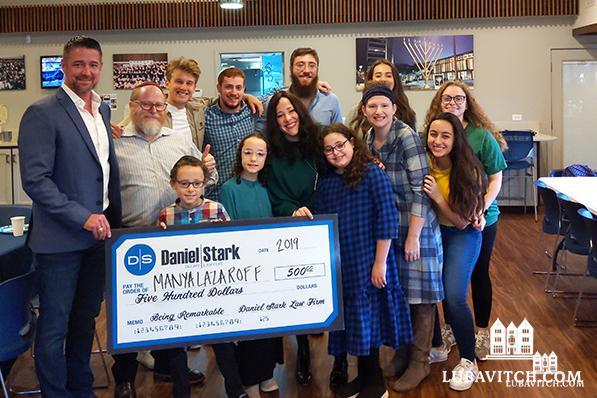 Manya Lazaroff, director of Chabad at Texas A&M University, was caught by surprise.

She was in the middle of a meeting when a crew from KBTX-TV arrived at the Rohr Chabad Jewish Center to present her with the ‘Be Remarkable’ award on December 12th. Since July,  Daniel Stark Law and the TV station have given the award to nine Brazos Valley residents “who do remarkable things.”

Kaitlyn Smith, Brand Manager at Daniel Stark P.C. says that when they launched their campaign they received 300 initial nominations for remarkable Brazos Valley residents. Manya was one among them. Yet Manya is only the tenth local to receive the bi-monthly award. She was nominated by Allison Nagelberg of New Jersey whose son, Cory attended Texas A&M and by Lindsey Guindi, a local community member.

“What was so noticeable about Manya was that even a basic google search revealed comments and posts from people who were touched by and appreciative of Manya’s personal care,” Kaitlyn shared with Lubavitch.com.

In the TV clip of her award News 3’s Rusty Surette describes the center, nestled in the College Station neighborhood as a “home away from home for Jewish Aggies (the nickname for students at Texas A&M.) Inside, students are treated to a home-cooked meal and treated like family. And in this family, Manya is the Mom,” he says.

Manya takes that title seriously as she cares for her Aggie family and the larger Bryan-College Station communities with unbounded love and energy. It’s all part of the agenda that brought Manya and her husband, Rabbi Yossi to Texas in 2007. “Our goal is that after four years here you walk out a stronger, healthier, more empowered, more educated Jew.”

Whether it’s sending hot chicken soup to a student, or community member who doesn’t feel good, or providing a listening ear, or a shoulder to cry on for those going through a hard time, they keep their eye on that goal. (“She remembers my birthday, even five years after my son graduated,” Allison says.) Manya teaches Torah classes, hosts Shabbat and holiday dinners and parties, arranges a zumba class, a cooking club, women’s ‘Torah and Tea’ sessions and a Hebrew school. She pioneered an initiative to bring awareness to and support for those struggling with mental wellness with the same aim in mind. 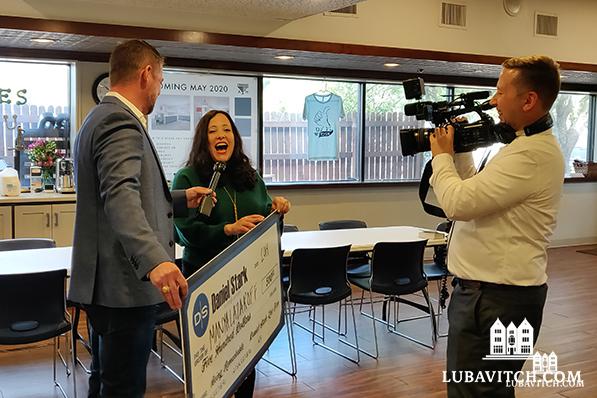 “The Chabad philosophy is that we don’t beat darkness with a stick. We shine a light so that someone can bask in it, and find their inner light and walk on stronger,” Manya says. With warmth and acceptance she hopes to be the light that will bolster college students struggling with their mental health to go forth and shine their own lights.

“She strives to create meaningful relationships with a broad spectrum of students and community members. She opens up her heart, she opens up her home and provides inspiration to everyone she meets, and changes lives through her mentorship,” Lindsey shared with the law firm.

“You meet them for even one hour and you’re blown away by their warmth and love,” Allison tells Lubavitch.com. “Manya is unflappable, I don’t know how she does it. There are people waltzing in and out of her home and she will drop whatever she is doing to spend time with someone who needs her.”

The Lazaroffs do all this while raising their six kids. Their youngest are 10-year-old triplets.

This Mom though, won’t take all the credit, emphatically insisting that everything that happens at Chabad is a team effort. “We run on support from other people. It’s not about me, it’s about the team – the Rabbinic Fellows who assist us, our family, the students, alumni, parents and our generous donors. We’re just the feet on the ground,” Manya says. She also makes note of the support of her sister representatives, creating Chabad on Campus ‘homes-away-from-home’ on over 260 college campuses around the world.

“The reassurance she’s providing for parents, the home she is providing for the students, all this is remarkable,” says Kaitlyn. “She has a large family, but is creating an even larger family and they are lucky to have her.”

Once again, Manya asserts, “we’re not remarkable, we’re representatives of the Rebbe, who are part of a team of the world network of shluchim making sure every jew has the spiritual, emotional, and physical support they need.”

And Allison is confident they’re doing that. “Chabad is obviously a religious organization, but it quickly becomes part of your social life, your community. It becomes integral not just to college life, but to your life as a whole.”