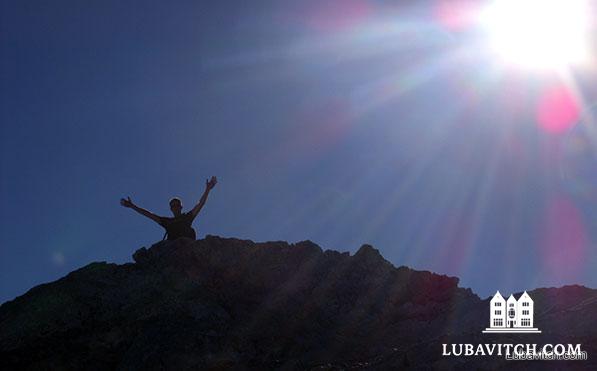 Lubavitch International invites five Chabad representatives to weigh in on an success.

We were young Chabad representatives, having just opened a Chabad House on campus, and I was trying to envision the future, and it struck me that success meant more problems to solve!

Our grandfather, Rabbi Sholom Posner, was one of the first shluchim in America, sent

to Pittsburgh to open the first Jewish Day School. I realized that Zaidy was in his 40’s—hardly the age to start a career—when he embarked on this trail-blazing project. True, said my husband, but he was already a successful chasid.

There seems to be a dichotomy between these images: Success on the institutional level measures numbers—of people, finances, buildings, campuses, etc. Success on the personal level almost seems to shun those outer trappings. So which is it?

When the Rebbe received the key to our Chabad House, he said: “A candle for one, is a candle for many.” The same effort we invest in illuminating the life of one person can illuminate the lives of many, even  a whole community. If I succeed in reaching one person, I may have possibly reached many more.

My job is to be that candle, and to shine a strong light. And with that kind of success, even the problems are good.

Aviva is co-director of Chabad of CT and Western MA and founding director of the award-winning Gan Yeladim Early Childhood Center in Stamford, CT.

Working in an adult community, my life is enriched as I learn from friends who have the benefit and wisdom of hindsight.

The idea of “success” applied to an individual is naïve at best, and possibly an arrogant assumption. Who can say who is a successful person? For that matter, who decides how to measure success? Far too often, we judge an individual as being “a success” based on external factors—career, family, income—blessings over which we have no control. Are we right to take good health, good children and prosperity as the mark of “a successful” individual?

These are G-d’s blessings for which we owe gratitude and humility, not self-congratulations.

Success, it seems to me, should be reserved for specific, measurable projects, not people. Did I complete this task as best as I could have? Did I put the talents that G-d has blessed me with to work today to make a difference to another? Have I fulfilled my responsibility towards those who depend on me today?

These are the questions I need to ask myself at the end of each day. Considering success this way propels me to stay honest while challenging me to do better in the details that fill the larger picture of my life.

Eliezer is Director of Chabad Jewish Center of Monroe, NJ since 2002 and the author of many books on Chabad history and the Rebbe’s teachings.

I’ve always wondered why our Sages never clarified the definition of success. The Mishna defines the “rich” person, the “smart” person and the “strong” one. Yet, for some reason, the “successful”person didn’t seem to make the cut.

Perhaps in ignoring “success” as a term deserving of discussion, the Mishna was making a point. Maybe the Sages completely rejected the very notion that success is to be pursued and desired in this life.

If success is the culmination of effort and good fortune, then upon achieving success, life should end. With their silence, the Rabbis teach us that only after we’ve taken our last breath in this world, only then can we judge whether or not we were successful.

As long as my heart beats, I need to push forward to achieve success. Overflowing bank account or not, if I’m still alive, isn’t there a reason for it? Isn’t there something that I still need to do?

Benny lives with his wife and four children in Cabo, Mexico, where he runs the Chabad Cabo Jewish Center. During down time, he also follows his passion for music.

Success is a very tricky word. We live in a material world in extremely materialistic times so the way we judge success can sometimes be clouded.

When I was a young yeshiva boy I would read stories about “successful shluchim” who were out there transforming their cities, building large communities, and sometimes, about the lucky ones who built magnificent campuses.

Then I got older got older and finally went on shlichus. I quickly learned that success meant something else. A shliach looks to inspire Jews and enrich their spiritual lives. When you make a meaningful connection with another individual and realize the impact you are making, you feel like you’ve had “success.”

Then I got even older and had the benefit of rear view vision. I was able to look back at the first 17 years of shlichus and reflect on what we had done. Today I see success as simply being on shlichus. If I get up every day and fill my time with shlichus work, I consider that success.

The dictionary defines success as: “the accomplishment of an aim or purpose.” So I think the question really is: “What exactly is my aim or purpose?” Once we know the answer we know how to define success.

Hirshy and his late wife Rashi, of blessed memory, founded the Chabad center in Alpharetta, Georgia, in 1998.

Is success the completion of a huge project, a culmination of many months planning, coordinating and late nights? The rush of adrenalin I get when I have managed to complete a mammoth task in a tiny amount of time? Perhaps it is the thrill and pleasure of teaching material that animates my students as much as myself. Wonderful as those moments might be, success means something more to me.

Before beginning that project or task, there was something else: some sort of hesitation, a previous failure, some kind of ending.  Maybe the end of a school year, leaving a job, a friend moving away. It might be a little dream or fantasy dying inside us, and maybe not feeling quite ready to face the new reality. But that ending also signifies a new beginning and with that, the ability to create something new.

Winnicott, British pediatrician and psychoanalyst, writes that the search for the self is doomed and will ultimately be unsuccessful if we get stuck with “waste products.” It is too easy to get stuck and not move past the endings or failures in life. Success is the creativity that enables me to get past whatever is holding me back from getting there. Success is the journey, not just the end.

Freidy has been shlucha in Oxford, UK since 2001. A mother of six, she has a masters degree in Psychodynamic Practice, University of Oxford.

Related Articles
View All
Editorial
Not by Fear But by Faith
The Rebbe’s Vision for a Just Society
Editorial
A Time to Heal
When the doors of Chabad Houses closed, and shluchim adopted social-distancing guidelines, we wondered how this edition of the magazine would take shape. More importantly,…
Editorial
Do We Need Anti-Semitism To Keep Us Jewish?
Swados asked the Rebbe whether it was his opinion, then, “that the tragedy was not a unique visitation upon the Jewish people, and that it…
Editorial
Soul Lights
Sitting with the Rebbe’s shluchim at the closing session of the Annual International Conference of Chabad Lubavitch Emissaries near the end of November, I felt…
Get Inspiration to your inbox!
Newsletter
Join our weekly newsletter for inspiration and updates
Donate
Find Your Local Chabad Center
Chabad
About Chabad-Lubavitch
About Chabad Lubavitch
The Rebbe
Headquarters
Magazine
Magazine
News
News & Updates
In The Media
Impact
Social and Humanitarian
Social and Humanitarian
Education
Education
Community
Community