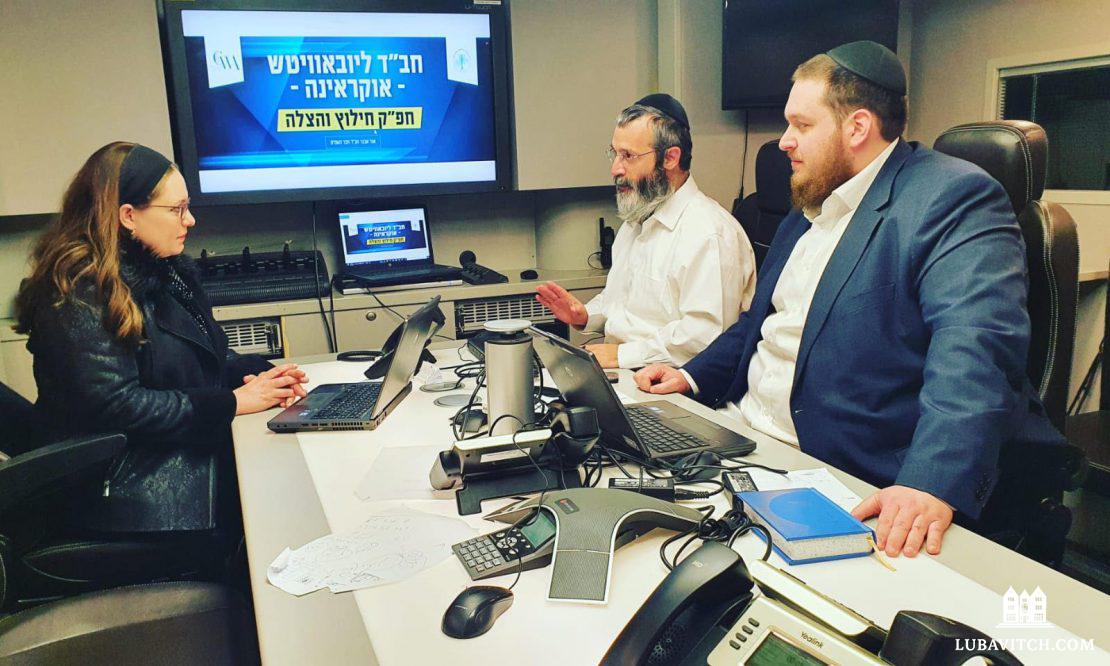 Sivan Rahav Meir is an Israeli journalist, news reporter, and TV and radio anchor. Last week she traveled to Kfar Chabad to speak with Rabbi Shlomo Peles, a key figure in Chabad’s response to the Ukrainian war and refugee crisis. Here we present Sivan Rahav Meir’s account of the meeting.

It was almost midnight when I walked into the fully equipped Crisis Management Room. Magen David Adom has situated their mobile command center in the middle of Kfar Chabad, decked out with dozens of telephone lines, web cameras, and communication devices. Rabbi Shlomo Peles was sitting in the middle, speaking over Zoom to someone in Ukraine. Next to him sat Simcha Levenharts, who had just arrived from Ukraine after a thirty-hour train ride.

“There were three hundred people in a one-hundred-person train car; everyone just wanted to escape,” he told me, still shaken. “We sat on top of each other.” He continued, “We have a baby girl, but we could not take her carriage. We couldn’t even take a car seat. I took turns with my wife for thirty hours, holding her.”

But I’m not just here to listen to personal stories, even if they are painful. I’m here because the name Shlomo Peles has come up in every conversation I’ve had with officials about Ukraine. Officially, he is the “Director of Security for Chabad Emissaries.” In practice, he’s emerging as a key figure in this historic drama. The National Security Council, the Ministry of Foreign Affairs, the American Jewish Joint Distribution Committee (known as “the Joint”), and the Jewish Agency are all in constant contact with Peles. He has the hottest and most accurate information from the field.

“The war began on the 24th of February,” he told me, “but it began long before that from our point of view.” Peles’ team was able to make some preparations. “We told everyone involved two things,” he said, “first of all, they will try to bring down the means of communication. That’s why we purchased satellite radios for all the communities ahead of time.”

“I learned my lesson from the recent riots in Kazakhstan when we lost contact with the Rabbi there, so I wanted to make sure that didn’t happen again. So yesterday, for example, when the entire city of Kherson was without internet, Rabbi Yossi Wolff was the only one with communication to the outside. It’s our backup.”

The second thing, he says, is money. “I remember meeting with Jewish organizations from America, who promised they would send money if anything happened. But who’s to say the banks will keep working? And you never know if they’ll convert dollars into the local currency. So we did something that seemed primitive. We took out large amounts of money in cash, Ukrainian hryvnias, and kept it in safes. Throughout Ukraine, it proved extremely useful. It allowed us to pay a train driver in Kharkiv immediately and in cash, or pay an exorbitant price to charter a bus out of Kyiv.”

I ask him what’s next. “Only G-d knows what will happen next. This whole episode could end tomorrow, and everyone will return to Ukraine. Did you know that people left the keys to their homes with their community rabbis when they left? The rabbis are still there, holding the people’s keys for who knows how long.”

“I think that if it ended tomorrow, the entire world would invest heavily into Ukraine and rebuild it into a real jewel. But it could also, G-d forbid, turn into a massive refugee camp. That becomes more likely the longer the war goes on. Already we’re in the third week, and most of the world gets up in the morning and goes to work or sits in a cafe, like normal.”

In the meantime, he says, we need to know how to seize an opportunity. “There are entire Jewish communities that need a new home. Why don’t we bring them here? People in Israel don’t seem to know, but communities worldwide are inviting them to come.”

Peles shows me videos, advertisements really, that even small communities in Europe and Australia are putting out. In Rottweil, Germany, one community promises: “Help arranging documents, travel costs and assistance finding housing and kosher food.” He shows me a community in Italy offering free food and housing for half a year and free education at local schools.

“Many small communities realize they can use this moment for growth,” Peles tells me. “But the Lubavitcher Rebbe said we should not replace one exile with another. There is an opportunity here to bring these communities together in Israel. Israel needs to incentivize communities to come here.”

He cites the example of the community of Zhytomyr. Rabbi Shlomo Wilhelm left the city with his community of one hundred fifty people, including an orphanage. The Prime Minister welcomed them at Ben Gurion Airport. Now they are staying at a hostel together as a community. It’s a model that has a much better chance of succeeding. Every community should be presented with the chance to move somewhere together, as a community. “I don’t care if they go to the Maalot neighborhood in Jerusalem or to a small moshav in the Lachish area; we need to build solutions. We can’t be throwing everyone out to deal with these problems alone.”

But of course, many are not going to leave Ukraine. I ask Peles about the people who stayed behind. He says there’s another danger, in addition to the concern that people will be harmed in the fighting. There is a very real fear that people will simply starve to death. “As we look to the future, we’re dealing in food supplies. The main priority is to be able to transport food to even remote villages. In my opinion, starvation will soon become the greatest danger facing the people of Ukraine, outweighing the danger created by the bombing.”

I left the Crisis Management Room at one in the morning, just as the first pictures were finally coming in from the hotel in Warsaw that Chabad had rented for Dnipro’s Jewish community. Rabbi Peles smiles and shows me the images. They all arrived safely. At the same time, he receives an advertisement directed towards all the refugees from Ukraine now in Israel. It invites them to a grand Purim party in Kfar Chabad. “There’s nothing like Purim to revive spirits,” Peles says. “They need that now. We’re fighting a war to keep up their spirits, faith, and optimism for the future.”

To donate towards the Chabad Ukraine Relief and Rescue Efforts in Ukraine, click here.