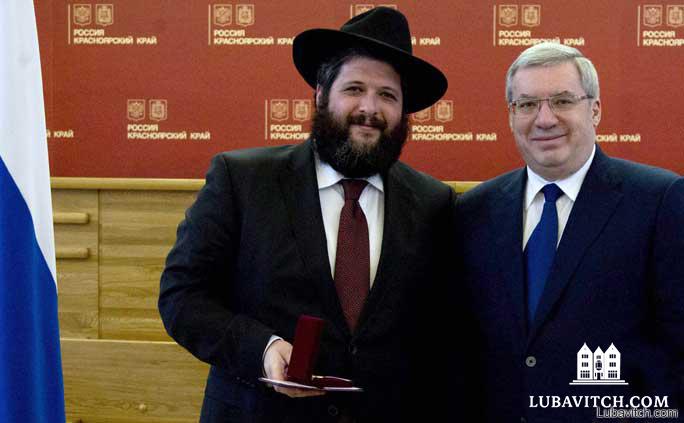 The Krasnoyarsk Krai province honored eighty people who “have devoted themselves to the benefit of the region,” including the city of Krasnoyarsk’s chief rabbi, Rabbi Benyamin Vagner.

The Siberian province is the largest in Russia, and is marking its eightieth anniversary with new infrastructure and the development of the province’s rich resources.

A week before the province’s anniversary, Viktor Tolokanski, the region’s governor, honored, the local Chabad representative.

Rabbi Benyamin and Dina Vagner have led the Jewish community’s revival, and today, a Jewish center, a synagogue, a preschool, an afternoon Jewish school, regular classes, humanitarian assistance and a slew of clubs for all ages ranging from Jewish music to art, contribute to a dynamic Jewish experience for the city’s five-thousand Jews. An educational campus that will house schools from kindergarten to post high school, is now in the works.

“It is not only an occasion to take stock of our triumphs and past distress, it is also a starting point for further achievements,” Tolokanski said at the event.