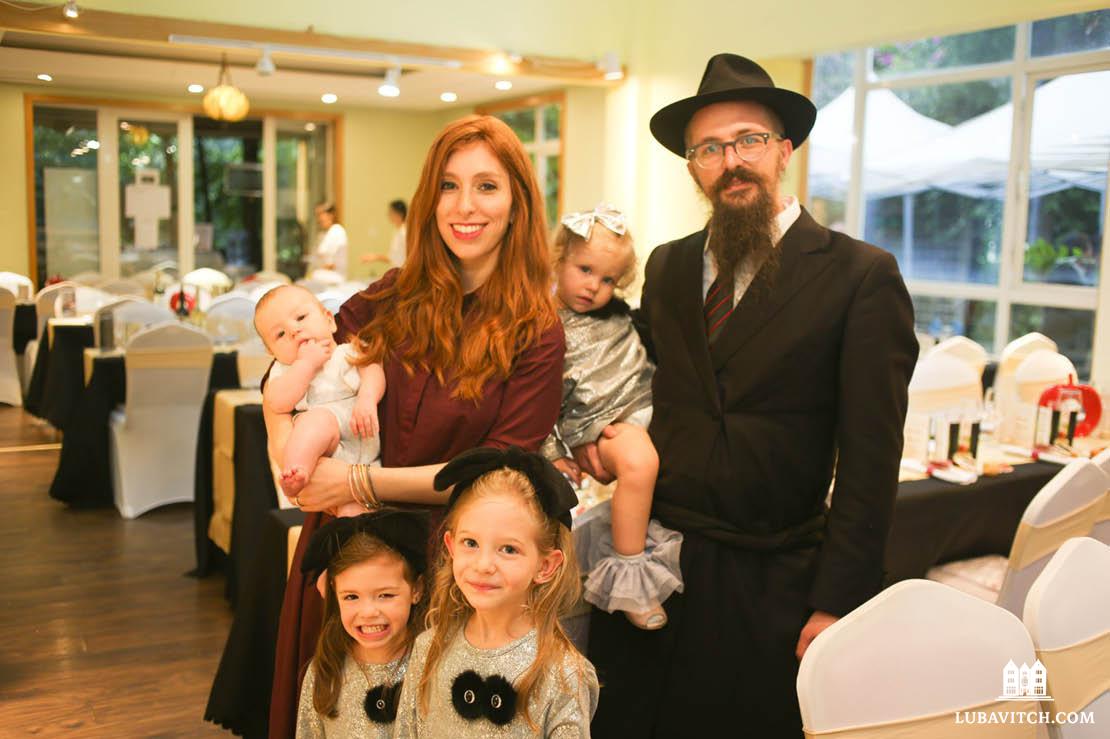 One of the most populous cities in Western China, Chengdu is the thriving capital of Sichuan Province. Today, out of a population of more than 14 million, about forty-five individuals are Jewish. That’s less than one one-thousandth of one percent. But for the Chabad shluchim there, that’s reason enough to be in Chengdu.

When the coronavirus began to spread in the city, authorities imposed a lockdown, and government officials made twice-daily rounds, checking in with every residence. Anyone found to have a fever was immediately removed from their home and taken to one of the city’s provisional hospitals. At first, Sarale and Dovi Henig, the Chabad shluchim in Chengdu since 2012, planned to stay put with their four children and serve the handful of Jews who had not fled the city.

Lubavitch International: What made you decide to leave?

Sarale Henig: Things took a serious turn mid-January. We realized that this pandemic was not going to be like SARS in 2003. So we encouraged all of the four hundred Jews living in Chengdu at the time—mostly young families and students—to return to their home countries. Only seventeen Jews remained, and we felt that as shluchim, we should remain with them.

But several weeks later, as the number of infections spiked and harsh measures were enforced, we realized it wasn’t safe for us to stay. If one of our children—like our baby—was to come down with a fever as teething babies often do, authorities would simply remove him from our home. So we sought the advice of rabbis. They told us to leave immediately.

It was only a matter of time before the airports would be locked down, so we had to move fast. We quickly booked tickets for ourselves and our preschool teachers to Israel via Frankfurt, Germany. Our flight was Saturday night. As soon as Shabbat ended, we threw some clothing into suitcases. I didn’t even have a chance to clean up. We made it out on one of the last flights from Chengdu.

We were relieved when we finally landed in Germany. But then, as we were about to board our flight to Tel Aviv, we were informed that travelers coming from China would not be allowed on. Thankfully, the U.S. was still open to us, so we changed our itinerary. After three days of travel with no kosher meals on the planes, tired and hungry, we finally arrived in New York.

What were your thoughts once you were safe in New York?

We left our lives and our home in Chengdu abruptly. We had no time to make plans, and no idea what the future held. We didn’t know what would be from one day to the next. This was just the beginning of a very difficult, unsettling ten months. We lived out of suitcases, our lives in limbo.

Everything we’d worked to create in Chengdu—a Jewish kindergarten, a kosher restaurant, Jewish study classes, a thriving Jewish community—all of it was gone. The Jews who left were not coming back.

Still, a small handful remained, and we wanted to be there for them. Feelings of regret tormented me. Perhaps we should never have left. I felt like my life had come undone. In Chengdu, I felt that I could keep giving, and now I felt depleted. Maybe, I thought, our work there was over?

How did you make it through this difficult time?

My husband and I went to the Ohel very often. We’d go in the middle of the night when nobody else was there. I cried. I poured my heart out at the Rebbe’s resting place. I turned to Chasidic teachings. I needed to deepen my faith. I prayed more. I wanted to understand what the Rebbe would want us to do.

After ten agonizing months, China began issuing special visas to select applicants. We applied and were repeatedly denied. Finally, we were granted a special extension on our previously valid visas. We decided to return. We traveled to Shanghai (a three-hour flight from Chengdu) and began our voyage home.

Clearly, you felt your place was back in Chengdu.

Yes, we did. But, it wasn’t an easy homecoming. After sixteen hours in the air, our flight landed. The pilot turned off the engine. I had no idea of the nightmare that awaited us.

Government officials boarded the plane and began a painstaking, slow, disembarkation process. They went row by row, checking each passenger one at a time, before allowing them to begin a battery of COVID tests. Only then would they be allowed to enter the country and go straight into quarantine for two weeks at a government-run coronavirus hotel.

We were seated in the back row of the plane. There was no air conditioning, and it had become extremely stuffy. After three long hours, our turn finally came. We collected our bags and held our breaths as we walked through the full-body temperature-scanning machine, one at a time.

To my horror, the beeper went off. My blood froze. Our two-year-old son had become overheated during our wait on the plane and his body temperature had risen.

The officers pounced on us. “We will be taking your son to the hospital,” they said flatly. I argued, but there was no discussion. I begged. I cried. Let me at least accompany him, I pleaded. They finally relented. My son and I were whisked off in an ambulance to an unknown destination, while my husband and our three older children were taken to a quarantine hotel.

My son and I were taken to a hospital that seemed more like a prison. We were led into a small room that had only a bed—no bathroom or sink. The door was triple-bolted behind us. We were to wait there for forty-eight hours. My son, whose “fever” had already subsided, sat on the bed surveying our dismal surroundings. I couldn’t contain my sobs. What are we doing wrong? What did Hashem want from us?

Were you or your husband able to make contact with your colleagues, the shluchim in Shanghai and Beijing?

Yes, and we are eternally grateful to them. Rabbi Shalom and Dini Greenberg and their friend Dr. Eva intervened, and after several hours we were transferred to a more humane hospital where we waited out the rest of the mandatory two-day observation period. Thankfully, we didn’t have COVID, and were allowed to join the rest of our family in a quarantine hotel soon after.

The Greenbergs prepared and delivered fresh hot meals to us each day. Rabbi Shimon and Dini Freundlich, shluchim in Beijing (1,100 km away), had themselves recently returned to China and quarantined at a similar hotel. They knew exactly what was needed and sent us a beautifully prepared package, including a mini-fridge, portable washing machine, disposable dishes, hot-water urn, hot plate, and toys.

I should add that as shluchim to Chengdu, my husband and I often received frantic calls from foreigners who had landed in the hospital. My husband would drop everything and go visit them with food and other provisions, often remaining with them for hours until he was sure they were comfortable and had everything they needed. Now we had our own taste of the sheer terror, anxiety, helplessness, and loneliness those people feel. It is our privilege as the Rebbe’s representatives to act as a lifeline for someone in such a terrible situation.

Our work has completely changed. With no students, businesspeople, or tourists slated to arrive in the foreseeable future, we are enjoying lots of personal interaction with the few Jews who live locally. Now that we have finally returned home, and are able to provide for the community’s material and spiritual needs, it is clear to me that this is where we are needed. We have a mission to accomplish in Chengdu.

Related Articles
View All
China
A Final Passage, From China to Israel
A Jewish man dies alone in Suzhou, China. Chabad engages an international effort to prevent cremation and bring his body for burial to Israel. To…
Get Inspiration to your inbox!
Newsletter
Join our weekly newsletter for inspiration and updates
Donate
Find Your Local Chabad Center
Subscribe
|
Log In
Chabad
About Chabad-Lubavitch
About Chabad Lubavitch
The Rebbe
Headquarters
Magazine
Magazine
News
News & Updates
In The Media
Impact
Social and Humanitarian
Social and Humanitarian
Education
Education
Community
Community