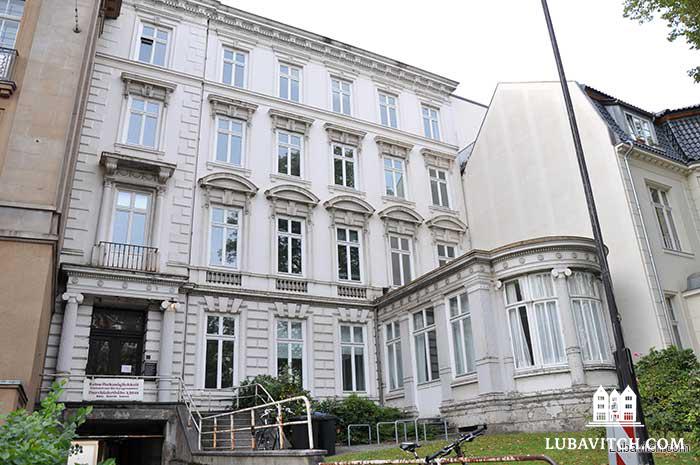 The future location of the Rabbinical Institute of Hamburg.

In some significant way, the opening this month of a kollel, a rabbinical seminary in Hamburg, Germany, harks back to its glory pre-war days when the city was graced by distinguished rabbis. It is yet another of many signs of the recent rise of Jewish life in Germany, much of it due to the Chabad centers—nearly 20 of them—across the country.

“Before WWII there was a thriving Jewish community with a center for Jewish learning where people had the freedom to sit and learn whenever they wished,” says Rabbi Shlomo Bistritzky, the Chabad representative to the city. “We want to give people here the opportunity, once again for full time Jewish study while supporting them and their financial needs.”

Bistritzky, whose grandfather resided in the city before they fled during the Holocaust, heads the local Jewish day school that was shuttered and reopened in 2007. Today the community has all the amenities of a Jewish community that the city’s Jews enjoyed in its pre-war days.

The institute will offer a three-year track for married men who want to receive rabbinical ordination. Bistritzky, who serves as city’s chief rabbi, is still getting the word out to prospective students. This week, several rabbinical figures, including the former chief rabbi of Israel, Rabbi Shlomo Amar, will be delivering classes in person and via video conference.

“Our city was once a very respected center for rabbinical figures whose influence spread across the entire Europe,” David Tsaturov, who is funding the project, told lubavitch.com. “This was a place where hundreds of scholarly volumes on Judaism and Jewish law were written, and it should once again be a central location for Jewish scholarship and study,”

The new center will have daily prayer services and locals will be welcome to walk in and learn with one of the students. As part of their training, the students will serve the spiritual needs of Jews in other parts of the city where there is no synagogue, especially on Shabbat and Jewish holidays.

Related Articles
View All
In Hamburg: Holocaust Remembrance Every Day
In Germany, civil authorities choose to honor the memories of the 6 million on the anniversary of Kristallnacht and the liberation of Auschwitz-Birkenau. Yet even…
Boutique Dairy Farm in Germany Goes Kosher
Germany’s kosher consumers can now enjoy a full line of locally produced boutique cheeses and milk that come from a small dairy farm near the…
Jewish Life in Germany 70 Years After Kristallnacht
(lubavitch.com) Survivors of Kristallnacht will tell you that they remember the flames. Fires shot out of the roofs of synagogues and the smell of burning…
Bundestag President: Public Menorah Lighting A Sign of A Changed Germany
Use the preview site to make sure the text you enter here fits.
Education
Remembering Rebbetzin Chana: Jewish Feminine Role Model
A feminine role model of Jewish activism and proponent of Jewish scholarship, is being remembered today, on her yahrzeit.
Education
Beginning With Shabbos
Start the children’s school day right, and the rest will follow.
Education
Jewish In Berlin And Scoring High
If Jewish parents in Berlin worried that sending their children to a traditional Jewish school would leave them with compromised scholastics in math, history, and…
Education
Florida Schools Set for Silent Start to the Day
Landmark bill passed with bipartisan support will mandate a moment of silence for 3 million public school kids.
Get Inspiration to your inbox!
Newsletter
Join our weekly newsletter for inspiration and updates
Donate
Find Your Local Chabad Center
Subscribe
|
Log In
Chabad
About Chabad-Lubavitch
About Chabad Lubavitch
The Rebbe
Headquarters
Magazine
Magazine
News
News & Updates
In The Media
Impact
Social and Humanitarian
Social and Humanitarian
Education
Education
Community
Community